For the past few days, we've been parked at the Farmington, NM, Elks lodge. Being members, we often stay in the parking lot of Elks all over the country, usually for a voluntary nominal donation. The members are invariably welcoming and helpful. This lodge has four water and electric hookups for visiting Elks, but they were all full when we arrived. Imagine our surprise when we were informed that the 'donation' here is a required $15 a night, even though there were no hookups available. As fulltime RVers know, that is an outrageous amount just to sit in a parking lot. If we had known beforehand, we would have stayed at the local casino. Enough complaining.

Farmington is a larger city than I expected. It has everything you need and even two super Walmarts. We've been doing those necessary chores - laundry, vacuuming all that sand from the three days of wind, and repairs. The furnace quit one day so Ron took it apart and diagnosed a bad circuit board. Unbelievably, the first RV sales place he called had one in stock. He replaced it and it's working fine. What a genius! Of course, nothing ever goes that smoothly and the process was much more involved than it sounds. I was certainly glad he fixed it since the nights here have really been cold. One morning it was 28 outside and 33 inside. I wonder if the fridge works in reverse then.

Today we went on a field trip to the Aztec Ruins about 15 miles east of here. When I read about the site, I thought, "Aztecs in northern New Mexico? How amazing!" But no, it seems it was named erroneously and was occupied by ancestral Puebloan people like so many of these places in the Four Corners area. From what I saw and read, there were two things that I found unusual. First, the original inhabitants of Aztec in the late 1000's were heavily influenced by the civilization at Chaco Canyon - in architecture, ceramics, and ceremonial life. But Chaco's influence waned after 1100 and Aztec became more like Mesa Verde to the north. Like Mesa Verde, Aztec was abandoned by 1300.

The second thing I noticed was that it was massive. The West Ruin is still being excavated and preserved. It had at least 400 rooms and three stories. Although I would assume that the rooms were family units, the experts are saying it was a public building. I'm not convinced, but what do I know? This is a model of how it looked in the 1100's. 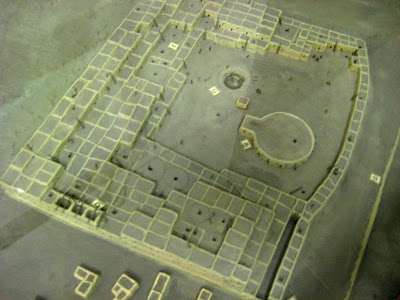 That large round structure is a Giant Kiva, but more on that later.

Here is just a small part of the ruins. 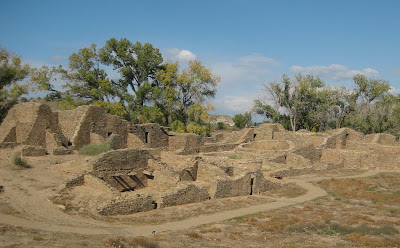 There is an interesting line of green sandstone on part of the wall. I thought it was very decorative, but was told the outer walls were actually covered with mud. So what's the point? 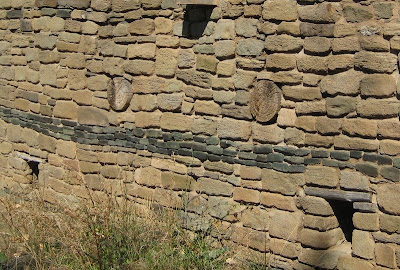 We were allowed to pass through some of the rooms - those doorways were low! You can see some grinding stones in this one. 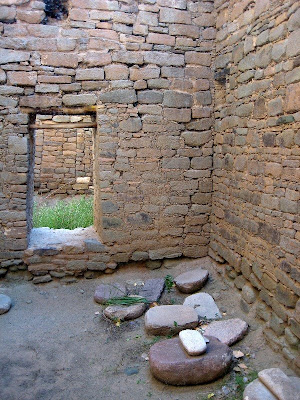 On to the Great Kiva. Kivas are believed to have been used for religious ceremonies and there were many smaller ones in the ruins. This Great Kiva was reconstructed in 1934. 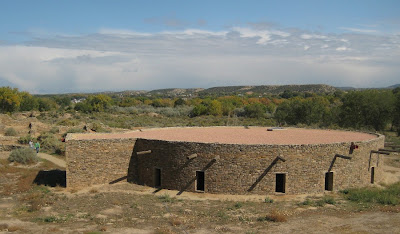 The inside looked like a church. They had found remnants of plaster clinging to the walls during the excavation, so the walls were plastered. I was amazed. 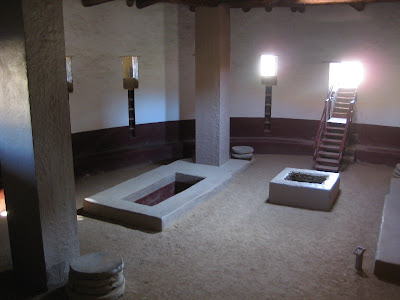 After all that exploration, I was in the mood for a root beer float, so we went to the local A&W. Don't we look cute in our Sunday best? 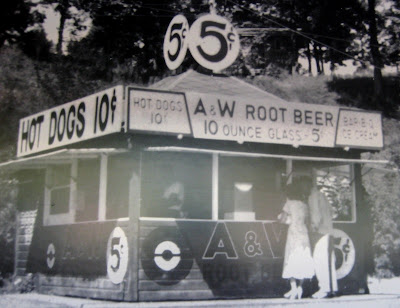 I didn't think you'd believe that, but I thought the picture was cute. Here's Ron ordering for us. I know I've led a sheltered life, but I don't think I've ever used a phone at the table to place an order. 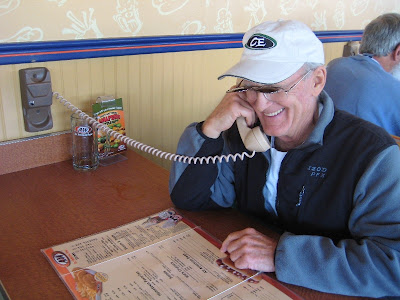