Our final stop in New Mexico was Sugarite Canyon State Park which extends to the border of Colorado.  The park suffered a fire two years ago that burned 80% of the 4000 acre park.  We stayed across from the Lake Alice campground in an overflow lot - perfect for us.

Within the park is the site of the early 1900s coal mining town of Sugarite.  There is a good exhibit in the visitor center and a trail that leads up the hill, past foundations of houses, to the mines.  Included in among lots of interpretive signs is this artistic coal car. 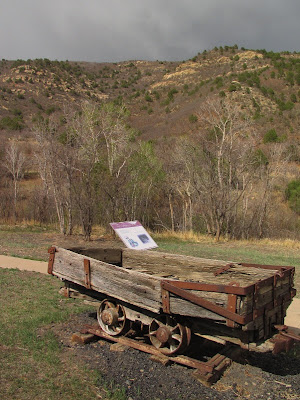 It's a bit of a climb, but you have an overview of the town ruins at the top. 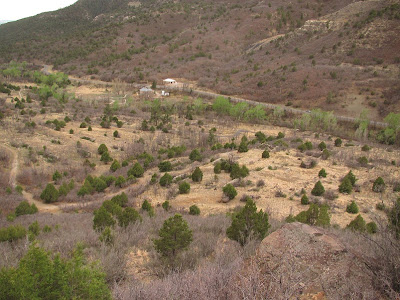 Let me zoom in so you can see some of the town's foundations. 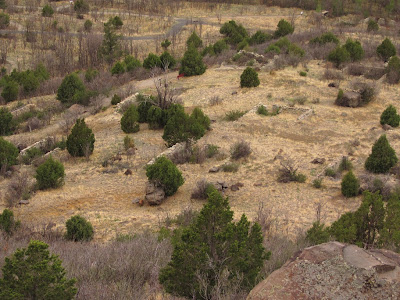 The trail led to the entrance to mine #2 (which didn't really look like much) and the apparatus used to lower the full coal cars down the hill while bringing up the empty ones. 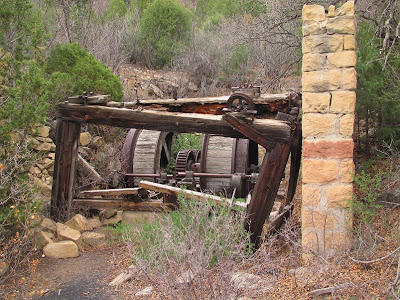 As described in the following. 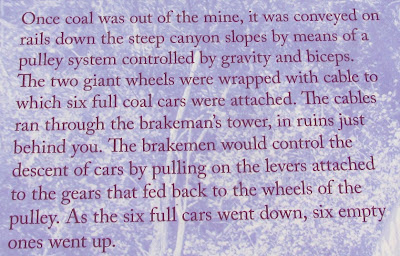 (I particularly liked the 'gravity and biceps' line.)

It seems that everywhere we've been, we've had about five drops of rain.  We've learned to ignore the clouds.  This time we had a few more than five and hustled back down the hill.

While staying at Sugarite, we checked out Capulin Volcano National Monument.  This cinder cone volcano rises 1300 feet above the plain in the middle of the 8000 square mile Raton-Clayton volcanic field in the northeast corner of New Mexico. 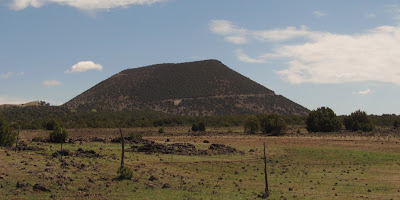 The really cool thing is that you can drive up to the rim of the crater and take a short hike right down to the vent. 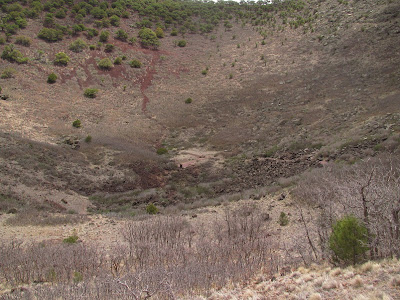 I was picturing an opening into the very bowels of the earth.  In reality, it was filled in with rocks. 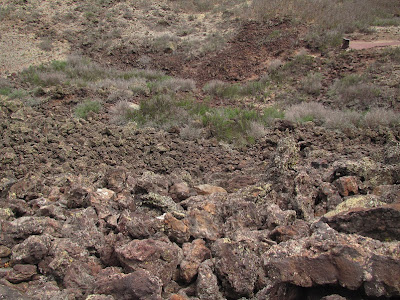 Still pretty cool to be inside a volcano.

You can also hike all along the rim, but we agreed that the view from the upper parking lot was pretty great.  You could see many other volcanoes and lava flows.  You'll have to see it for yourself, because this picture is pretty poor. 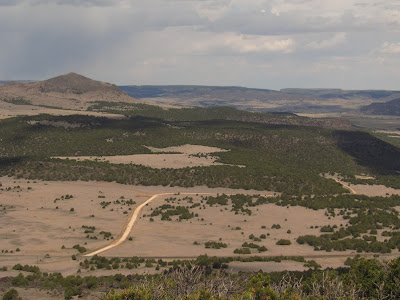 Driving to our next stop, we spotted these really interesting bubbles of lava. 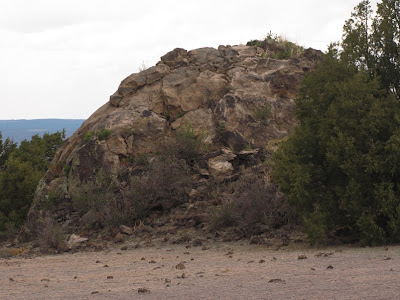 When the crust hardened on a lava flow and the lava continued to flow underneath, these tumuli, or squeeze-ups, formed where the crust broke and lava oozed out.  I don't think I had ever seen them before (and we've seen a lot of volcanoes.)

Also in the area is the town of Folsom which is famous for an important archaeological find - the Folsom Point.  Who besides me has never heard of it? However, as a boy, Ron was aware of and fascinated by it.  In 1908, after the Folsom flood, a cowboy and former slave named George McJunkin found a large number of unusual bones along the Dry Cimarron riverbed.  It wasn't until 1926 that archaeologists excavated the site and discovered that the bones were of extinct massive buffaloes.  But the most important find was a spear point found between a set of ribs.  This was named the Folsom point and, by dating the bones, archaeologists proved that man was in North America by 8000 BC, long before it was previously thought.

The site itself is only open to the public by way of a guided tour on two days each year.  Imagine Ron's disappointment when we discovered it was the day before we were there!  But the museum in Folsom had a lot of information on the find.

Back in Sugarite Canyon, I'll leave you with a shot of Lake Maloya.  The campground host told us it had just been stocked for a huge fishing contest the following weekend.  Unfortunately Ron doesn't have a New Mexico license. 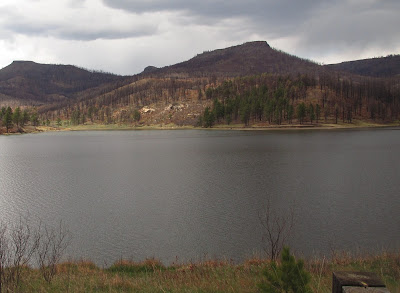