Because we are still here in the heat (it's now about 110 every day), we have witnessed something totally unexpected. While some of the saguaro cactus are still blooming their last white blooms, the early bloomers from late April are into another phase. First I thought some bougainvillea blooms had blown onto the saguaro tips, but upon closer inspection we decided they were seed pods that had burst open!

Ron helped me carry the ladder down the street and even climbed up farther than I would to get this picture. We chased away several birds which were feasting on the seeds. 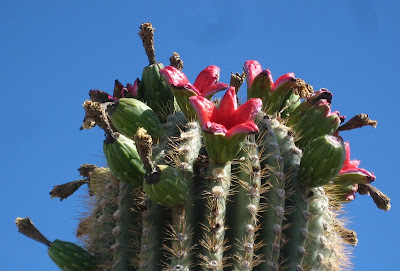 Here's one of the pods that had fallen to the ground. I think I see one little black seed still inside. Isn't that a fantastic color? 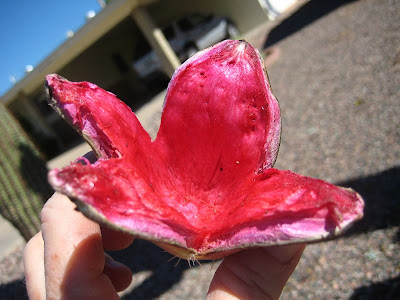 Oh, and good news! Ron will be finished with his vancomycin on Friday! His finger is still red, but looks pretty good. Hopefully the red will fade in time. We plan to stay a couple more weeks to be sure it doesn't swell up again and he actually has an appointment with an infectious disease doctor at the end of June. I'm not sure what he's going to add, but it's just a precaution.

For the non-squeamish, here's a picture of him with his PIC line and IV ball. The ball is pressurized and automatically dispenses the medicine at the proper rate. He can lay it down or even put it in his pocket which is good since it takes 1 1/2 hours. 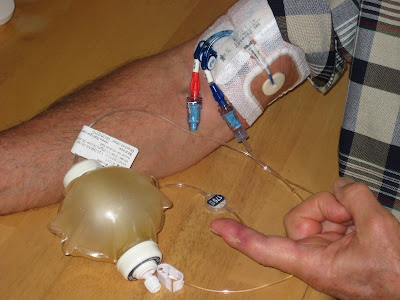 As you can see, he has two ports. We use the blue one for the medicine and the nurse uses the red one to draw blood once a week to check the medicine level in his blood. They had to adjust the amount three times during the five weeks he was on it.
Posted by Barbara and Ron at 10:54 PM