Since we were staying only about 50 miles from Lassen Volcanic National Park, we decided to take a run over there.  We tried to visit the park in June two years ago, but most of the road was closed due to snow. (To see our snow-covered trip from then, click here.)  This time the weather was perfect and the roads were open, although I did miss the snow on the mountains.

We came in the south entrance and stopped at the visitors center.  They had an excellent 20-minute movie introducing the park and various volcano types.  But there's nothing like getting out there and exploring.

We drove higher and higher, past pretty Emerald Lake. 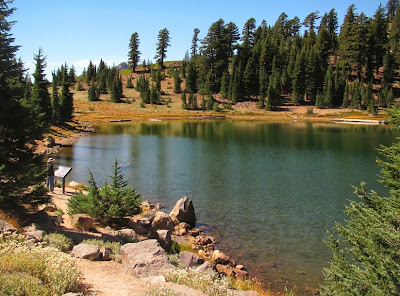 And stopped at the highly recommended Bumpass Hell trailhead (first by Diana, then by the park ranger.) The view from the parking lot included this errant glacier rock. 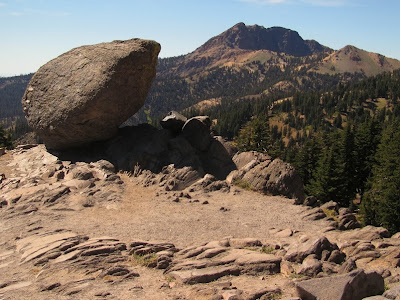 Speaking of views, the Bumpass Hell trail had the best at every turn.  To the north, we saw Lake Helen and Lassen Peak, one of the world's largest plug dome volcanoes. 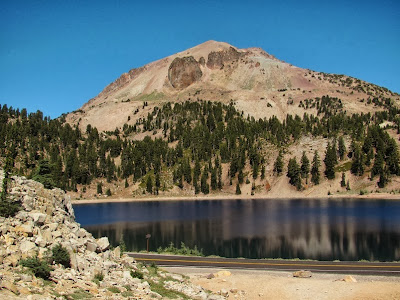 That large outcropping on Lassen Peak has a feature known as Vulcan's Eye.  Can you see it? 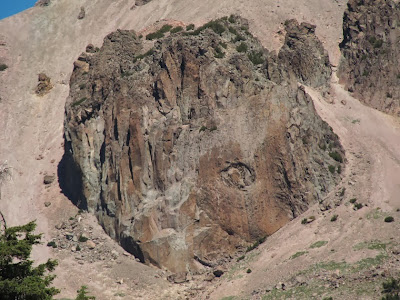 Ron says it looks like a whole face turned down and to the right.  He sees a nose and mouth along with the eye, a full head of hair, and bangs.  I told you he's good.

It's a gradual climb for a mile along a well-used trail. 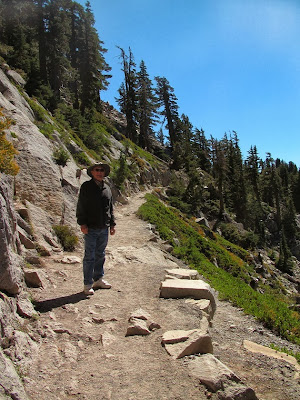 The view to the west includes Brokeoff Mountain, Mt. Diller, and Pilot Pinnacle, remains of a large composite volcano called Mt. Tehama which began to collapse into itself 10,000 years ago. 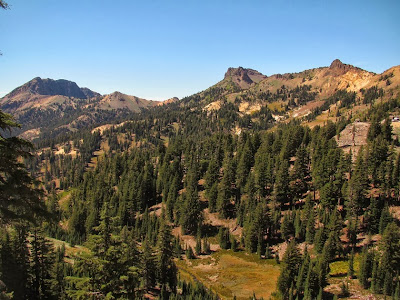 To the south, the rim of the resulting caldera broke and leveled.  Otherwise, I wonder if this would be another Crater Lake. At the end of the mile is the dramatic view of Bumpass Hell to the east.  Yellowstone is not the only place to have sulphur springs and mud pots.  Even from the top of the hill, the sulphur smell was strong. 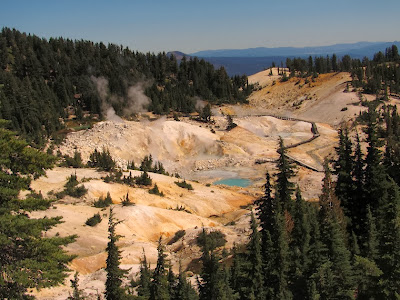 The trail continues down and along the boardwalk visible in the picture, but I have to admit we turned around at this point.  BTW, the area is named after Kendall Vanhook Bumpass, whose leg had to be amputated after it broke though the crust above a boiling mud pot.  Poor guy.

On our return trip, I took another picture of Lassen Peak. 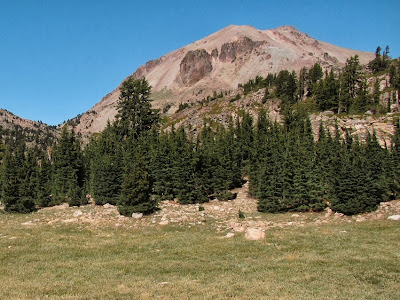 Now this isn't much of a picture, but that meadow in the foreground is full of lupine.  Imagine if they were in bloom like the ones we saw in Wyoming.

On second thought, we don't need imagination when we have computers. 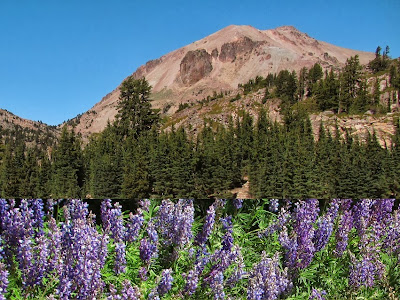 Whoa!  Giant lupine!  Maybe I better just come back when they're in bloom.

We only made a couple more stops on our way through the park, including this one at Hat Lake.  Hmm, I don't see any lake, but it's pretty anyway. 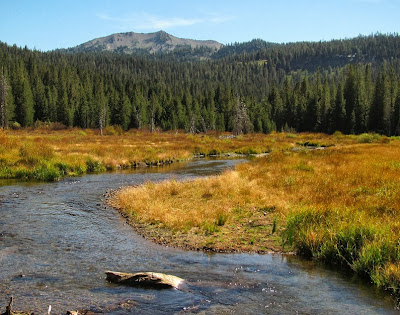 It was about a 150 mile trip by the time we drove through the park and circled back home, but I'm glad we went.  Now we've seen it green and vibrant as well as covered in snow.