We spent several days at a pretty spot right along the Clearwater River in Myrtle.  When I was there years ago, it was just a field and I think it was free.  Since then, it has been changed to an actual RV park with FULL hookups!  My first thought was, “They ruined it!”  But upon reflection and the knowledge that it was only $9 with the Golden Age pass, plus the fact that it was really hot, I decided it wasn’t a bad thing.   I’m sure my fellow WINs who have stayed there in the past will agree that it really looks different. 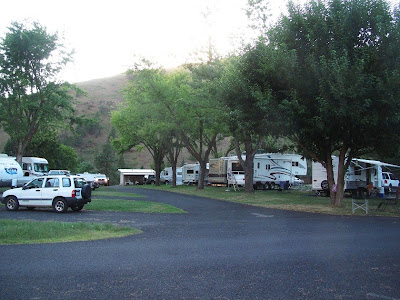 It’s located along US 12 about 15 miles east of Lewiston, ID, and sister town Clarkston, WA.  I bet you can guess where they got their names and sure enough, there’s an interesting Lewis and Clark sculpture along the road into town. 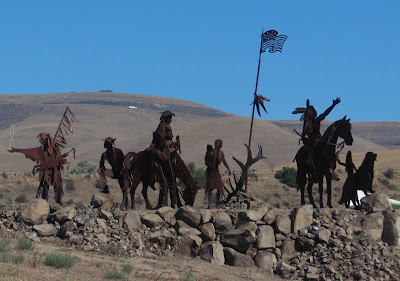 The towns are located where the Clearwater flows into the Snake.  Because of a dam located 38 miles downriver on the Snake, levees had to be built around Lewiston.   The best thing about this situation is the addition of paved bike paths on the levees.  Here’s Ron riding along the Clearwater, which I guess at this point is actually a lake. 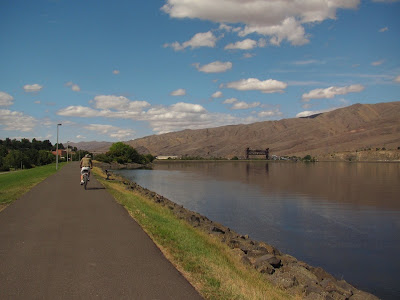 We felt lucky to see the railroad bridge lower and a train cross.  After talking to a young man (probably about 30) who grew up in Lewiston, we discovered how lucky.  He said he had never seen it used. 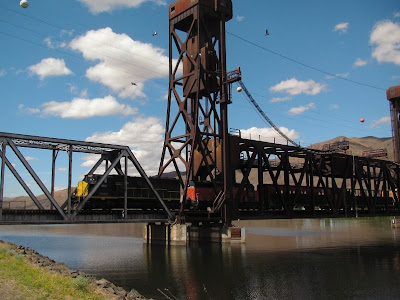 Here’s what it looks like when not in use. 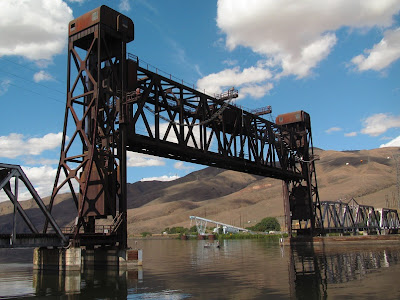 We were surprised to see this sculpture made out of canoes, especially since they all looked brand new!  I guess it’s a wave. 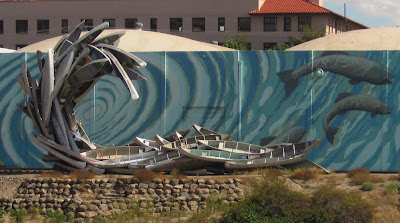 We road 5.5 miles to Hells Gate State Park where we hit the snack bar before turning around. 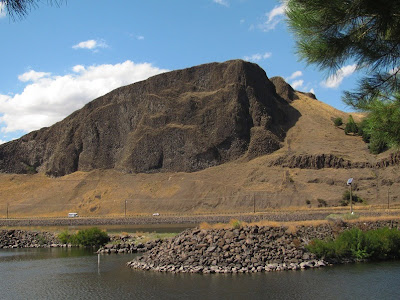 The jet boat tour up the Snake through Hells Canyon leaves from there.  We had done that several years ago.  If you ever consider it, don’t believe them when they tell you that you won’t get wet.  They lie.

I snapped this of Ron on our return trip.  You can see how nice they made the park area on the right side (the Snake is on the left.) 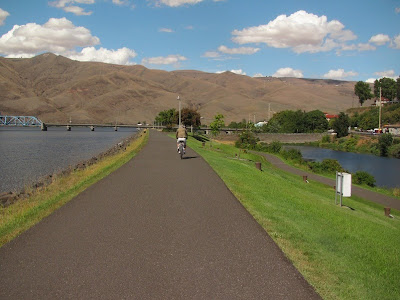 During our stay in Myrtle, we celebrated Ron’s birthday.  Here’s the birthday boy. 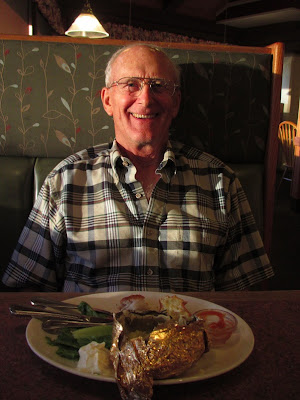 And this just struck me as funny.  We passed this property with junk everywhere. 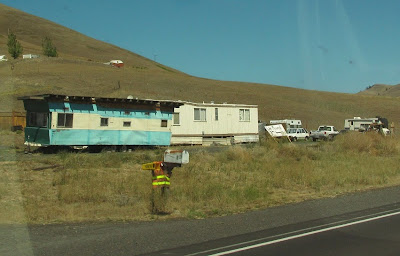 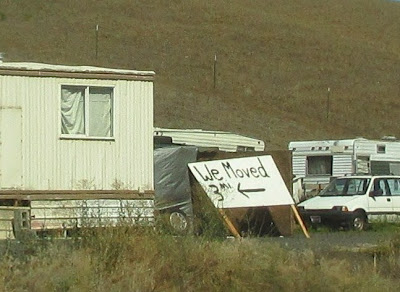 We didn't really do much considering how long we stayed in the area, but I believe I mentioned it was hot.  On our way home from our bike trip, we noticed it was 90.  No wonder I was warm.  But it must have been a dry heat, or I would have been miserable.