Anyway, about a month ago, before it got too hot, I took a nice hike with Diana, Phil, and Joanne. Although most of you already saw it on Diana's blog, I'm going to post it anyway.

We drove east out of Apache Junction on AZ88 to just past Lost Dutchman's SP and followed a dirt road to a very popular trailhead. From there we were able to hike part of the Dutchman's Trail. 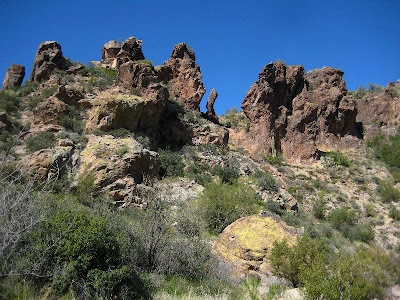 It was a level and very pretty hike among the interesting rock formations. (This is not Diana or Joanne, and certainly not Phil.) 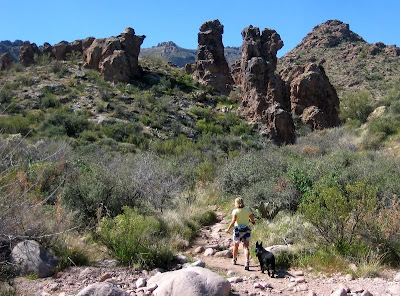 Since I neglected to take a picture of our group, I shamelessly stole this one of Joanne and me from Diana's blog. 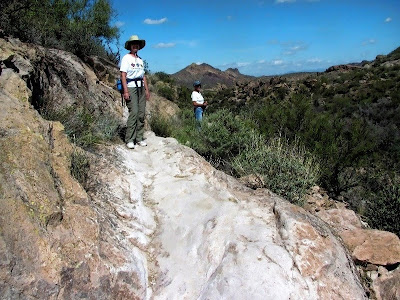 We even had to cross a bit of water - always an exciting sight in the desert. 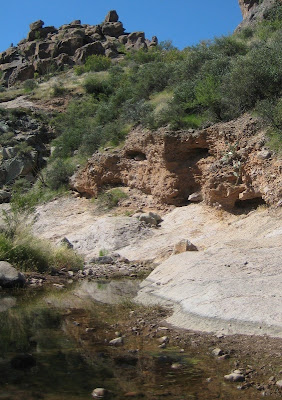 I really liked the color on this bush, although I'm not sure if it's the flowers or the seeds or maybe both. 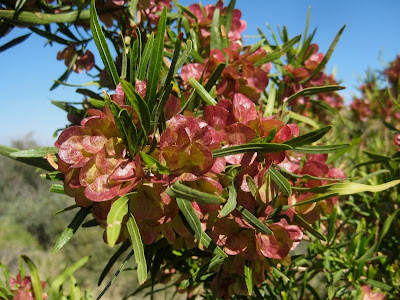 Here's one more shot of the colorful scenery. 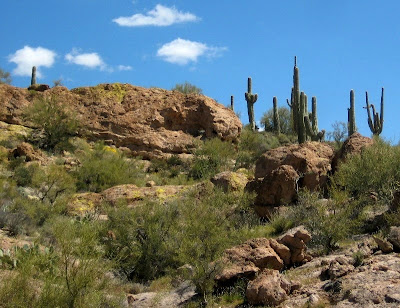 Back at the house (and jumping forward to late April), my tomatoes are still surviving the heat although I don't know if they will ever ripen. 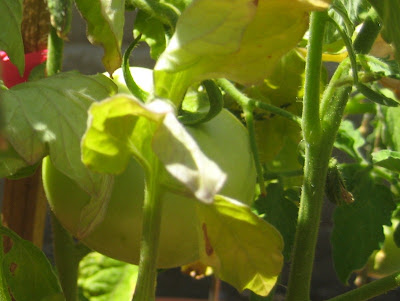 The saguaro down the street is blooming. This one seems to be on an earlier schedule than most since it was in bloom the first week in April. The birds love the little bugs that are attracted to the blooms. 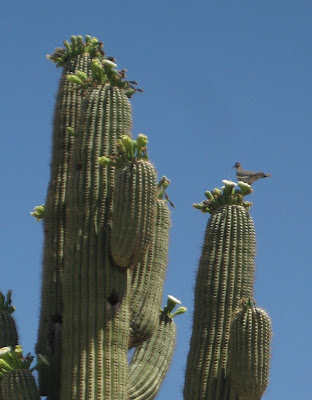 But I was really impressed by this gazania which grew unaided in an empty lot. What tenacity! 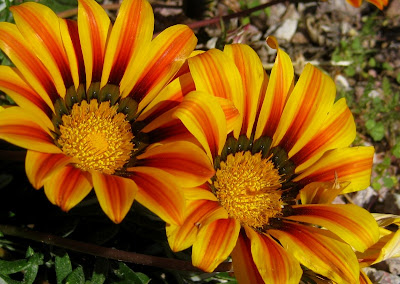 Although I am very neglectful of Facebook (I probably should take myself out of it), I read my Facebook messages tonight. I thought this was so funny, I just had to share. This guy obviously believes in throwing out a lot of bait to see who bites. Here's his message:


Hi,how do you feel today Beautiful woman ?? I am Mark by name , I'm astonished by your unbeaten beauty Pics and you lovely profile on Facebook,You're so beautiful that everyman would want to hold hands with you someday. Looking into your pictures alone, shows me a beautiful world.And i guess I'll a be the luckiest man getting to talk to you. If i were to present your picture in heaven, most of the Angels would hide their faces in shame. i just checked your profile on facebook and i found it very interesting cuss In short words i would say I'm very interested in knowing you better as much.. I like fishing,camping,reading,going to the movies,hanging around with friends,cracking jokes,listening to music,dancing, and also spending time with someone interesting.. I am looking for friends and possibly more that may lead to long term relationship.. I have plans and goals and looking for someone to share them with. I will love to know you more better. You can email me more things about yourself to my personal email address as ( m.hedrick50@yahoo.com ) or add me to your Instant Messenger List as ( m.hedrick50) and i will get back to you with more things about me.. I hope to hear from you soon.

This is a new one on me in the scam department. This one rates a ROTFL - at least I think that means 'rolling on the floor laughing.'
Posted by Barbara and Ron at 8:59 PM 4 comments:

Long, long ago (well, a couple months anyway), two of my stocking-painting friends and I went to a 'High Tea' and fashion show at a neighboring community center. While there, Carol suggested we should hold a 'what not to wear' fashion show. I added the suggestion for a 'Low Tea'. As for when to hold it, we all agreed - April Fools Day! Well, Carol is a born leader and was off and running. She and Ferne helped with a church rummage sale and acquired clothes and accessories that were too ugly to sell. It was really fun going through all the 'treasures' and picking our outfits. We served punch, bag lunches, and cookies on tables decorated with newspaper runners and centerpieces in baked bean cans.

But the fun was dressing up. I think as we age we are more easily entertained. Ferne's red dress had a bull's eye on the back. She tied a dart to it and when she spun around, the audience howled. 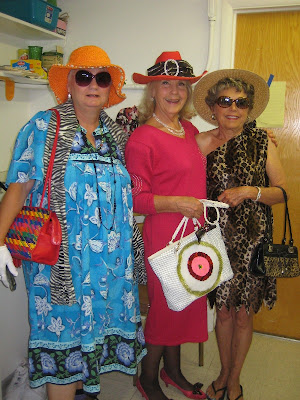 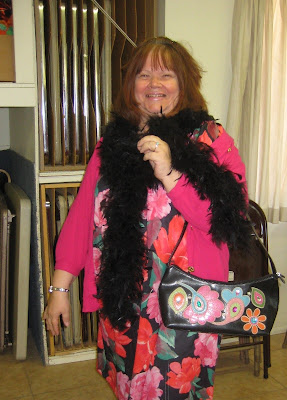 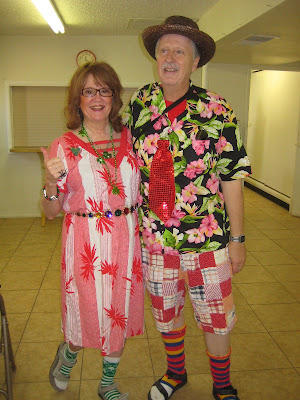 I subscribed to the theory that 'more is more' with my cross between country girl and can-can dancer.

Even some of the audience came dressed in their finery. This is Grace. My favorite part of her outfit was the earring hanging off the nose piece of her glasses. 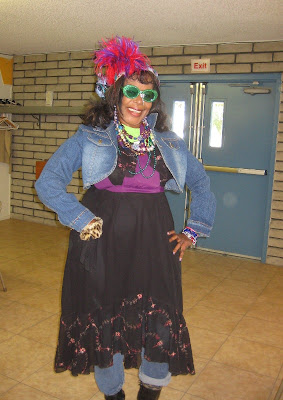