Now that we're back in Mesa, I probably won't be posting as often.  Oh, who am I kidding?  I haven't posted much since the end of October.  Ron has a couple of projects going which I'll be sharing sometime.  But we did get out one day with Carol and John to enjoy the results of all the rain this area received in September.  We took the Lost Goldmine trail - 5 1/2 miles, but only minor elevation changes.

The thing about hiking in the desert is that you can always see where you're going. 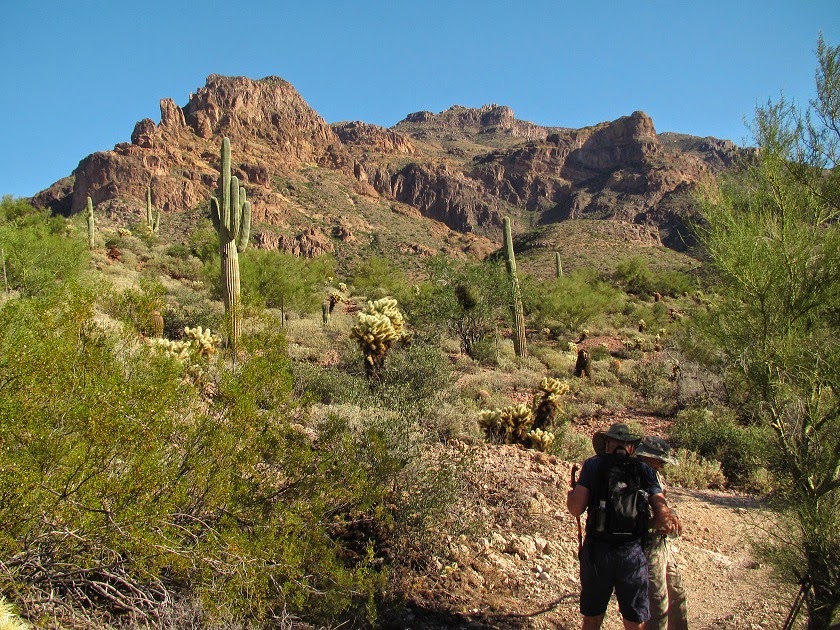 This trail runs along the base of the Superstition Mountains making for nice views the whole way. 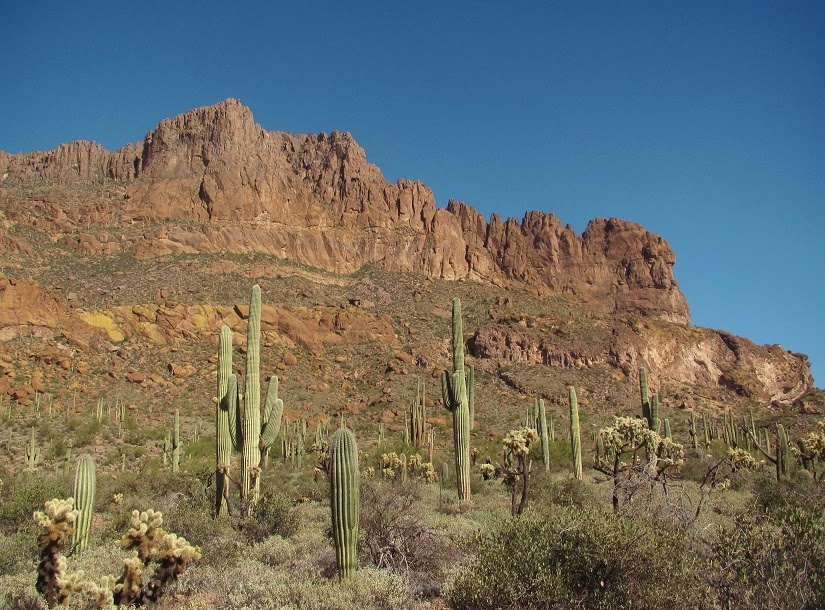 We ran across this saguaro and couldn't decide if it would be considered a 'crested' saguaro or if it's just confused.  (Yes, John and Carol, the word finally came to me.) 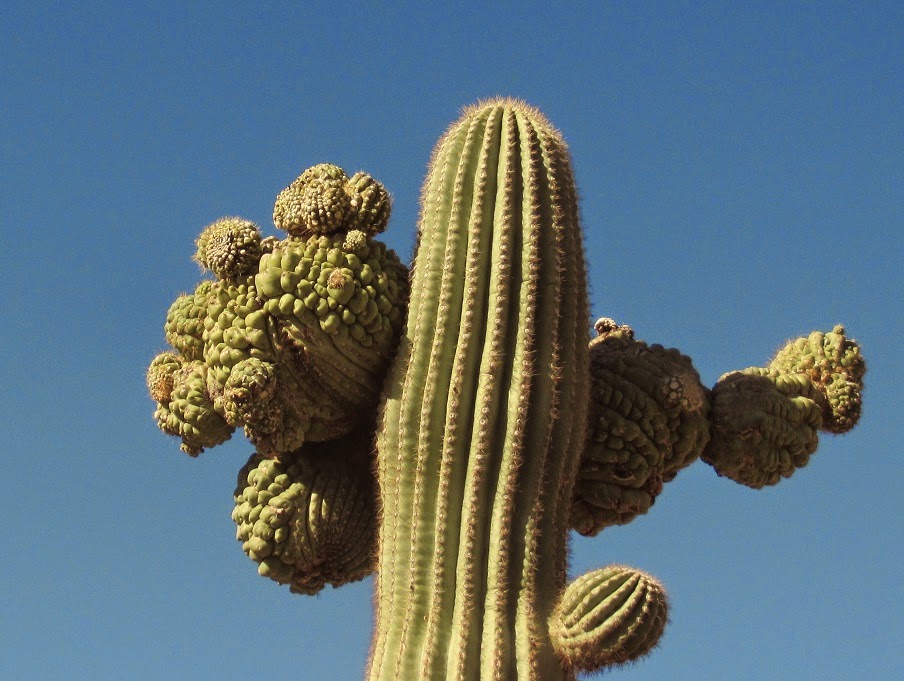 It was a nice hike with fun people. 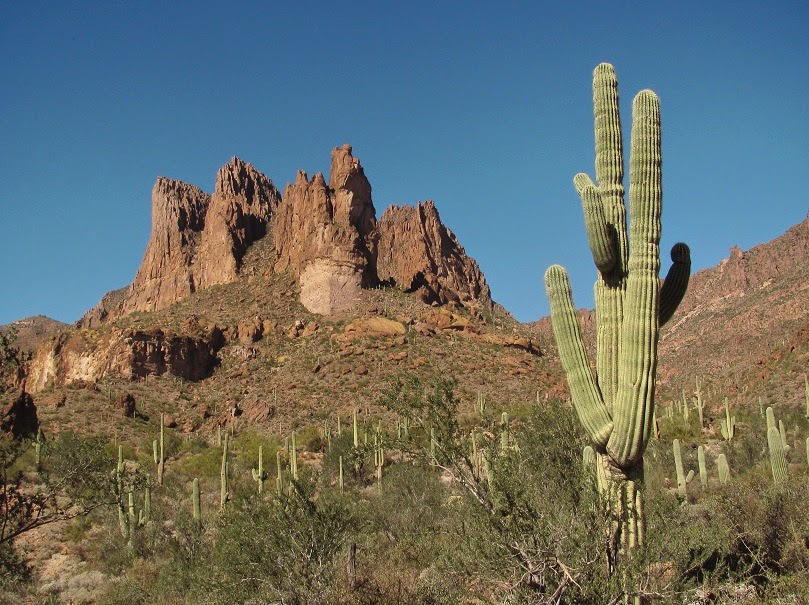 And to top it off, we got to see their new place.  We were their first visitors!

I just have to share this short video of a crazy dove on the house across the street from ours.  He must have stayed there for five minutes, enjoying the ride.

When I was at my father's recently, I went through hundreds of his photographic prints and picked some to bring home with me.  Since Thanksgiving is all about family, I thought I would show off some of them.  I'm pretty excited to have them hanging in our house.

I'm sure all of you RVers recognize Capitol Reef and Park Avenue in Arches. 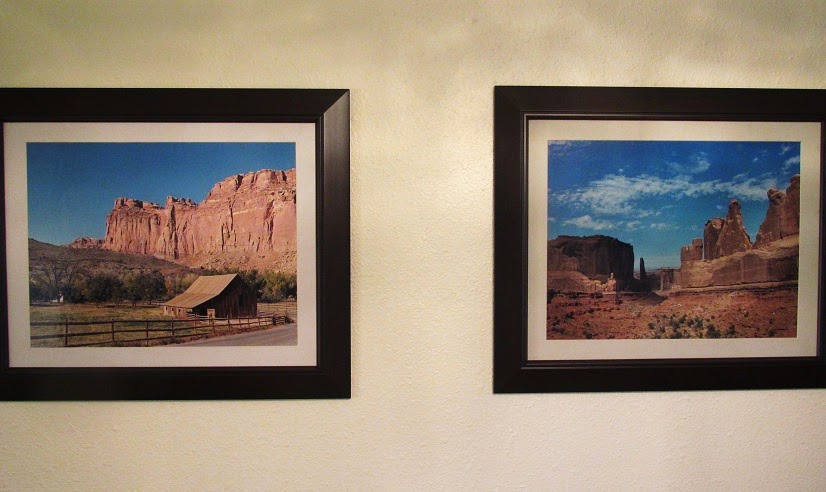 And Delicate Arch in Arches.  If you look closely, you'll see my mother under the arch. 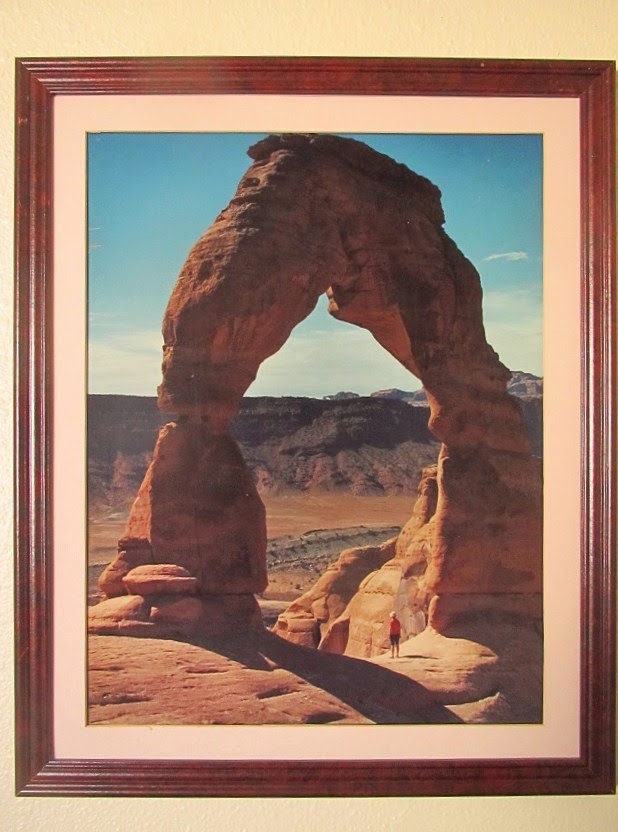 But my father preferred to work in black and white.  I already had this grouping of Double Arch in Arches, Thor's Hammer in Bryce, and Spider Rock in Canyon de Chelly.

I picked all desert landscapes to display in our Arizona house.  If you'd like to see some of his other work, click here for his Flickr page.

Happy Thanksgiving to all!
Posted by Barbara and Ron at 10:41 PM 5 comments:

We arrived back in Mesa for the winter in early November, but we made one final stop on our way. We spent two weeks at our new lot in the Escapee Saguaro Park in Benson, Arizona.  Why would we buy into a park when we have a house in Mesa, you may ask?  Well, when we put our name on the list for a lot at Saguaro, we hadn't yet bought the house.  When our name approached the top of the list, we discussed whether we still wanted it.  The park is a co-op and the cost for a lot is a set amount, plus any improvements that have been done.  Most of the lots have buildings that range from shed size to a maximum of 288 square feet.  This casita on the lot behind us is a nice example. 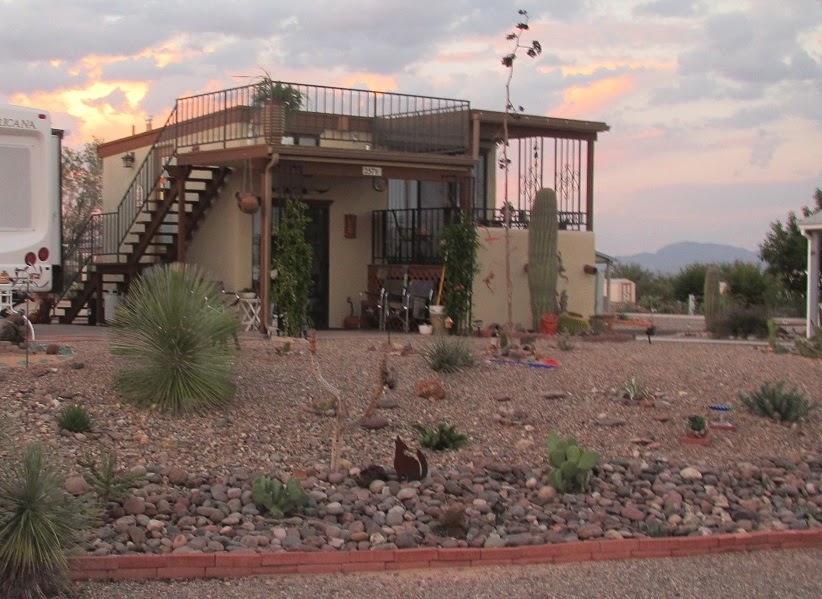 Since one never knows what the future will bring, we decided to buy in.  We can always resell and by putting our lot in the rental pool, our maintenance fee should be covered.  But since we are not planning to spend much time there at this time, we held out for a completely empty lot.  Isn't it gorgeous? 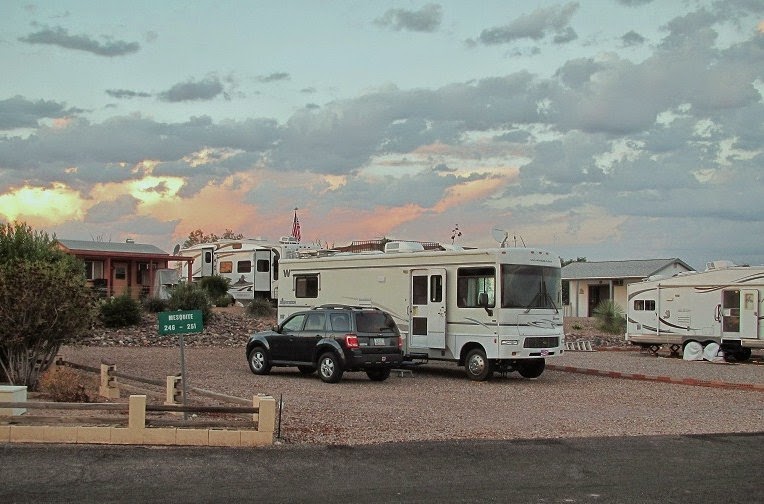 It's between the bocce ball court and another empty lot, so it's very spacious.

From atop the water tower hill, Saguaro Park looks like it's in the middle of nowhere, but I swear downtown Benson is only a couple of miles away. 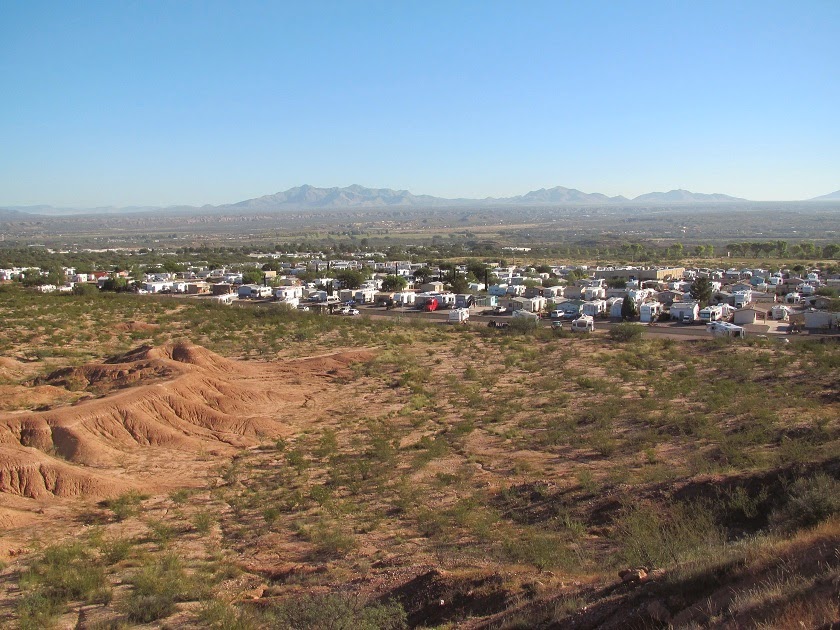 The surrounding terrain is pretty interesting. 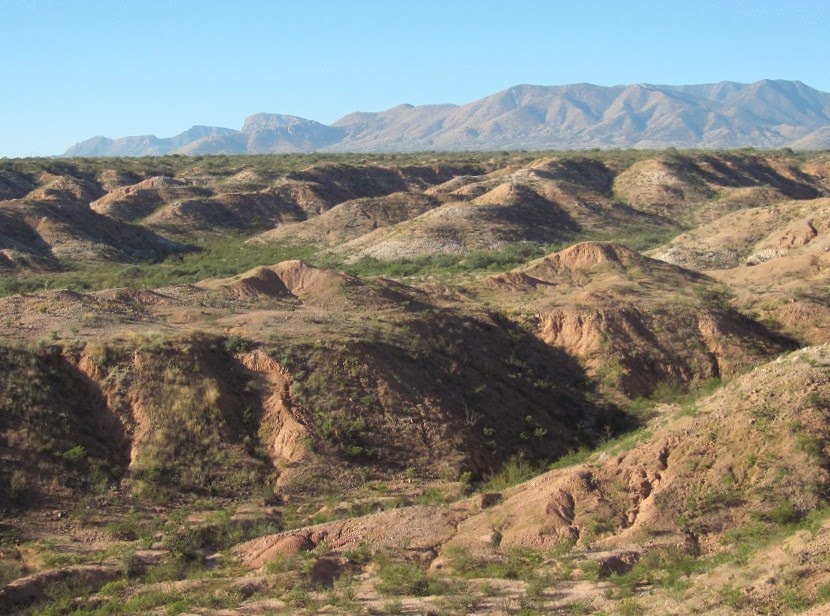 We met lots of really nice people and participated in some of the activities.  We also volunteered with the landscaping committee.  It was quite a workout.

We were happily surprised to run into a friend who happened to stop at the park.  Nancy is a good friend from our WIN singles group.  You can follow her adventures here.

The three of us spent the big bucks to see nearby Kartchner Caverns.  I really resent that they don't allow cameras, so I had to buy postcards.  (Seems like a plot.) 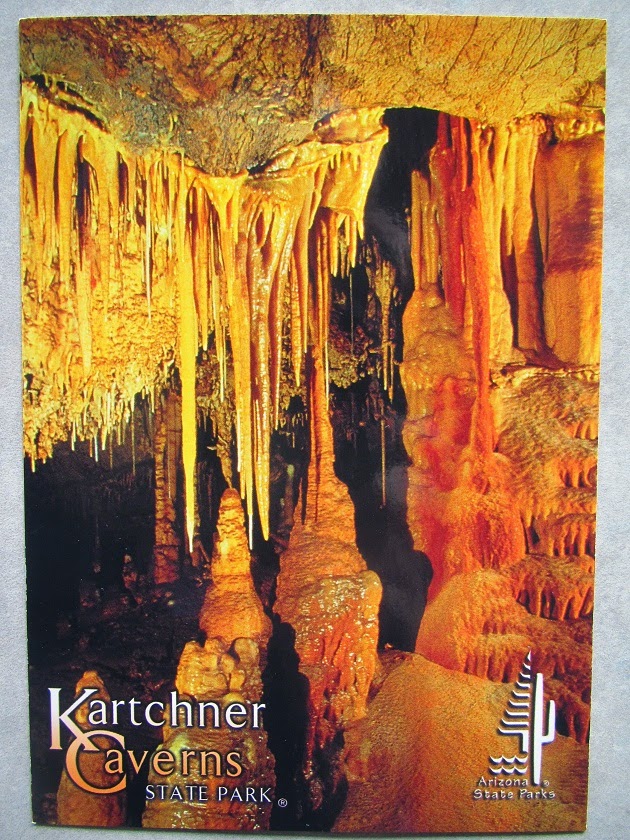 It was pretty cool, although very expensive.  Nancy and I took the Rotunda/Throne Room tour, while Ron, who had already taken that one, picked the Big Room.  Each tour is $23.

The high point of our tour was seeing the 58-foot Kubla Khan column in the Throne room. 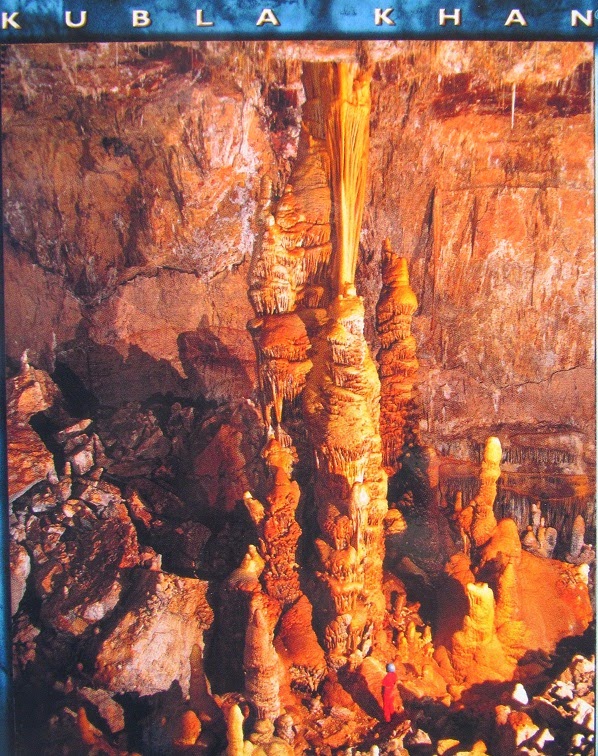 (There's a man in a red shirt standing at the base for size.)

The history of the caverns is pretty interesting.  Two men discovered it in 1974 and they, with the cooperation of the Karchtners, who owned the land, kept it a secret until the site was made a state park in 1988.  In 1999, the first section was opened to the public.  They did a wonderful job of keeping it from being damaged, making it fairly unique.

Speaking of discoveries, Ron found this waffle/donut in Benson.  Would that be a wafnut or a dofle? Either way, it was much better than the cronut (croissant/donut) we had in Wisconsin. 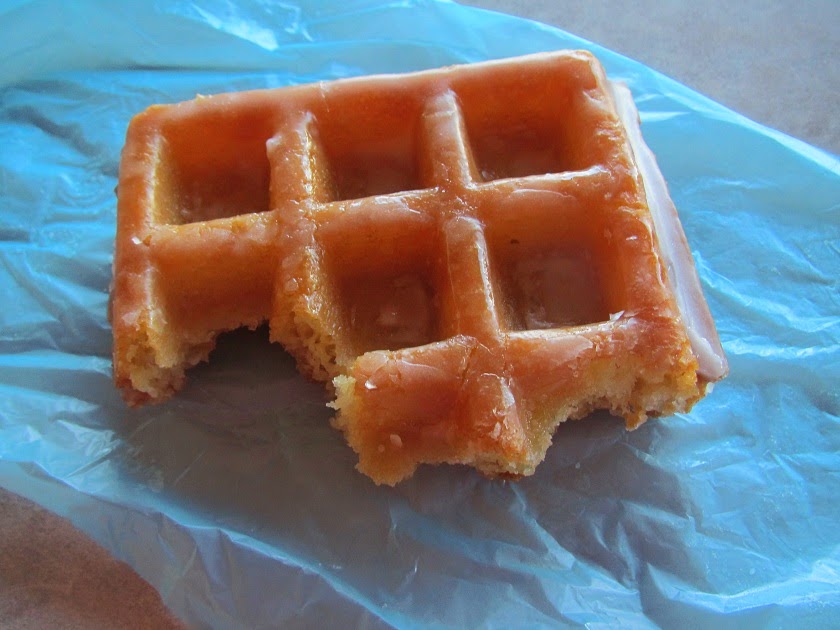 After an enjoyable two weeks we headed home to Mesa.  I couldn't resist snapping a picture of Picacho Peak out the front window.  It looks really scary from this angle.  Ron has climbed it three times and I did twice. The last time was with Carol and John and I posted about it here.  I don't think we'll be doing that again, although I'm glad they didn't close the park like they had planned to do because of budget cuts. 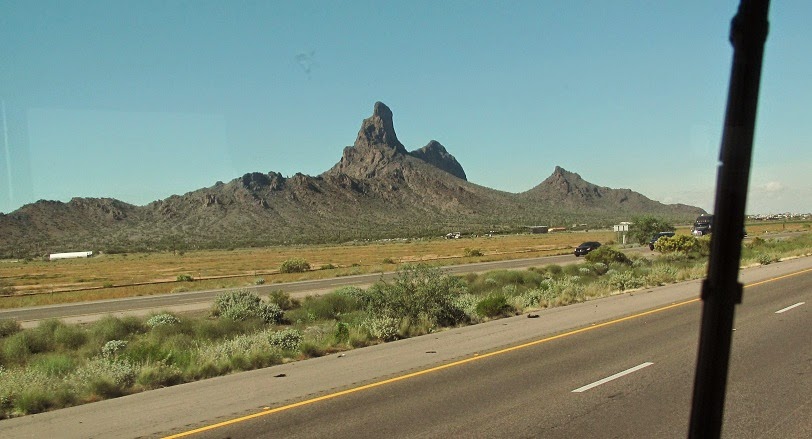 Almost as soon as we arrived home and unloaded the RV (my least favorite job), I flew to PA to visit my father.  He is doing great and we had a nice visit.  We took a day trip to Virginia to visit his newest great-grandaughter, Asha.  Diana's son Mark and his wife Carisa welcomed their little one six months ago.  She is such a good baby.  In the 3 1/2 hours we were there, she was awake the whole time and I don't think she cried once.  She is so interested in everything, but was especially enthralled by her great-grandfather.

Here's a picture I snapped with my phone. 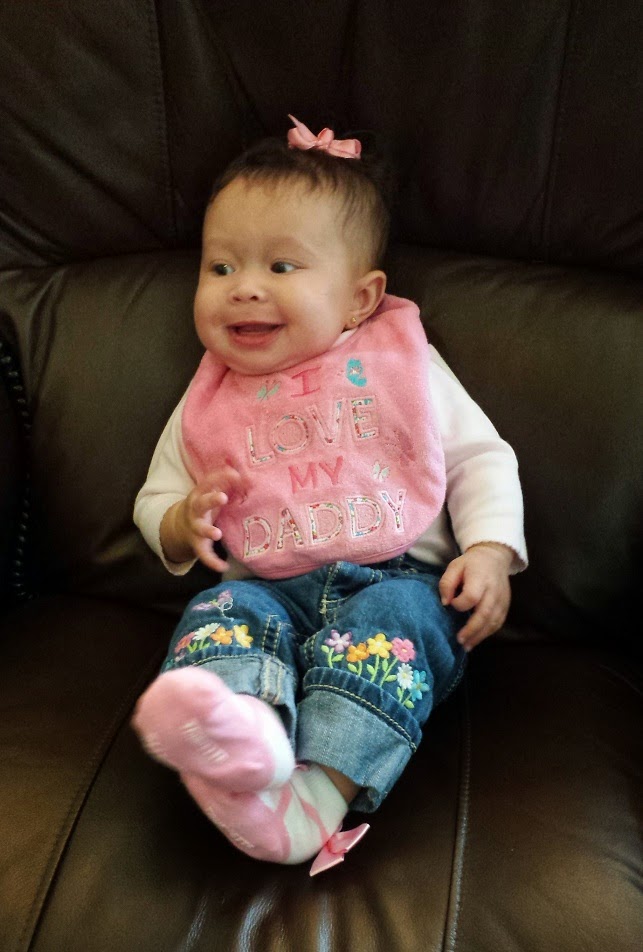 But I really love this one that Mark took of my father, me and Asha.  She seems to be wondering what the heck is going on. 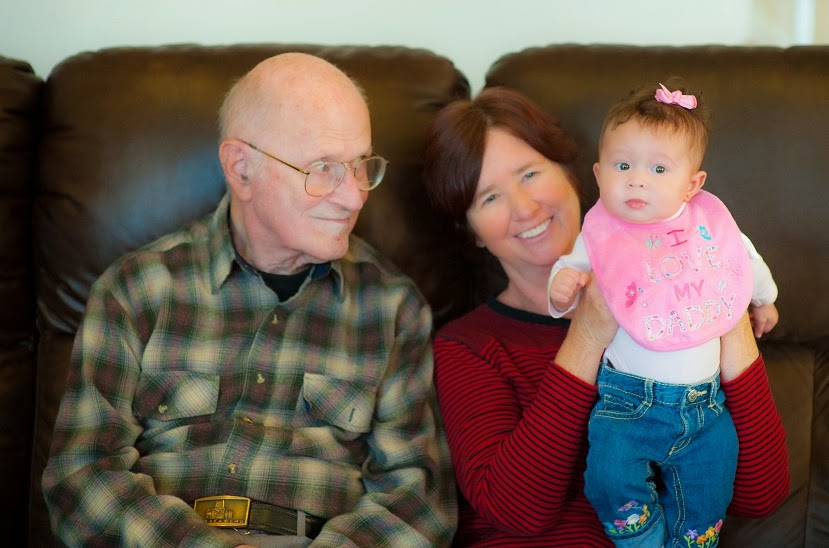