While in City of Rocks SP, we took a day trip to Silver City.  We had been there last year for a few nights and thought it was worth a return visit.  While walking around the cute downtown area, we came across this sign and wondered just what kind of business it could be.

Well, as we pressed our noses to the door like tourists, Patrick, the showroom manager waved us in from the other side.  He then proceeded to give us a tour of this unique hand-made tile business.  It was fascinating!

Many of the tiles are cut with cookie-cutter type tools.  This day they were molding tiles with a protruding design - one at a time. 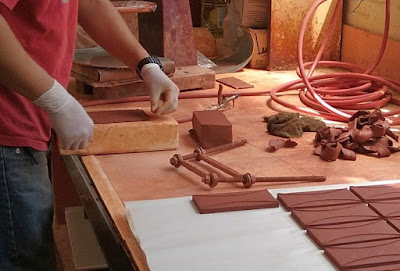 After drying on racks, the soft clay pieces then go into a kiln to harden into bisque. 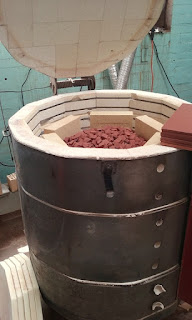 Next is the glazing process which can be multiple applications.  These tiles were receiving four coats. 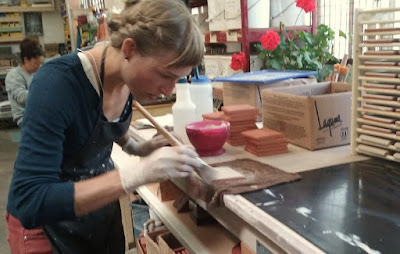 Next, the edges are evened and cleaned of any drips. 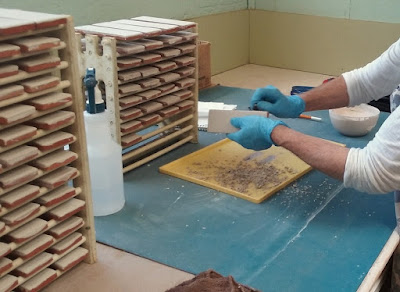 Then they are fired again to make the beautiful tiles displayed in the showroom and sent to customers. 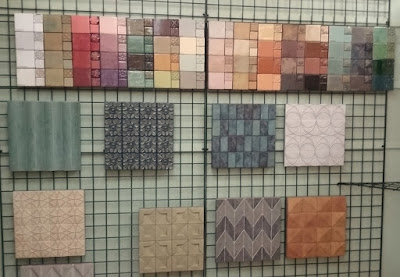 It was an amazing experience to see all the individual attention and work that goes into each tile.  They obviously take great pride in their product and it shows.  If you ever get to Silver City, look them up and ask Patrick for the grand tour. 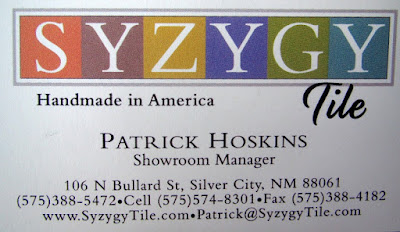 This year we decided to take advantage of New Mexico's annual state park pass.  At $225, it's a chunk of money, but it covers free camping in all of their state parks for a year.  For an extra $4 a night you can upgrade to hook-ups, but dry camping suits us just fine.

We began our adventure with the interesting City of Rocks State Park.  Being a girl who loves rocks, this is just my cup of tea. 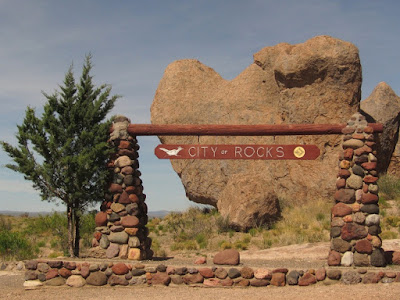 After changing our minds a couple of times, we settled in campsite 14 which is named Gemini.  Although it was probably named for the giant twin rocks, there are also two rocks that have settled between the twins. 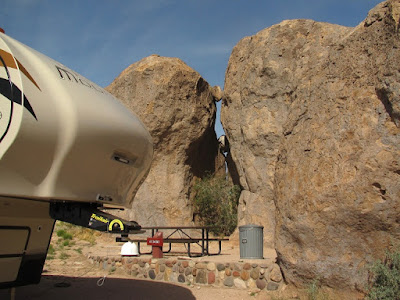 I have to admire the pretty blooms on the bird-of-paradise bushes in the area, although the landscape committee at Saguaro Park hates them because they sprout everywhere. 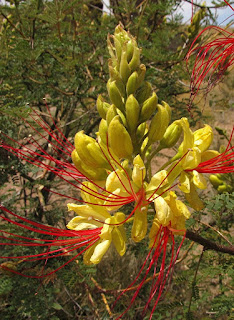 We've had quite a bit of strong wind during our stay, but I understand it's the same in the whole southwest.  We did manage to get in a couple of morning hikes.  One day we walked around the two-mile loop and checked out all the other campsites, which is a hobby of ours.  But today we hiked in among the rocks.  So cool. 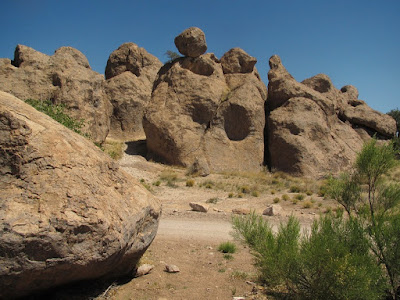 This was one of many that looked rather unstable.  I guess they don't have earthquakes around here. 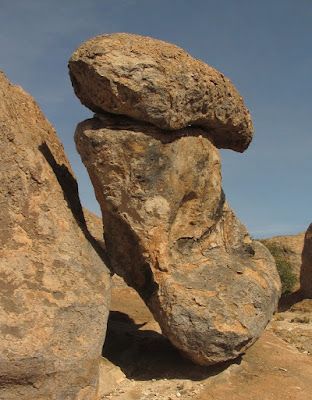 It wasn't long before Ron was seeing figures in the rocks.  He must have more imagination than I do, but even I agreed with his opinion on this Yoda rock. 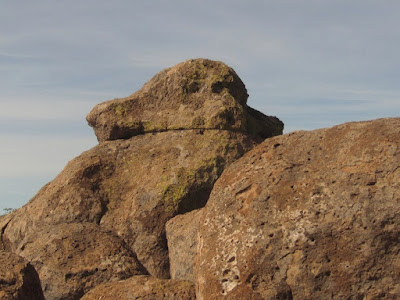 I'm glad that the park officials allow visitors to wander instead of staying on a trail.  I think it enhances the experience. 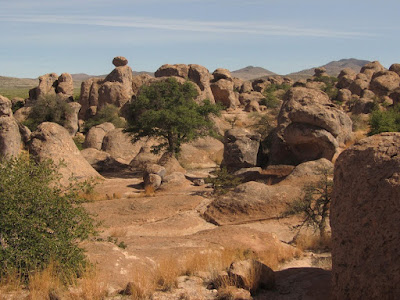 From atop a nearby hill, you can really appreciate the unusual landscape. 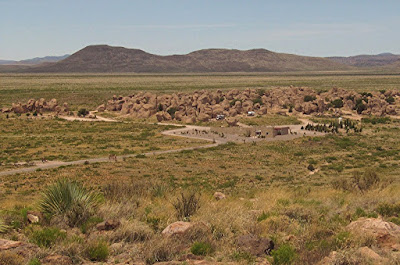 This was certainly a great start to our NM state parks adventure.

And We're Off Again

During our winter stay in Mesa, AZ,, I take a break from writing our blog.  We had some visitors, took some hikes, and generally did our normal wintry things. But the most time-consuming and expensive thing we did was to trade in our 30' Class A motorhome for a fifth wheel.  Of course this involved also buying a truck.  Here's our baby when we picked it up at the dealership.  It's a Northwood Fox Mountain 235RLS.

As soon as we got it home, Ron went to work installing solar panels and controller, as well as an inverter/charger with remote controller. 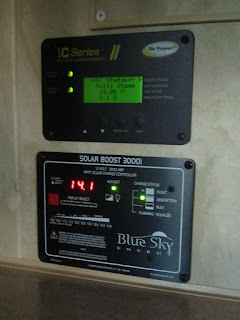 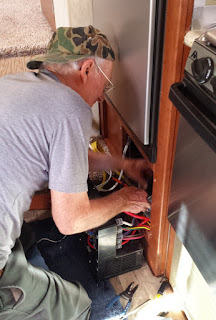 And the work didn't stop there.  He moved all the wiring to install four AGM batteries and reinforced the bin floor for a generator. 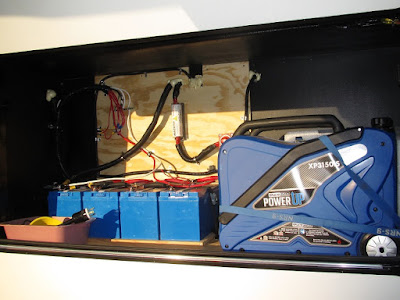 Except for the batteries, we ordered all this online.  Imagine the poor UPS driver who had to deliver the generator!

He also installed towel racks and coat hooks, and converted the pantry into a closet by removing shelves and adding a clothes rod. 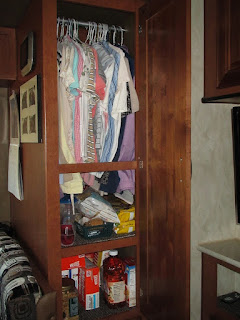 On April 12th, we left Mesa and traveled 150 miles to our new lot in the Escapees Saguaro Co-op in Benson, Arizona.  This is actually our second lot.  The first was completely empty and we upgraded to one that is almost empty.  This one has some concrete and pavers, but the reason for the move was the orientation of the lot.  The first lot faced southeast and the afternoon sun hitting the side of the RV was a killer.  This lot faces west which works out much better for a fifth wheel with no windows in the front.

The first thing we did was weed, just like we do in Mesa. 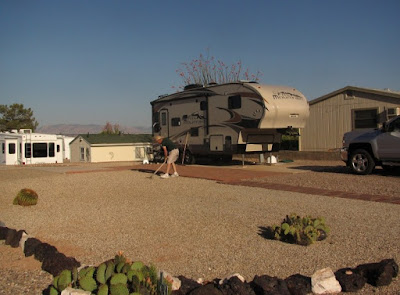 But for poor Ron, the work continued with hanging things (pictures, clocks, more hooks) and fixing up the imperfectly positioned pavers and edging on the lot.  He added a shelf in a large cabinet next to the door. 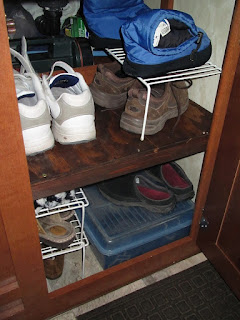 This involved staining the shelf and supports, which I could understand, but I think only he would stain his hat rack which was a slightly lighter wood.  After all, it will be covered by hats! 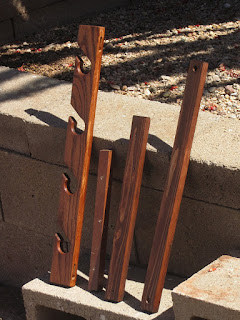 Sometimes he did relax a bit.  Notice how he placed the things on the wall so he can lean back in his favorite resting position. 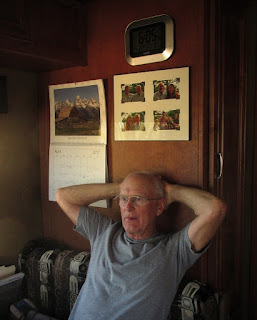 We've been here for 10 days and are leaving tomorrow.  Being the procrastinator that I am, I waited until this evening to take pictures.  The lots here are leased and any improvements to the site are added to the cost of the lease.  The maximum building size, which is elegantly referred to as a casita, is 288 square feet.  They range from shed size . . . 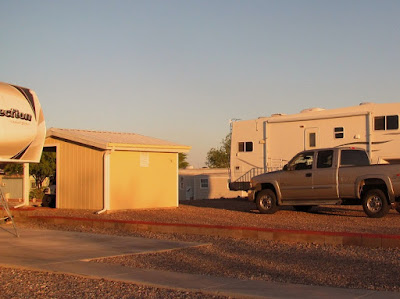 To very substantial, with park trailers instead of RVs. 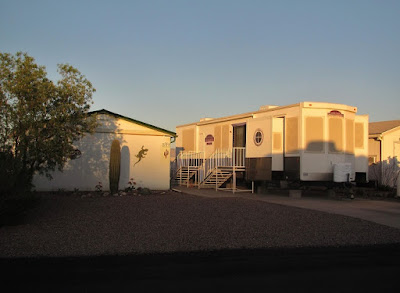 Note - the park trailers are not added to the lease and must be removed or sold independently when a lease is terminated.

This is one of my favorite casitas in the park. 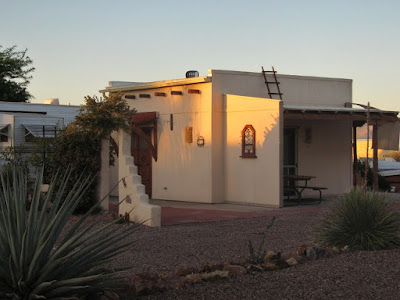 As members of a co-op, we all have to pitch in to make the park a success.  Because we are rarely here, we work with the landscaping committee.  Ron and I worked on the area around the clubhouse this visit. 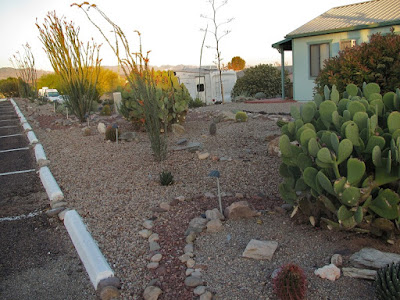 And finally, here's the view of the Dragoon Mountains out the rear window of our fifth wheel. 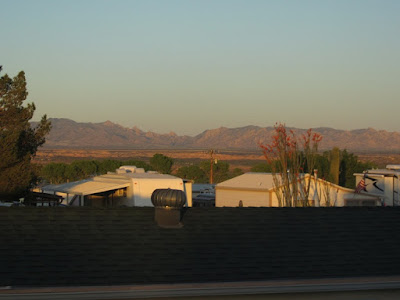 Tomorrow we're leaving here for New Mexico where we plan on hitting many of their state parks.  Hopefully, I'll soon catch up on reading other blogs.
Posted by Barbara and Ron at 10:54 PM 6 comments: