I Must be Nuts

Or just bored.  Recently, I decided that our perfectly good dining room table had to go.  We had bought it off Craigslist during the frenzy of furnishing our empty house in '09.  Although I still liked the table, I realized it was the only thing in the whole house that was light wood.  It just seemed out of place.

So I listed it on Craigslist and within a day it sold for $25 less than we had paid for it. 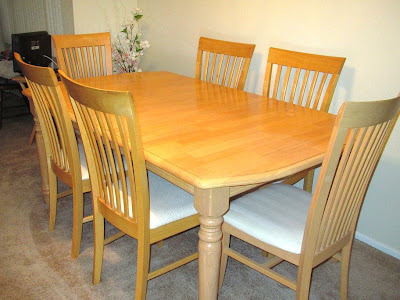 I wasn't in a real hurry to replace it until we decided it was time to buy a car and trade in the truck.   Ooops. I checked Craigslist and didn't see anything I liked so we decided to hit the consignment stores.  At the first one, we saw a nice Ethan Allen set, but the table had a couple of horrible scratches.  Then we bought the car and the pressure was on.  We told them we couldn't pick up the car for 24 hours and looked in three other places.  Nothing.

Since we were down to the wire, we bought the set with the scratches figuring I could just leave a tablecloth on it and I really did like it other than that problem.  Also it was such a bargain that if I decided I hated it, I could always resell it on Craigslist. So we loaded it in the truck, carted it home, and promptly traded in the truck.

Well, it was nothing short of a Christmas miracle.  I hit it with a little scratch cover and the scratches just disappeared! 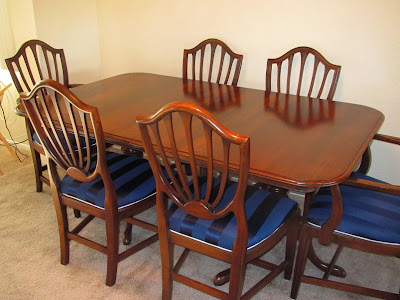 If they had just done that in the consignment store, they could have sold it for a lot more money.  I think I'll keep this one.

We're spending Christmas with our WIN friends in Yuma, AZ.  About 60 of us are gathered in the desert, making merry.  This evening, we had a Christmas celebration with finger foods and Christmas carols. 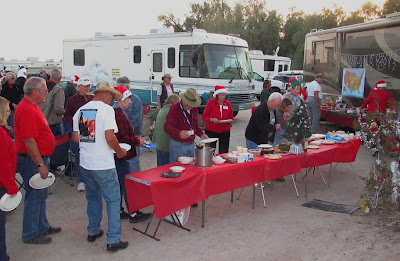 The WINs are always ready to eat. 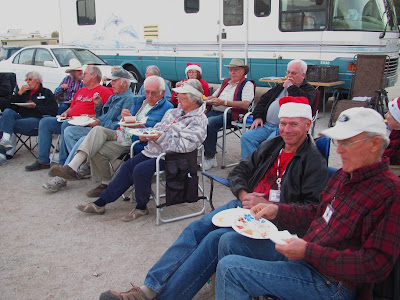 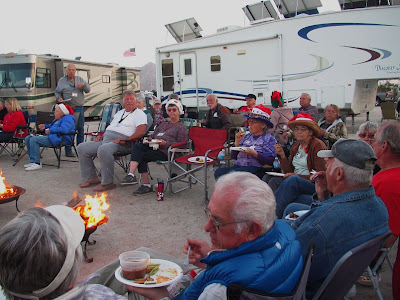 Here are the festive hat ladies. 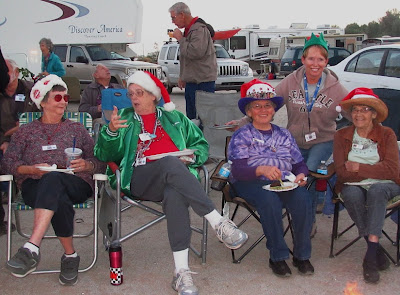 A creosote bush was drafted as a Christmas tree. 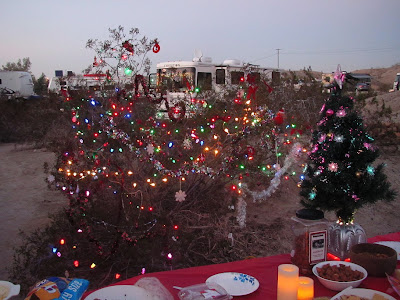 Our Bagpipe Bob played a few numbers for us. 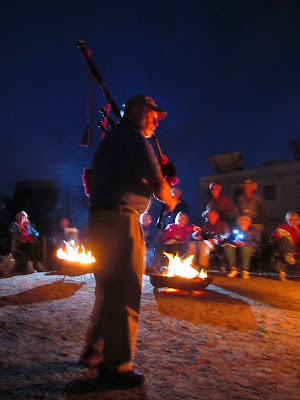 The sound of a bagpipe is one of my very favorite things, but I have to wonder what the non-WINs in the area are thinking.  "Am I hearing things - are those bagpipes?"

Have you ever heard 'Oh, Come all ye Faithful' on the bagpipes?  It's just beautiful.


And we finished out the evening with carols around the multiple fires. 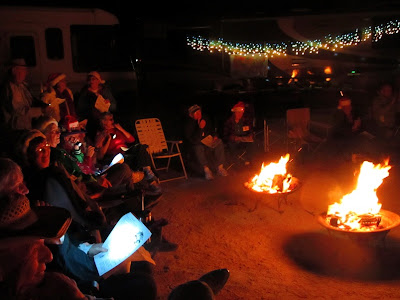 Meanwhile, I don't think our little Harper was thrilled with Santa. 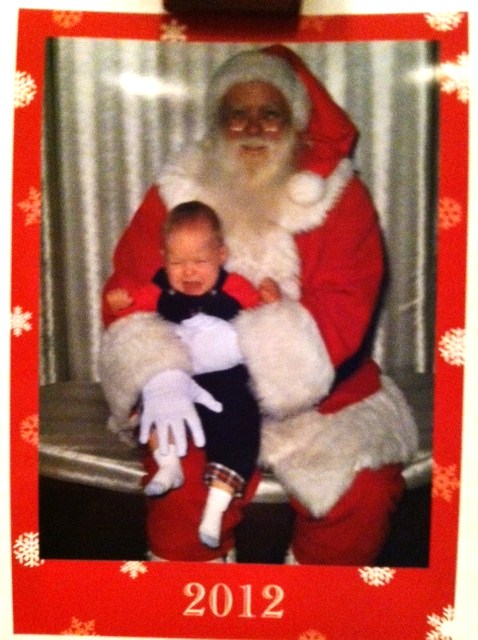 Once again, Ron has invested a lot of time and effort into a project that only he would think up.  If I heard it once, I heard it a hundred times - he hated the bathroom sink in the RV.  "It's too small," was his oft repeated complaint.  So here's what the clever guy did.

First a picture of the 'before' sink.  You can probably agree that it was a bit small. 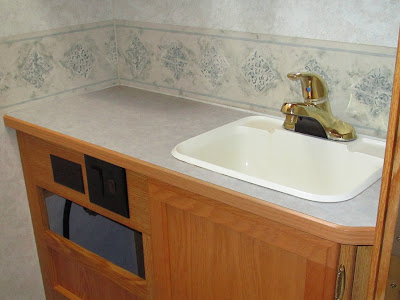 To be accurate, this is not exactly 'before'.  He had already moved those switches and the drawer was out.  And, okay, he put the sink back in for the picture.

He really liked the sink in Diana's rig and we bought one just like it at an RV store in Salt Lake City.  The problem is that a larger sink will not fit into that counter.  Here's Diana's sink and you can see how cleverly they built the cabinet to fit it.  You might have to put on your 3-D glasses, but there's a piece of wood that curves out of the cabinet to cover the bowl of the sink. 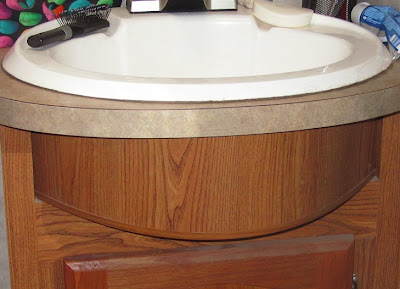 First Ron made a new counter top out of pressed board and took it to a counter man to cover with Formica. 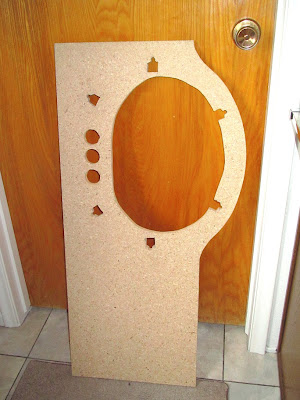 But the big problem was how to bend a piece of plywood.  He tried cutting notches and soaking it to form it into the correct shape. 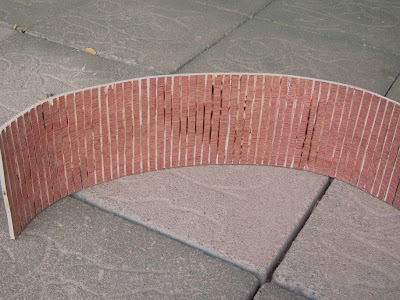 But no matter how carefully he worked, it developed cracks. 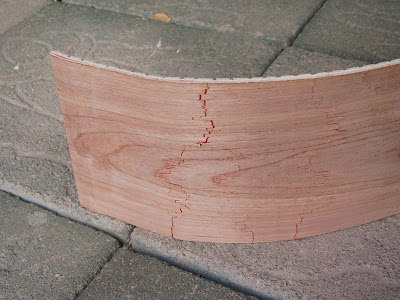 After attempting this method a couple of times, he got very creative and cut pieces of wood which he then glued together, like this.  (This is the inside.) 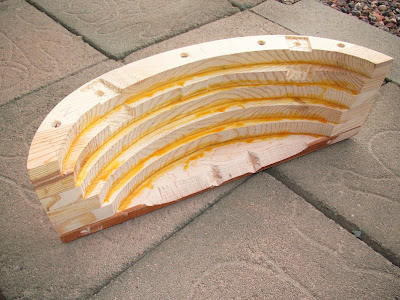 Which he sanded on the outside to a nice smooth surface. 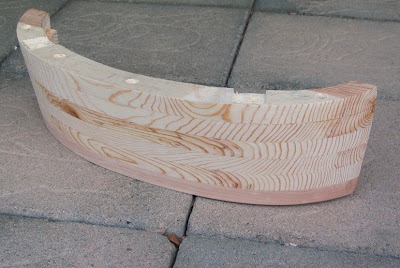 Then he stained it and put it all together to create a thing of beauty. 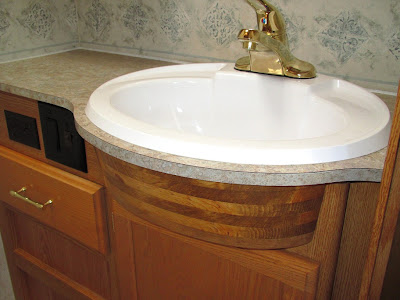 End of an Era

For a couple of years, we have been talking about buying a new towed vehicle for the RV. Our problem was that we couldn't decide what kind of vehicle to buy.  Do we buy a 4-wheel drive or one that is more economical?  Our little Saturn that has been towed behind Ron's rig for over seven years was having some problems, but giving up that 38mpg was difficult.  I kept insisting (and I guess I talked Ron into believing it) that we don't really need a 4WD, just something that has a higher clearance than the Saturn.  We decided on a front-wheel drive Ford Escape, researched it on cars.com and kbb.com, and bought the first one we looked at.

But it was the end of an era for me, because we traded in my beloved truck.  In 2001, I quit work, sold my house, bought the truck and the perfect fifth-wheel, and began the adventure of a lifetime. 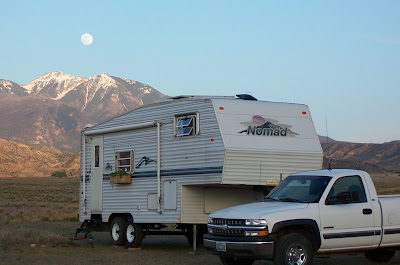 Although I sold the fifth-wheel in 2006, I still had my truck.  It came in very handy while furnishing the house we bought in 2009 and I told everyone that I had the truck as a backup if Ron should throw me out.  It made me sad to see it go. 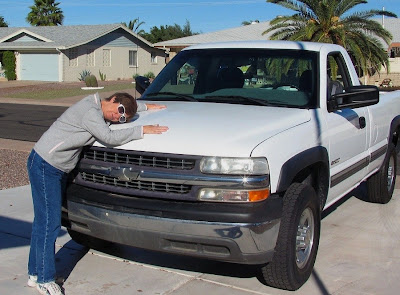 But just look what I got in return! 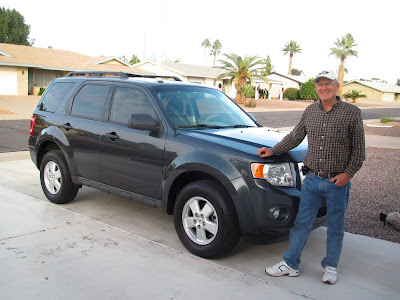 Now would that be Pennsylvania or Pa (as in Father)?  Well, both, actually.  Recently I flew East to spend a week with my father.  It rained, or at least drizzled, every day I was there, but at least it wasn't too cold.  I always have a nice time when I visit and I hope he does too.  We made the rounds catching up with my relatives and my father's wonderful neighbors.

Between the raindrops, I helped him change the oil in his car and cut and split some wood.  And this is a man who complains that he can't do anything any more.  At nearly 92, I think he's amazing.  Before you picture Paul Bunyan, he did use a chain saw to cut and a mechanical splitter to split the wood, but that image of him sliding under the car to remove the oil pan plug is accurate.  I functioned as the gofer.

Everything was perfect until I was on my way  home.  My flight out of Harrisburg to Atlanta was delayed and I would have missed my flight home out of Atlanta.  That was when the fun began.  I had to fly to Detroit, then Minneapolis, then home to Phoenix.  Somehow I was assigned a seat in first class for the second flight.  I kept waiting for somebody to kick me back to coach or worse.  I swear the rest of the first class passengers were looking at me oddly.  My seatmate was very sweet though and even pointed out the choicest snacks.

Somehow I never took any pictures. (And I especially wish I had gotten a shot of my father's feet sticking out from under the car.)
Posted by Barbara and Ron at 8:47 PM 7 comments: 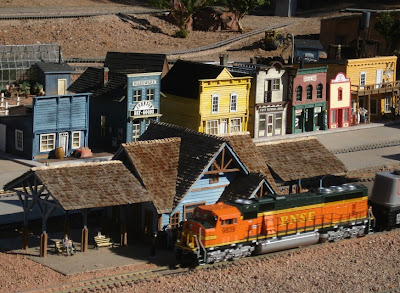 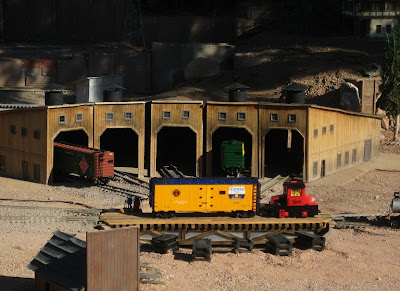 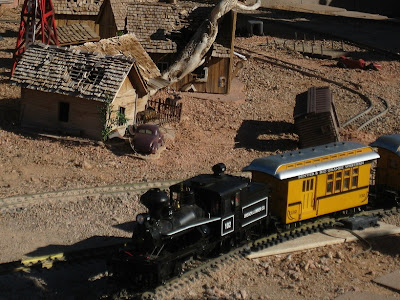 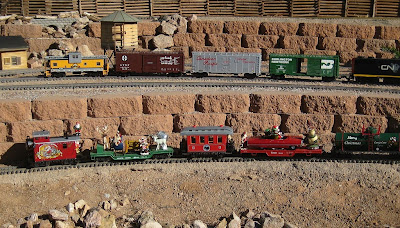 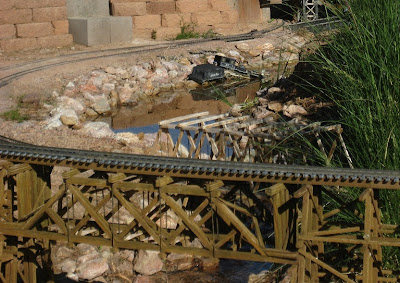 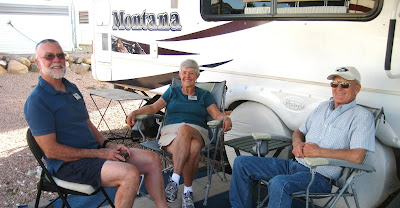