After my flights across the country, we hurried to attend our friend John’s 90th birthday party.  He and several other RVing friends own large lots between Show Low and Concho, Arizona.  At 7000 feet, the weather was perfect in mid-September and we happily settled in on Roy’s lot, who unfortunately wasn’t there. 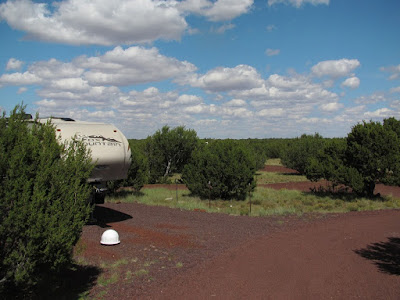 We had requested that John put us away from the main group because we assumed they would have nightly campfires.  Here’s a picture from the roof. 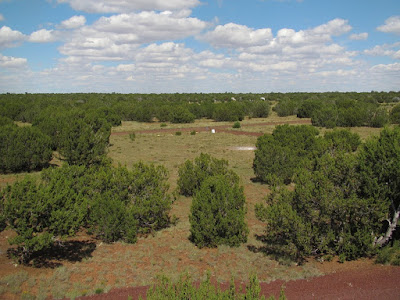 These lots were sold to unsuspecting out-of-staters who didn’t realize the problems associated with building there.  To dig a well, it would have to be over 1100 feet deep.  The ground is very rocky and a septic is either difficult and expensive or nearly impossible.  A few lots have electric, but it’s thousands of dollars to have brought in.  But it’s a beautiful place to boondock with an RV.

The celebration was five days of fun and reconnecting with old WIN friends.  Here’s John snuggling up to Corrinne. 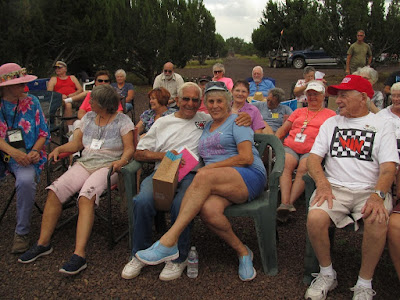 And here he is with the shirt that Ron and I bought him.  I can’t take credit for the idea since Diana bought one like it for our father’s 90th and Ron’s girls both bought similar ones for his 80th.  (I know, I know, it’s hard to imagine that Ron is 80, but all who know John find it just as hard to believe that he is 90.) 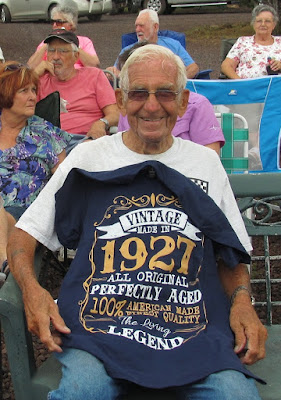 There were daily activities planned, both onsite as part of the celebration and off site.  One day we joined several other vehicles for a rough trip through the national forest to the top of Greens Peak.  On the way up, we had some excitement when Sue had a flat tire. 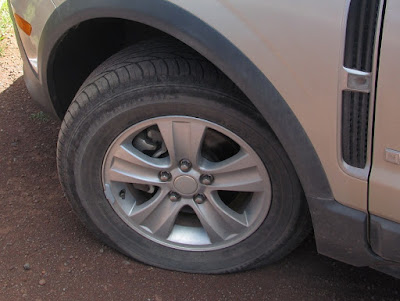 Ron to the rescue with our can of Fix-a-flat.  He used up the whole can which only brought it up to about 20 psi (which might have been because it was a really old can), then he got out the 12-volt air compressor to finish it off.  I was sure I got a picture of him at work, but it seems to be gone.  Sue is certainly braver than I.  Instead of turning around at that point, she just continued to the top with the rest of us.  However, days later, we heard that the tire was remaining fully inflated.  Amazing.

The view from the top was quite impressive. 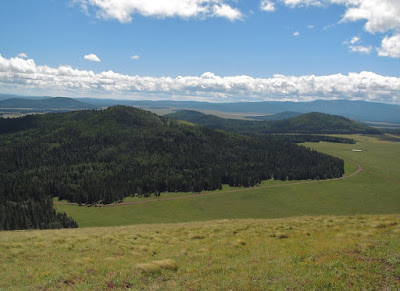 But it was also very windy as demonstrated by Larry and his ‘stay puft’ jacket. 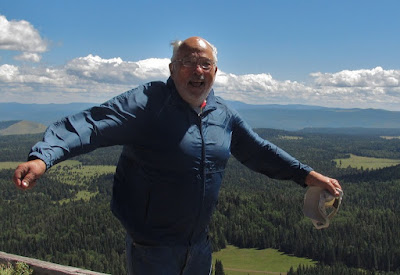 Later that day, we found out that Carol also had a flat caused by this giant metal spike that was so far in her tire that the end was level with the tread.  She’s smiling because she made it home before it went flat. 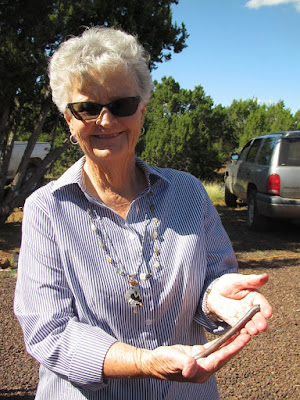 The actual birthday party was on Saturday and what a shindig it was!  His children had ordered unbelievable party favors, including can cozies, cups, name tags, and in the bag . . . 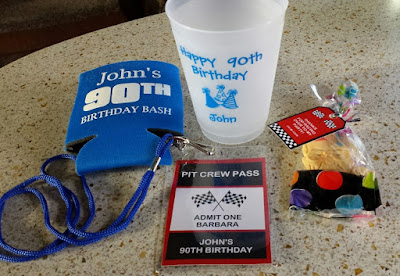 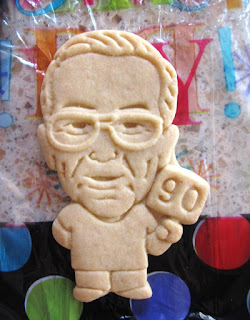 John even got the Mountain Saddle Band to entertain and they were terrific! 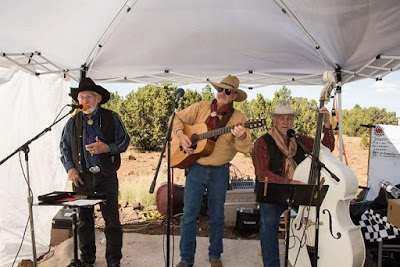 They had lots of pictures of John as a young stud, 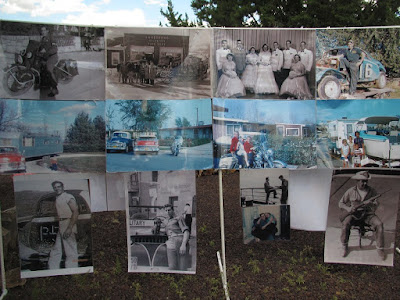 But he demonstrated that he still has it when he and Sally ‘pole danced’ on top of the storage container.  Sally was a real sport – even wearing his Budweiser shorts for our amusement. 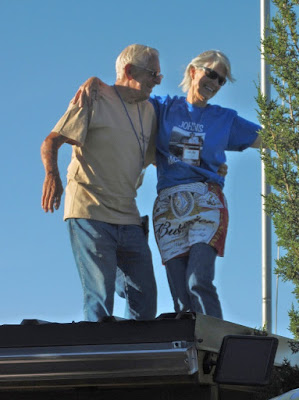 This last picture was posted and reposted so many times on FaceBook that I don’t know who to credit for taking it.  It’s most, but probably not all of John’s well-wishers who attended this very happy event.

We love you, John!

I know it’s been a really long time since I posted, especially considering we’re still on our summer travels.  But we did have a break in routine which always throws me off my blogging.  About two months ago, my father had a stone in his pancreatic duct.  He had previously had the same situation eight years ago, so he knew when the debilitating pain began, he had to get to the hospital.  His gastroenterologist again went in down his esophagus, through his stomach, into his pancreatic duct, and pulled out the stone.  Pretty amazing, huh?  All seemed to be fine when they released him from the hospital.  Unfortunately, all the antibiotics that they prescribed didn’t agree with him causing him to end up back in the hospital with dehydration.  Upon his release from the second stay in the hospital in a very weakened condition, I flew to PA to play nurse.  Although I am not the best caregiver, he is amazing, and by the time I left two weeks later, he was remarkably improved.  Whew!

Then, less than two weeks after my return, I left Ron again to visit my darling daughters in Florida.  I was on a roll.  We enjoyed our time together, and found time to visit historic St. Augustine.  The girls are even more camera shy than I am, so no pictures of them, but I do have a few of St. Augustine.

According to the plaque, this gate, opened in 1739, provided the only access through the defense line on the north side of Spanish St. Augustine. 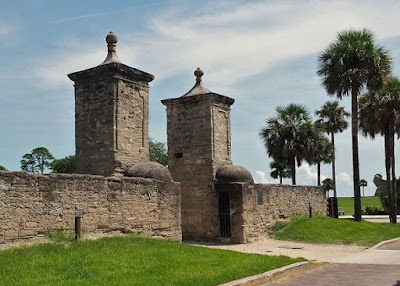 St. George Street is pedestrian only and filled with fun shops and eateries in the heart of the city’s historic district, 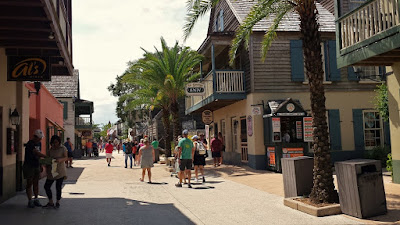 And home to the oldest wooden schoolhouse in the U.S.  The exact date of construction is unknown, but it first appears on tax records in 1716.  It’s not often you see something in the United States that’s 300 years old. 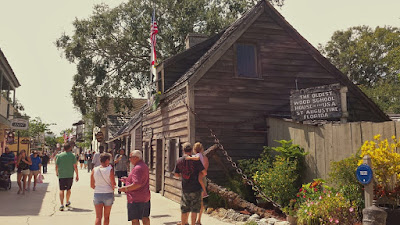 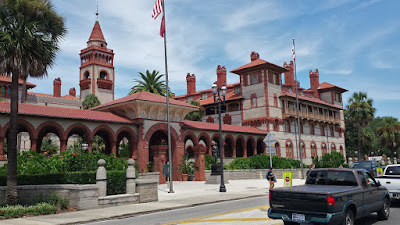 We were awed by the Cathedral Basilica of Saint Augustine. 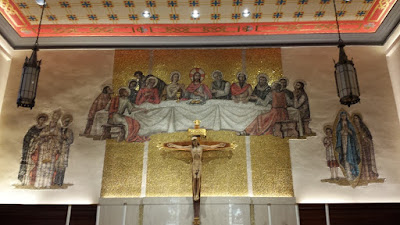 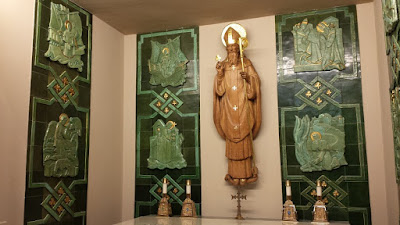 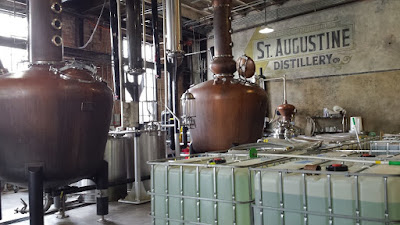 It was an interesting tour, but the best part was the tour guide’s appearance.  He looked the picture of an old-time distiller. 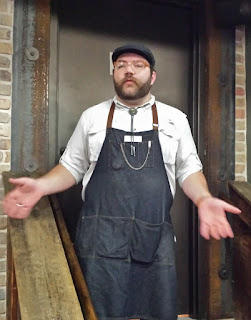 My daughter had free tickets for Potter’s Wax Museum or we probably wouldn’t have gone, but we were all very impressed.  The wax figures are remarkable and the displays are set up beautifully.

Here are some former U.S. presidents and first ladies . . . 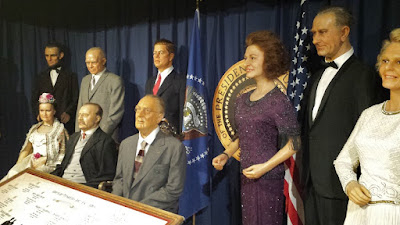 And some signers of the Declaration of Independence. 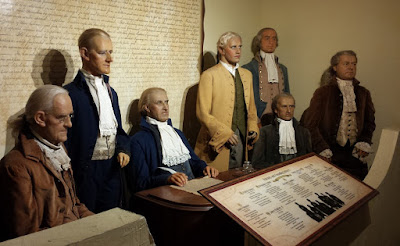 Look at the detail.  It looks like Albert Einstein is looking right at me!  His eyes seemed to follow me.  Alright, it was a little creepy. 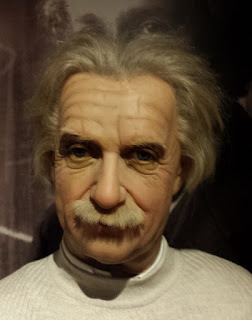 But speaking of creepy, there was a room with characters from horror movies.  None of us wanted to be first (or last) going through that room.  I really thought Freddy Krueger was going to leap out at me.  Yikes! 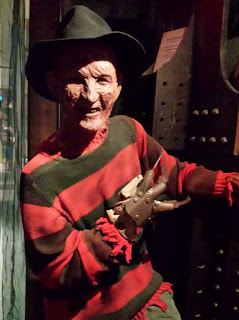 But General MacArthur gave me back my confidence. 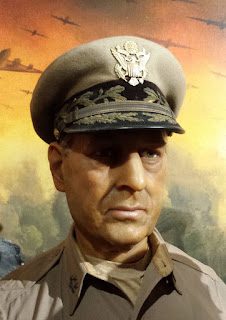 I did have a bit of excitement when hurricane Irma decided to hit Florida right when I was due to fly home.  I was lucky enough to get the last seat on a flight two days earlier for no extra charge.  Thank you, American Airlines.  I did feel like I was deserting a sinking ship, but luckily my daughters didn’t even lose electric.  We were all very thankful.