Yes, we are still in Mesa, Arizona - heaven in the winter and . . . well, you get the idea. The good news is that we are past the mid point of summer and recently the temperatures have only been slightly above 100. Yippee! We are also into the monsoon season when everybody complains about how humid it is. The highest I've seen the weatherman report is 27% humidity! That would be a really dry day anywhere I've lived previously. One day when the newscasters were complaining about it, it was only 19%! Funny. Of course it does jump up temporarily when it rains which hasn't happened too often so far.

Ron is tackling a couple of projects - he just couldn't take the inactivity. The top hinge on the gate was pulling out of the block fence so he tackled that problem. Doesn't he look serious? 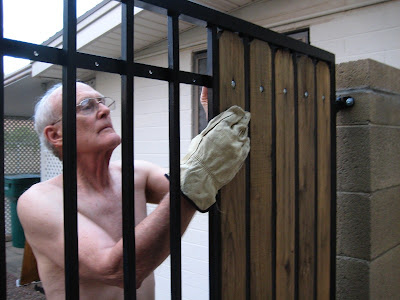 Although the citrus won't be ripe until winter, I noticed the lemons are getting pretty big so I thought I'd dissect one. If I didn't know better, I'd swear a lime was just an undeveloped lemon. 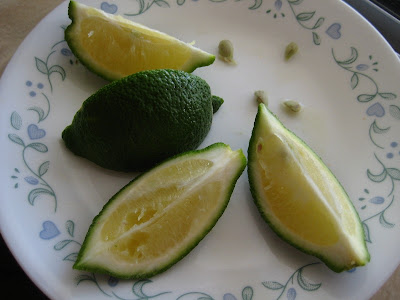 It was okay in my special home-made iced tea. 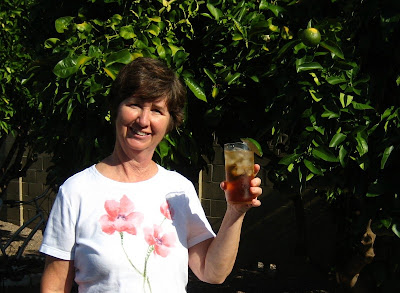 This sign just makes us laugh, but I bet you can get it cheap. The former restaurant has been the location of not one, but two fires within the past year. 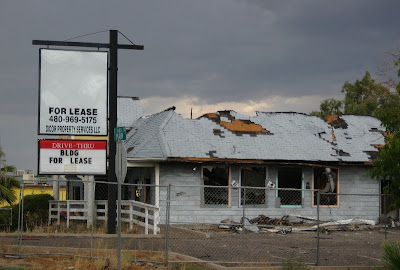 And this evening we had our first really impressive rain of the season. The lady across the street was trying to catch rain in a milk jug. Seems like the hard way to do it - I guess she didn't have a bucket. 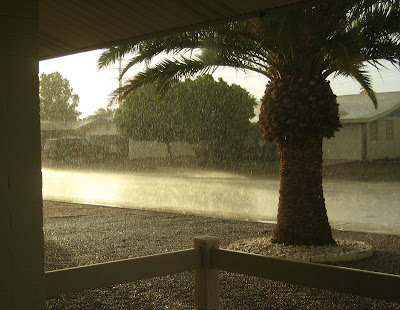 And now for the update on the continuing saga of Ron's problem hand. As you know, it's been almost five months since his finger started to have a problem. Today he was kicked to the curb by the third doctor. Well, to be precise, Ron dropped the first doctor who was a GP and moved on to a hand specialist. Doctor 2 cut into the finger in question, sent samples off for cultures and biopsy, and put Ron on a couple different antibiotics which may or may not have done anything. All the tests came back negative. Finally, Doctor 2 declared him cured and took him off the meds. Before the proverbial ink was dry, his hand started to swell up. Luckily Doctor 2 had made an appointment for Ron to see an infectious disease doctor a month earlier (the wait was that long) and we went to see her. Doctor 3 was clearly puzzled and sent Ron for blood work to test for everything she could think of and another biopsy. Today we went back for the results which are all still negative. Doctor 3 said it's not an infection and Ron should see a dermatologist. Now he has an appointment for next Monday with Doctor 4. Personally, I think his body will eventually get over this on its own, but he's pretty frustrated. Meanwhile he's able to keep the swelling down with the non-FDA-approved DMSO, otherwise known as snake oil.

By the way, I guess Ron's not the only one frustrated by this whole situation. The last time we saw Doctor 2, he told Ron that if he has any problem in the future to please call Doctor 2's partner. I don't think he was kidding.
Posted by Barbara and Ron at 8:50 PM