After six weeks of messing around taking antibiotics with little effect, last Friday we took Ron's finger to a hand specialist. Although I think the doctor would have continued the 'wait and see' attitude, Ron pushed for action and the doctor scheduled him for surgery today.

Here's the poor digit now. We can only hope they got all the bad stuff out. 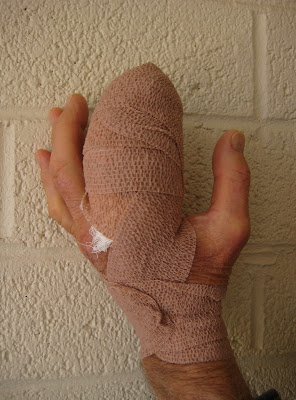 While in there, the doctor said he would take a culture to check for both bacteria (which came back negative last time) and fungus which was suggested by our WIN friend Karen who had seen similar symptoms during her nursing in ER. Antibiotics do not cure fungal infections, so we really pushed the doctor to check for that. I think I saw some eye rolling and Ron saw the nurse wink at the doctor. We don't care as long as they do it. 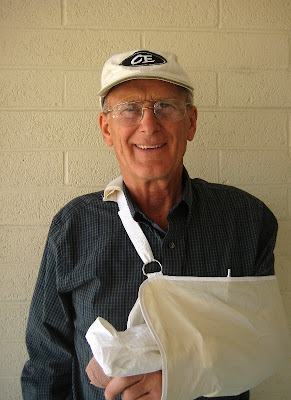 And here is what I think are the villains in this story. 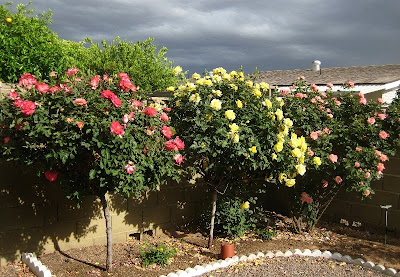 Shortly before the beginning of this tragic saga, Ron trimmed these rose bushes. Rose thorns are known to transmit fungus. Ironically, I don't like roses and had threatened to cut them down which is why Ron did the trimming this year. Next year they're going!
Posted by Barbara and Ron at 6:33 PM