Yes, we're still here in Mesa. We expected to be long gone by now, but Ron isn't finished with the dentist yet. He's getting an implant and it's a long process. We had a few really hot days and I started to panic, but it's cooled down again now. Even though the house stays pretty cool with the concrete block construction and we have air conditioning, I still don't like the heat. How spoiled we are with being able to follow the weather in the RV.

Meanwhile things are shaping up here. Ron's latest project was taking care of the shed. When we bought the house, the shed had been turned 90 degrees and was off its foundation. The door inconveniently faced the wall. You can see how rusty the roof was. 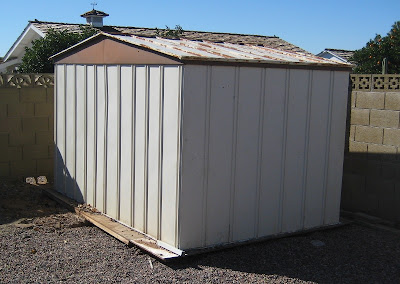 First Ron hooked a 'come along' (like a hand winch) to it to turn it around. 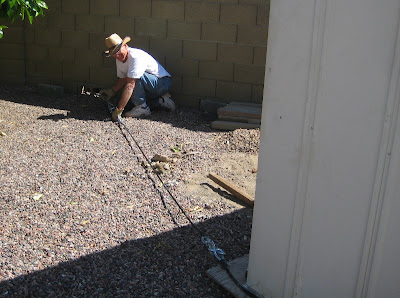 He hooked it to the wooden platform which I was sure was going to break off, causing the cable to fly back and knock him out. I was wrong about that, but I was right when I told him he would be able to use the extra tow cables that came with the new hitch. 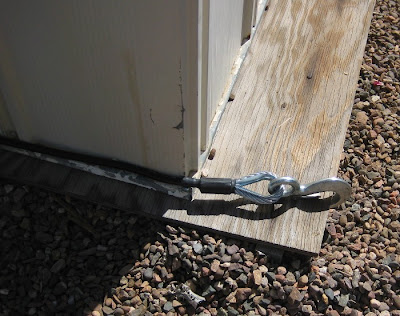 After he got it turned around, he decided to improve the base so we had to move it forward. I didn't get a picture of that since we discovered we could just push it ourselves. Using spare paver blocks that were lying around, he made a heck of a base to discourage critters from moving in. Once again, no picture.

Then he scraped off the surface rust on the roof and bought two cans of Rustoleum as a primer. As usual, we underestimated and he went back for four more. Then he painted the whole thing, even the floor inside. I'm sorry I missed the shot of him actually on top of the roof and he wouldn't climb back up to pose for a picture. Spoilsport! 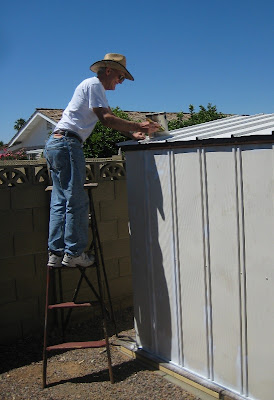 Now we have the most beautiful shed in the world!!! What a guy. 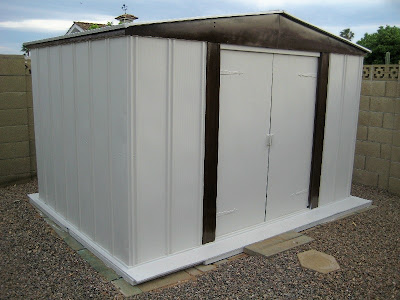