Well, actually, 25 miles. Today some of the WINs put their bikes on a bus to Aspen and biked back to El Jebel. And, yes, I am proud to say Ron and I were two of the brave(?), crazy(?) ones. First of all, let me say that contrary to popular belief, it is NOT all downhill. Actually I was about to give up and send for a car when we realized we were almost home.

Even the bus ride was exciting - figuring out how the bikes went on the rack. Each bus could only take four bikes, so half of us waited for the next one. All the guys were on the first one, so we women had to figure this out on our own since our driver didn't even get out of the bus. 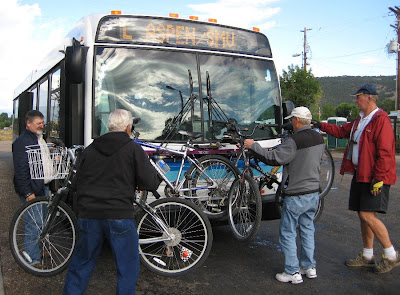 Here we are just starting out in Aspen. As you can see the bike path is lovely - plenty wide and paved most of the way. But I didn't notice the clouds following us until I looked at this picture. Yikes! 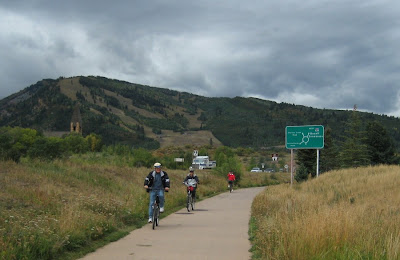 After a couple of miles, Brenda and Nancy still look great. Soon after this we did get a light rain, but most of us had raingear. 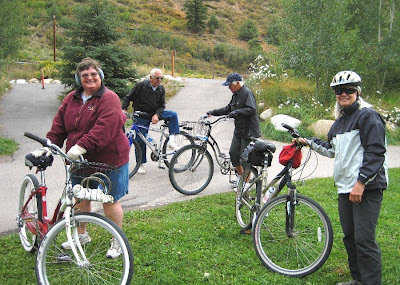 After about seven miles, we stopped for lunch. If we had read this sign on the way in, we wouldn't have been so surprised at the hostess's attitude. 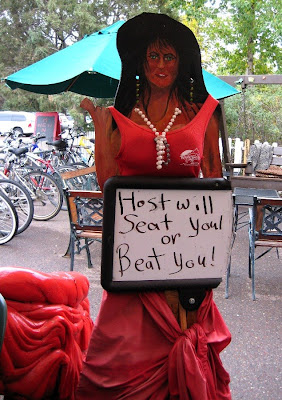 Here is the whole group involved in the outing except Brenda and me. From the left are John, Ron, Ellie, Joey, Nancy, Kurt, Bobbe and Diane. 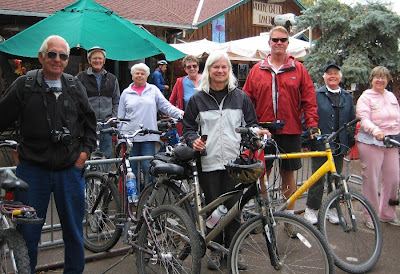 Joey and Diane had driven to the restaurant in Brenda's car and after lunch, Brenda and Ellie deserted us and rode home with them. And then there were six.

Luckily the rain passed while we were eating and we had nice warm sunshine. 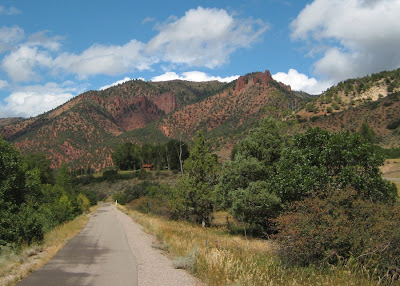 By the way, I'm pretty proud of this picture since I took it one-handed while riding.

Most of the path was 'rails to trails' - a converted railroad bed. Unlike the way most of these are created (rip up the rails,then pave or gravel), this one still had rails either next to the path, or, I suspect, underneath. We passed a couple of these railcars that are obviously being used as housing. This one had a wooden deck and a satellite dish. 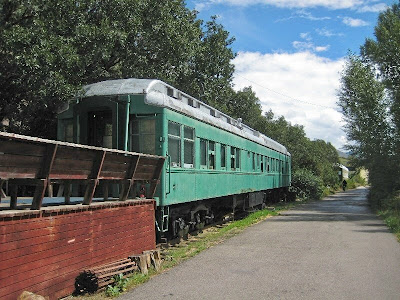 Yikes! More threatening skies, but at least we only had a few more miles. However the accompanying headwind really did me in. (But I still had enough balance for another one-handed shot!) 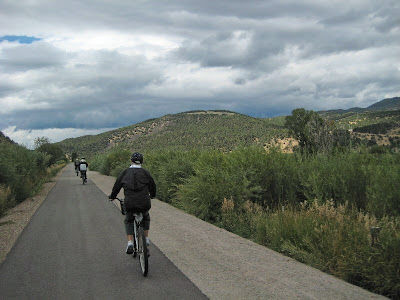 I know, I should have gotten a picture of us at the end, but instead I just staggered inside. At least I wasn't the only one who was wiped out. The amazing thing is the one least affected was John who will be 82 on Saturday. Of course, as Brenda says, he is from another planet.
Posted by Barbara and Ron at 7:49 PM