I've visited Grand Junction several times now and I can see why Grand Junctionites (?) like it so much. They have Grand Mesa to the east, Colorado National Monument to the west and the junction of the Colorado and Gunnison rivers right in town. For me, it's the perfect-sized town - big enough to have everything you need, but small enough to still have a small town feel.

They also have a nice paved bike path along the river. Here we are ready to try it out. Don't ask me what John is looking at - maybe he thought he heard a UFO. (Photo courtesy of Judy - thanks, Judy.) 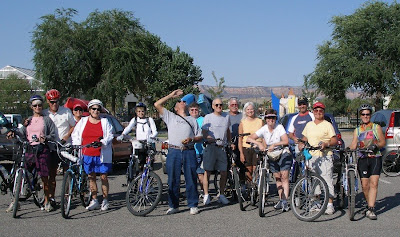 And we're off. That nicely spaced line didn't last long. 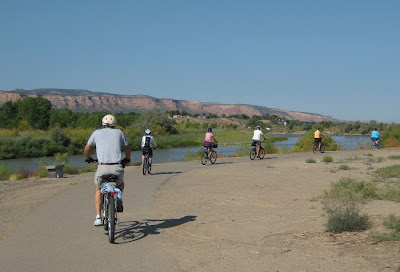 I see I'm not the only person who takes pictures while riding. 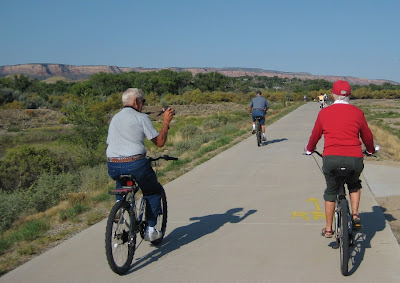 Since this is part of the fall kayaking circuit, there were two kayak trips. Marvin found a trailer for us to rent to simplify the transportation logistics. Here he is making final rope adjustments on his truck. 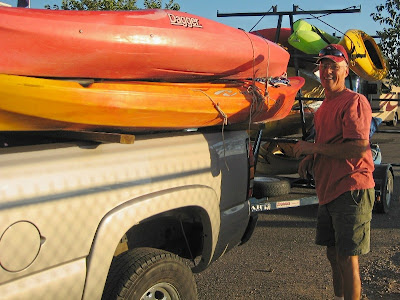 While Ernie and Ron help with the trailer. At least I think Ernie is helping. 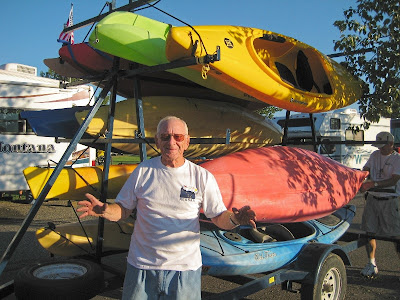 Although Ron went on both paddles, I only did the shorter one down the Colorado past where it merges with the Gunnison. It was just the right amount of excitement for me - lots of moguls (you know, bumps in the water.) Since I'm afraid to get my camera wet, these three pictures are Max's. What would I do without other peoples' pictures? 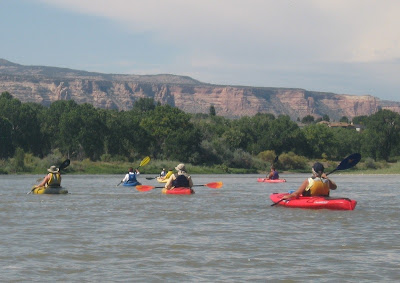 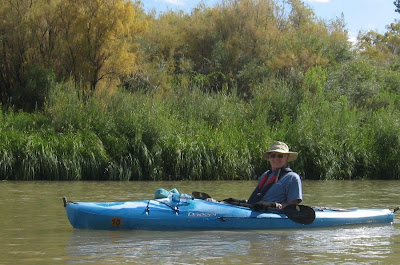 And me! Thanks, Max. 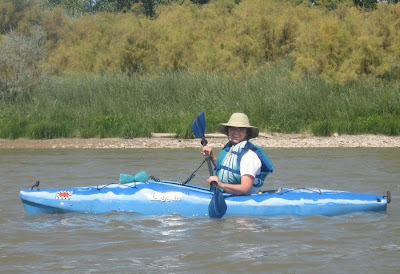 Hiking (in the Monument,) kayaking, and biking were the three parts of Peggy and Marvin's triathlon. Knowing that we are really just big first graders, they gave a gold medal to everybody who participated in all three events. Don't we look proud? (Kathy and John also earned a medal, but did not attend the ceremonial dinner at the Golden Corral.) 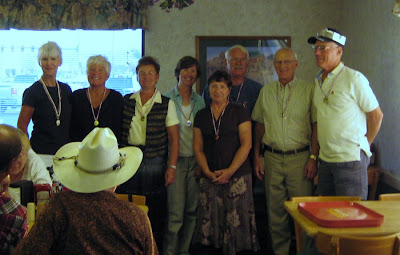 And they also had a photo contest which I didn't win even though there was a three-way tie for first place and I think only five people entered. Peggy, Max, and Joey were the talented winners. 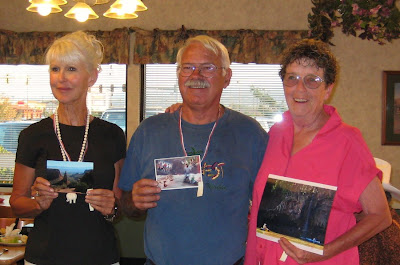 We finished out our stay here with a dance at the Moose. As you can see, the WINs can get a little wild. I think Phil is doing some kind of robot dance here while Bertie, Judy, Nancy, and Max do their own thing. 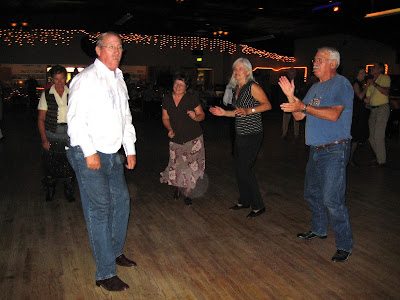 We leave Grand Junction for Moab tomorrow, no, make that today, and I'm sure Peggy and Marvin are glad to hand over the reins. We certainly had a great time here and look forward to next year when Peggy is planning to have us climb Independence Monument. ;-)
Posted by Barbara and Ron at 12:30 AM