On Sunday, 17 of us took off in six vehicles for a 4-wheeling adventure. Max was our leader and did a fine job of choosing the route and guiding us. I jumped at the chance to ride with John in his Jeep Grand Cherokee. After riding with Phil in his Grand Cherokee on the trip to Crystal (previous post Marble and Crystal,) I recognize it as the Cadillac of 4-wheel vehicles. Instead of coming with us, Ron went to a nice brunch with several of the others (yawn.)

Here we are starting up Long Canyon. The drivers in order are Max, Bertie, Ernie, Bob, John, and Tom behind us. It wasn't as smooth as it looks in this picture since it was pretty rocky, but then it wouldn't be any fun. And it was beautiful. 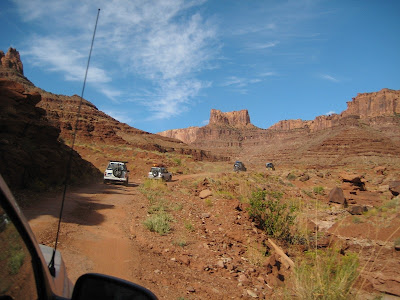 This dip was a challenge and a couple of the vehicles bottomed out. (Yes, I'm doing that back-seat shooting again.) 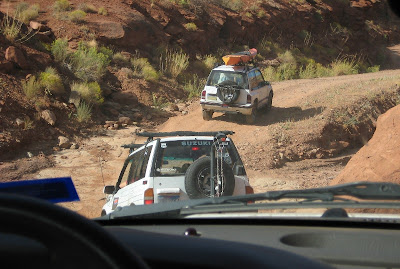 Soon it became more difficult as we climbed switchbacks and went through some sandy spots. This natural tunnel was pretty interesting. 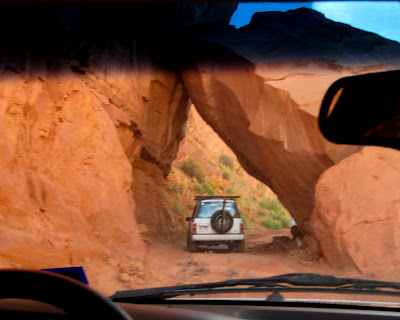 But nothing compared to when we ran into this huge truck going down. The driver looked pretty concerned when Bob passed in his Suzuki, but she really got nervous when we went by in John's larger vehicle. 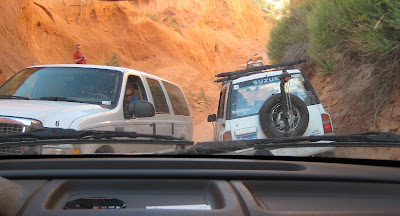 Finally, we reached the road into the north section of Canyonlands National Park. Canyonlands is divided into three sections with the northern one being Island in the Sky. This is a very appropriate name for this broad mesa between the canyons formed by the Colorado and Green Rivers. At the end of the road is Grand View Point Overlook. I really feel the vastness of Canyonlands from this point - it's truly awe inspiring. Unfortunately, it's an early morning or late afternoon picture, not to mention something that can't be captured in a photo. 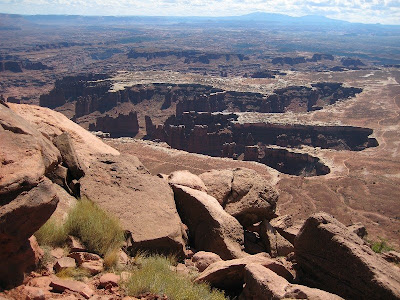 While there, we broke out the lunches. WINs are always happy when eating. 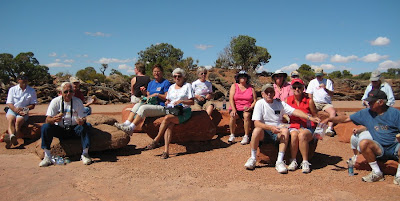 It struck me in the parking lot how funny we all looked - carrying kayaks on a mesa with no water - even funnier on the 4-wheel trails. 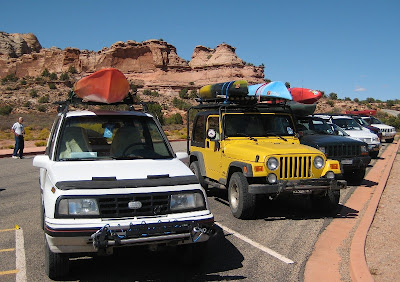 Later at one of our stops, Bob had a problem with his car overheating. Luckily John was able to 'sniff' out the problem. 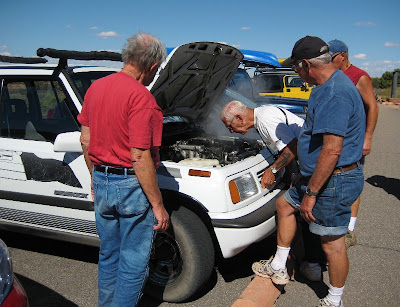 We did the short hike to Mesa Arch - my favorite spot in this part of Canyonlands. I love how you can take a picture of the formations through the arch. 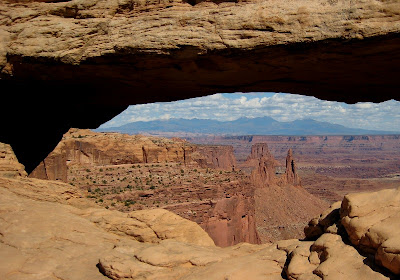 If my daughter sees this she'll have a heart attack, although maybe she won't realize there's a 1400 foot drop on the other side. Don't tell her. 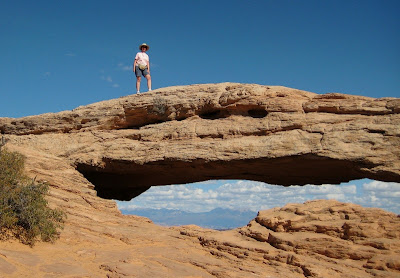 To get back down off the mesa, we took the Shafer Trail. By means of hairpin turns, this dirt road hugs the canyon wall and descends 1400 feet to the White Rim Mesa, then a more gradual 700 feet to the Colorado River. I have always wanted to do this trail but didn't have the right vehicle. I was very excited. And exciting it was with steep switchbacks and (of course) no guardrails. But I think it's been widened recently. I remember watching a full-sized pickup truck make a 'K' turn to get around the turn. In this picture, Max and Bertie are waiting at one of those turns for a Jeep coming up hill to pass. You can see there is plenty of room. 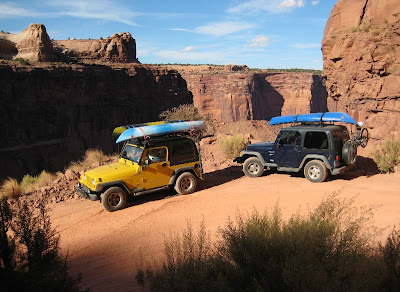 Here's the other Jeep. You can also see some of the road and one of the turns. It was late afternoon by this time and we were down to three vehicles. Two of them took the paved road home because of time constraints and Bob's Suzuki was sitting at the Visitors Center with a cracked radiator. 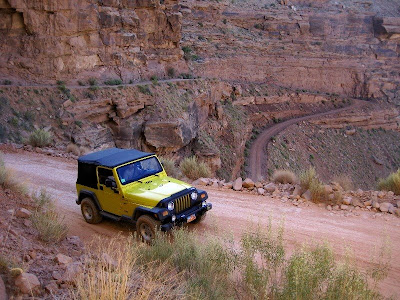 We saw these interesting formations along the White Rim Mesa. 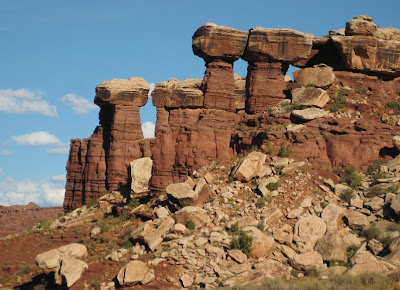 Even when we could see the river, we were still about 1 1/2 hours away from home. In all we were gone about 9 hours. My hat's off to Max, Bertie, and John for the fine job they did, but next time I'm going for a shorter trip. 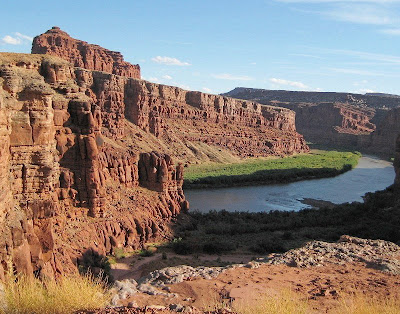