The Dellenback Bike Path is an 11.5 mile paved trail around Diamond Lake. It is mostly level and rated easy, but I'm really not much of a cyclist. We were staying at the south end of the lake in Broken Arrow CG which has connecting trails to the bike path. I suggested we go clockwise around the lake with the thought that we would be most of the way around when we passed through the resort area with a cafe where I could refuel for the rest of the trip. Pretty smart, huh?

So off we went confident that our blazing speed would keep us ahead of the hungry mosquitoes. 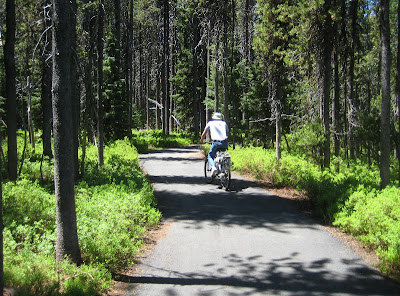 For the most part, that worked, but I did take a risk stopping to take pictures. 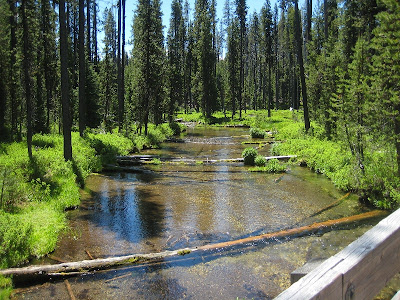 Mt. Thielsen is on the east side of Diamond Lake. The lightning rod spire at the top is a volcanic core that was worn down by glaciers. 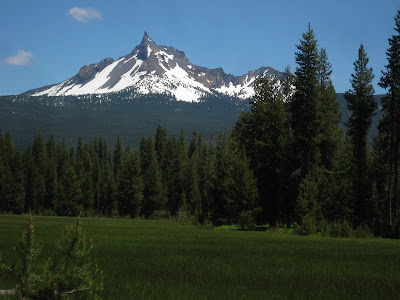 Here are Thielsen and the Sawtooths - sounds like a musical group, doesn't it? 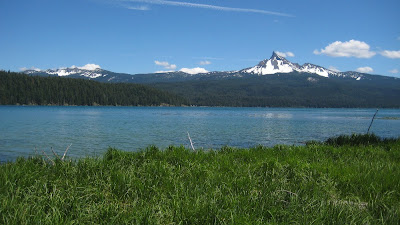 And to the west of the lake is Mt. Bailey, also formed by volcanic action, but looking very different. 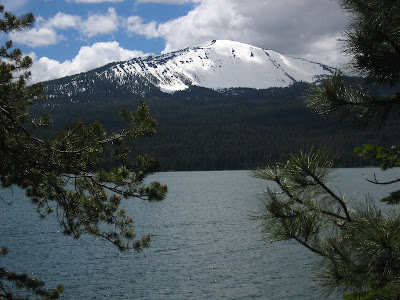 It was really a lovely ride although we did hit some swarms of tiny flying bugs. It reminded me to keep my mouth shut. During this stretch, I heard a young girl forcefully say to her parents, "Next time we WILL take the car!" I had to laugh. Kids!

And yes, we did stop at the cafe, but I only had iced coffee while Ron had a sundae!
Posted by Barbara and Ron at 10:46 PM