This might have been my favorite day.  Promptly at 8 AM, we boarded a bus (a Prevost, no less) for the first half of our trip north.  Our tour guide Michael introduced us to our bus driver Michael.  Humm, that made it easy to remember their names.  There were 48 of us who would at least recognize each other by the time we transferred to the ship on day 4.  That was an advantage of taking the tour first, because when we encountered any of the others on the ship, it was like a reunion.  Michael informed us of Alaska facts and points of interest along the way, including the fence around Sarah Palin's house in Wasilla.

The bus trip ended in Talkeetna, supposedly the inspiration for the town of Cicely from TV's Northern Exposure, but I don't remember Cicely having so many souvenir shops.

But my fun really began when we boarded the Alaska Railroad for the remainder of the trip to Denali. 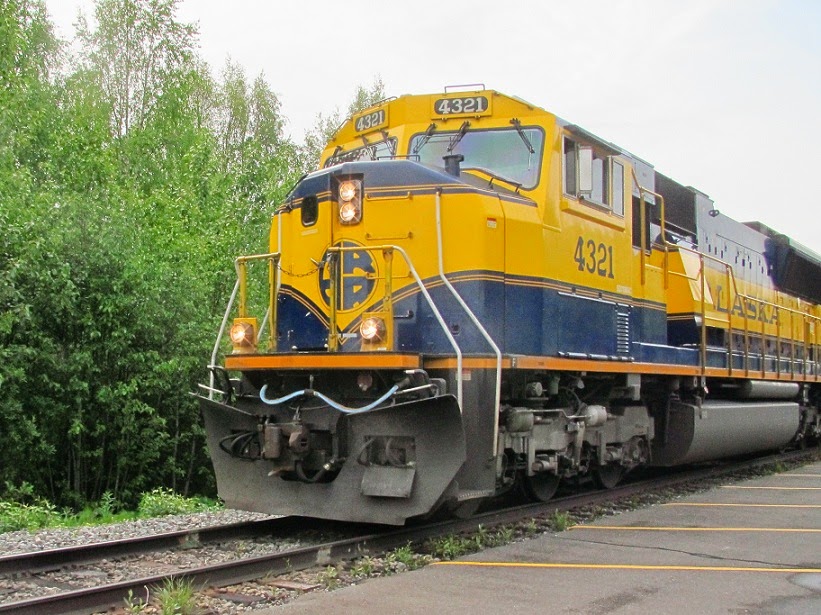 And we weren't riding in just any old rail car, but in back half of this fancy, dancy observation car. 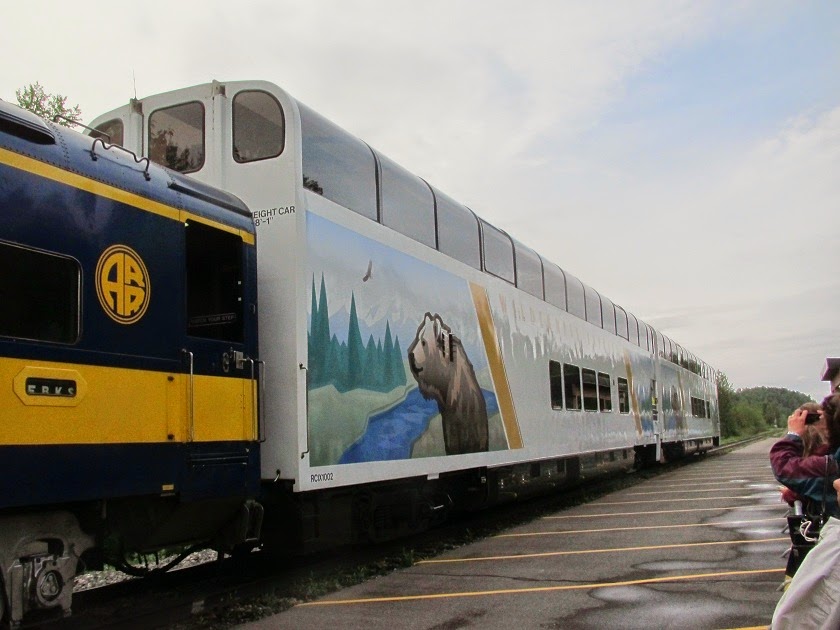 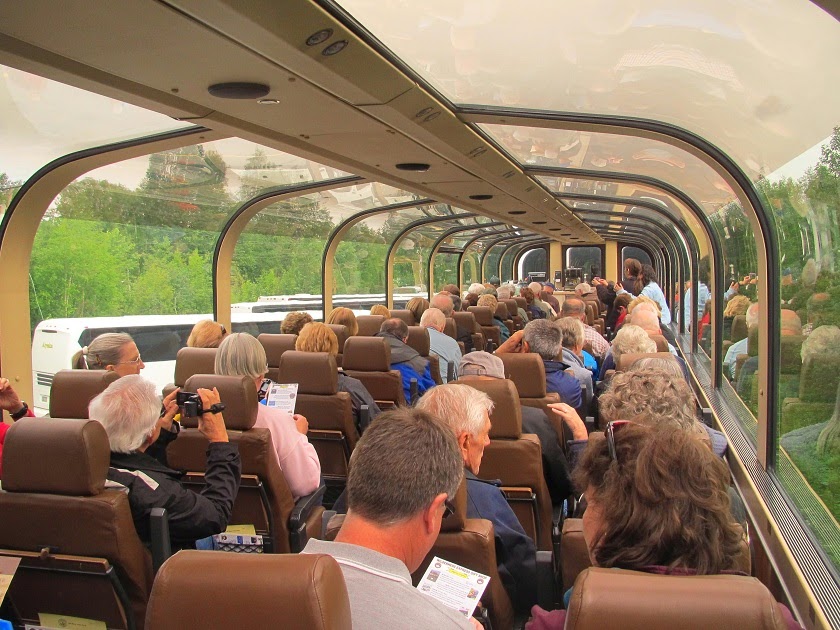 At the first break in the trees, we were all snapping pictures out the window. 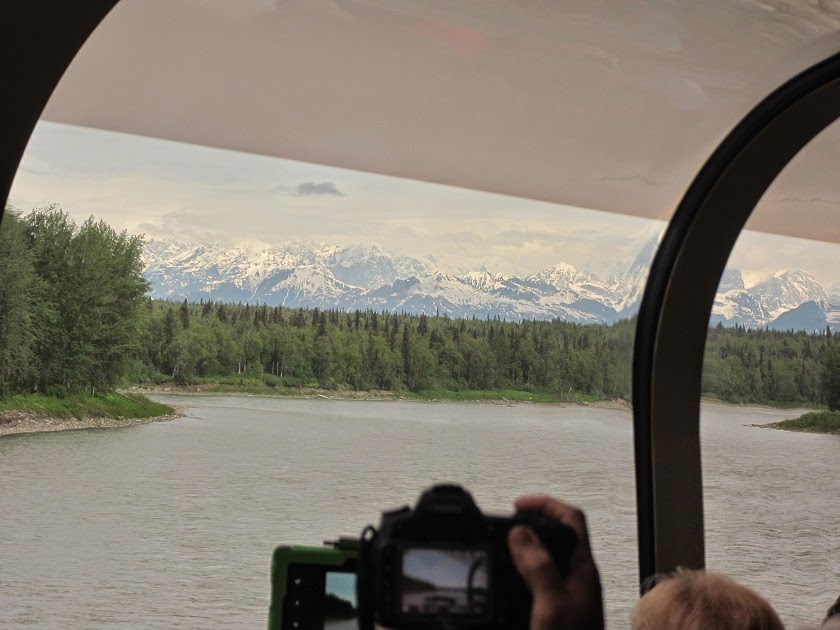 But soon we were called downstairs to our own personal dining room.  Ron and I split a french dip sandwich, so we could share the wildberry pie à la mode.  Yummy!  (Don't bother looking for us, we were at the empty table on the right.) By the time we got back upstairs to our seats, the scenery was changing and becoming even more interesting.. 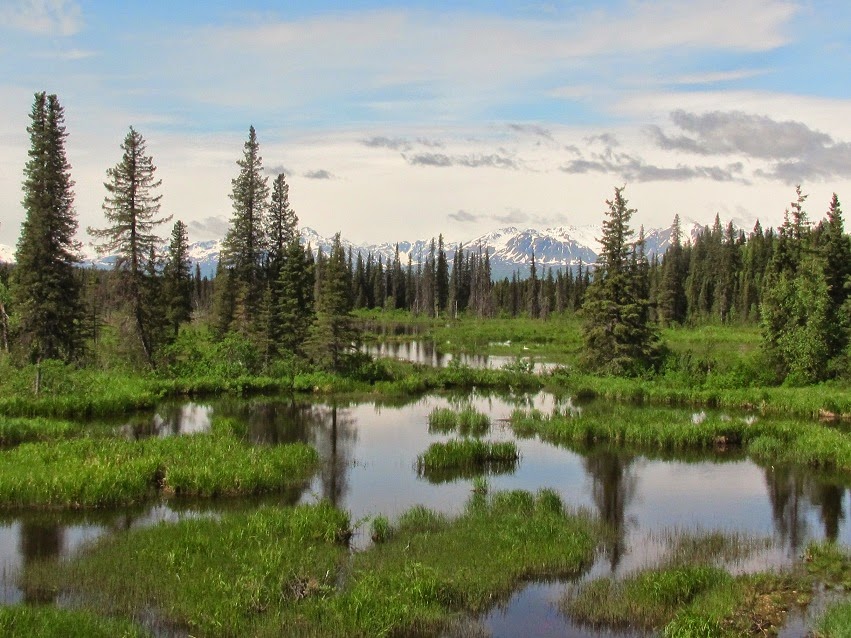 Since we were in the last car, we also were able to pop out on the rear deck. 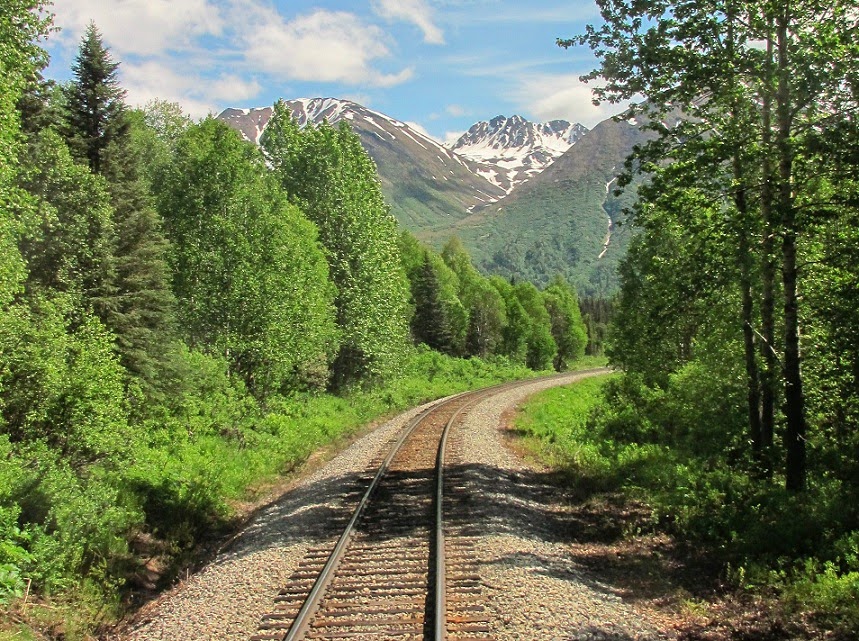 I wasn't the only one trying for a picture of the engines going over a trestle. 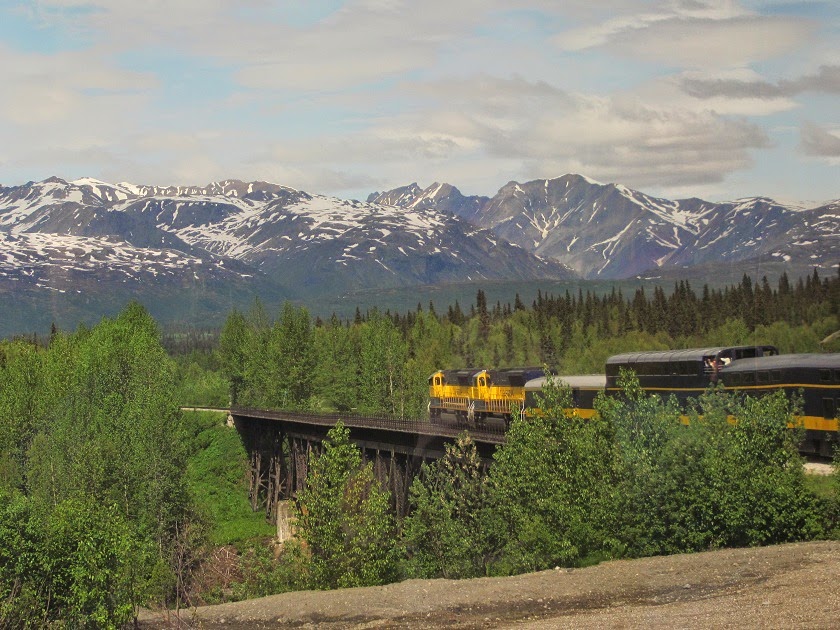 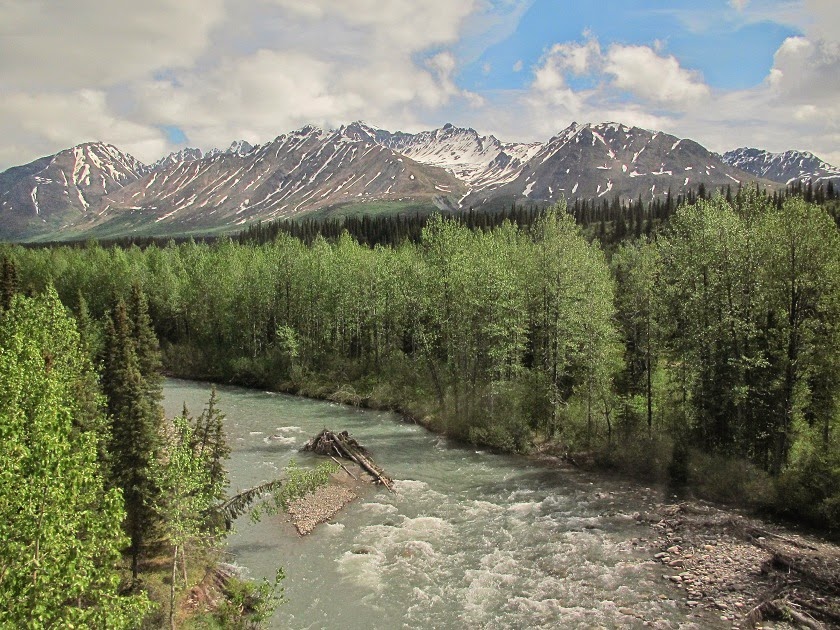 One more out the back. 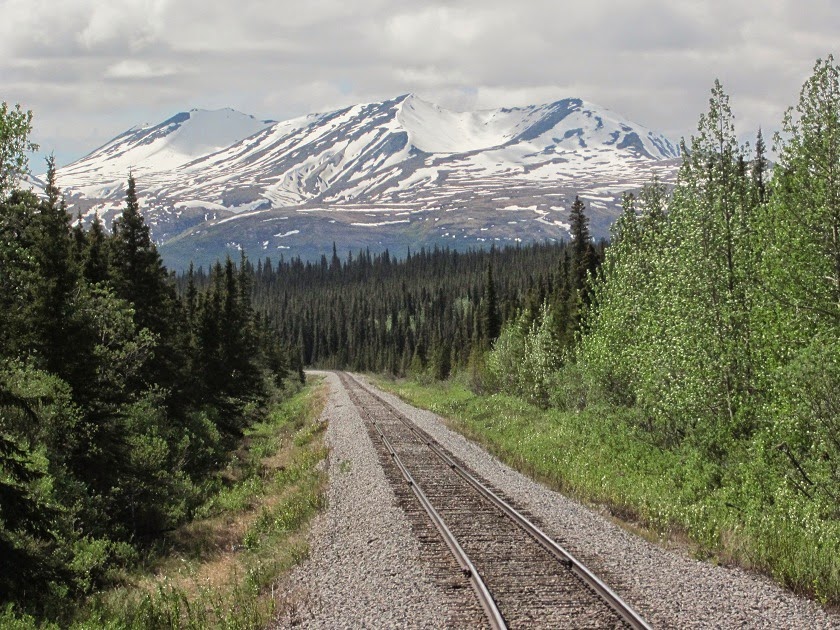 Down there, right next to the river, we spotted our home for the next two nights, the Grizzly Bear Lodge. 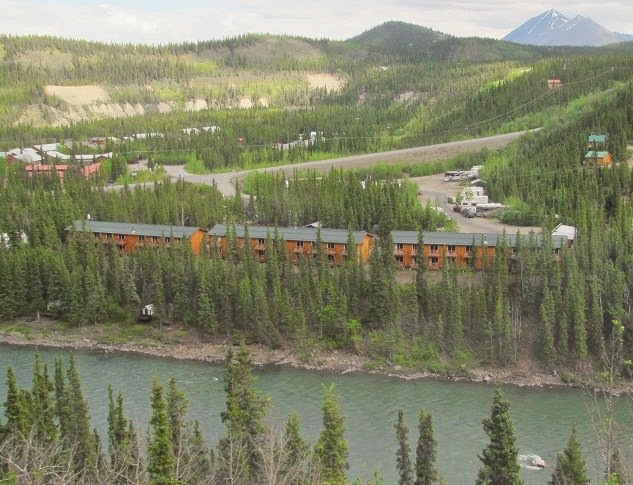 The rooms were really cute. 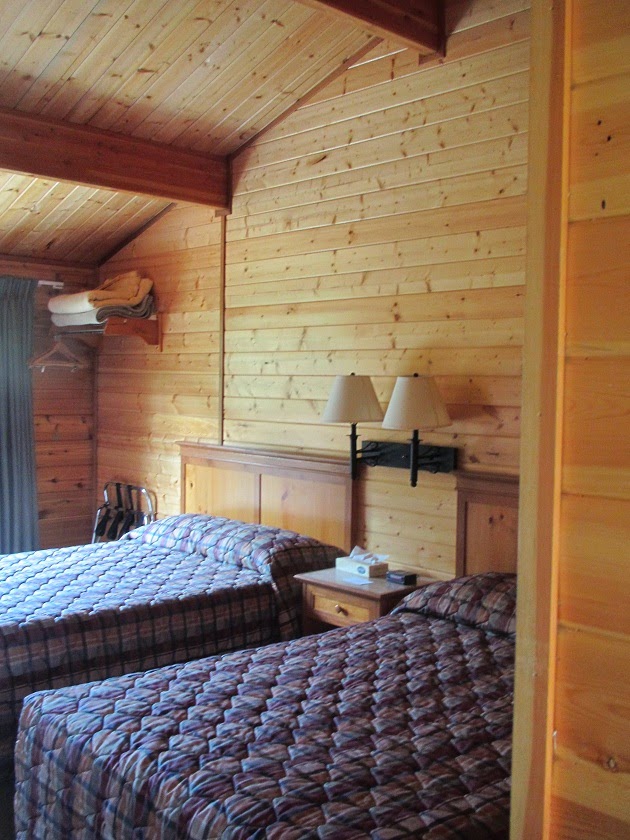 Each room had a little balcony overlooking the river. 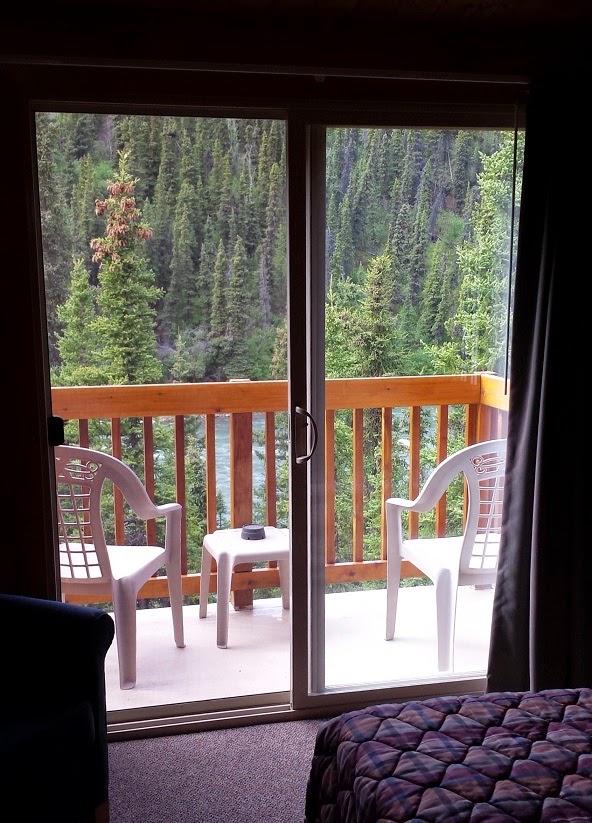 The lodge was about 5 miles from the entrance to Denali National Park and about 6 miles from Glitter Gulch. Glitter Gulch is a collection of lodging, restaurants, and shops, with no pretense of being a town. 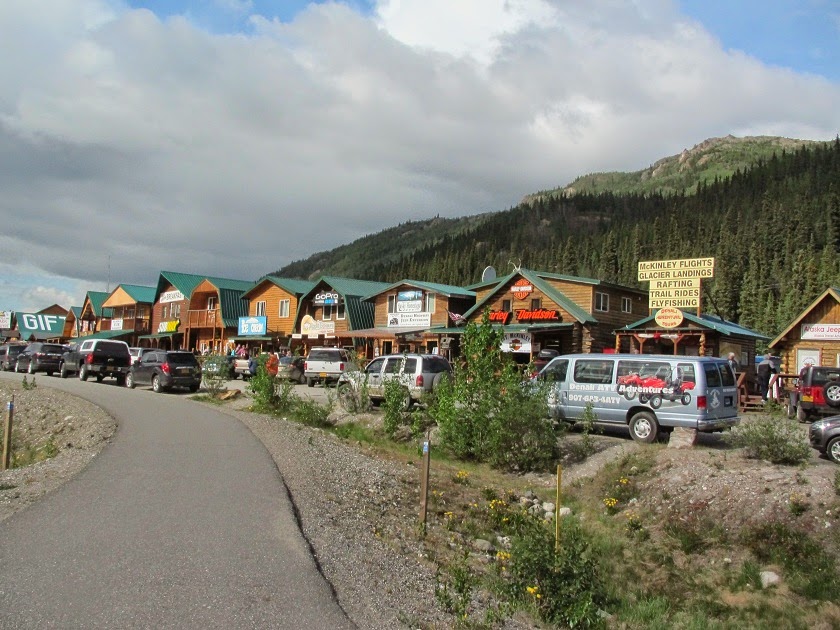