For our final day in Hawaii, we did a paddle/hike to Secret Falls and Fern Grotto.  In exchange for a good deal of cash, they rented us a canoe and a really pathetic map.  Since there was an outside possibility that we would get wet, Diana took all these pictures with her nifty underwater camera.

Here come the intrepid explorers.  Interesting that they give you kayak paddles with the canoe. 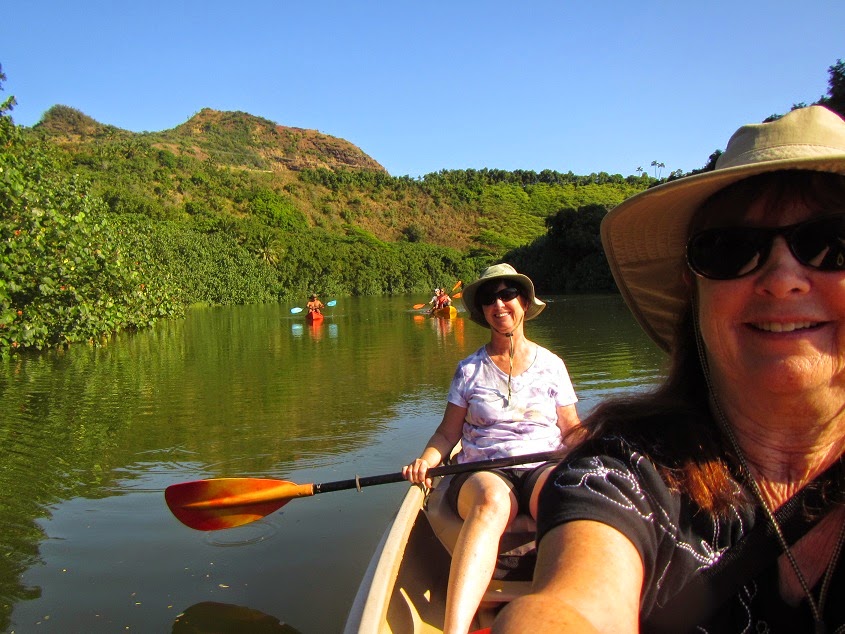 After a false start, we managed to find the trail. 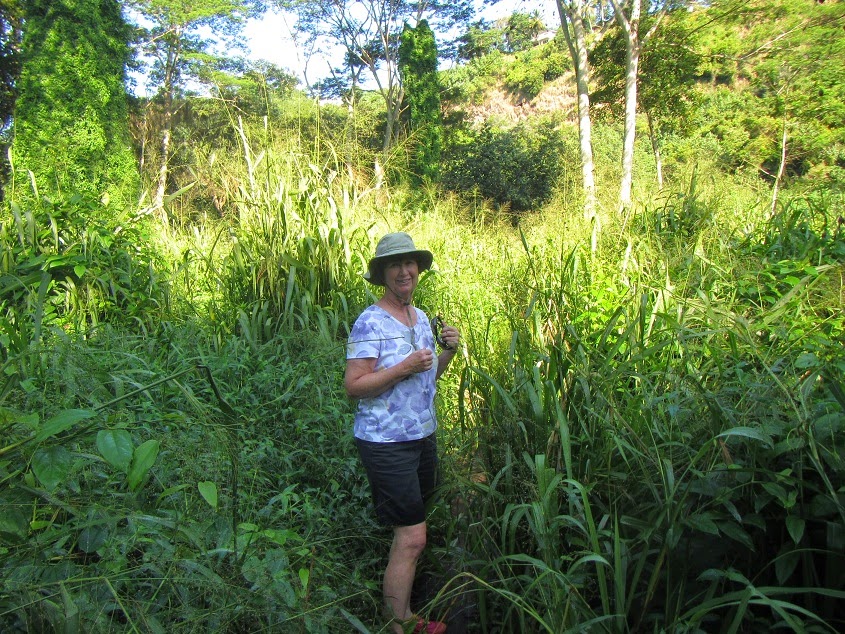 The section of the trail along the river was very well defined. 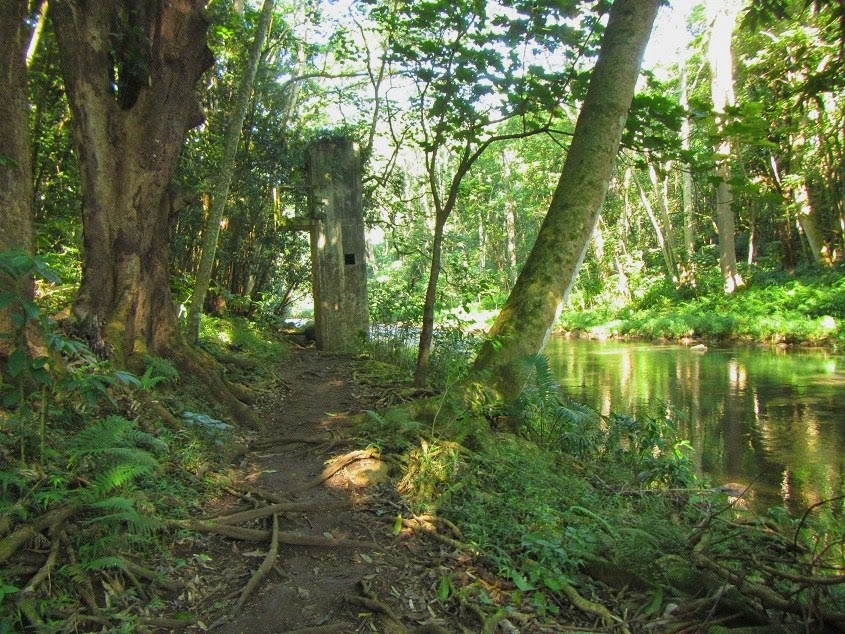 In other places, it was pretty rough. 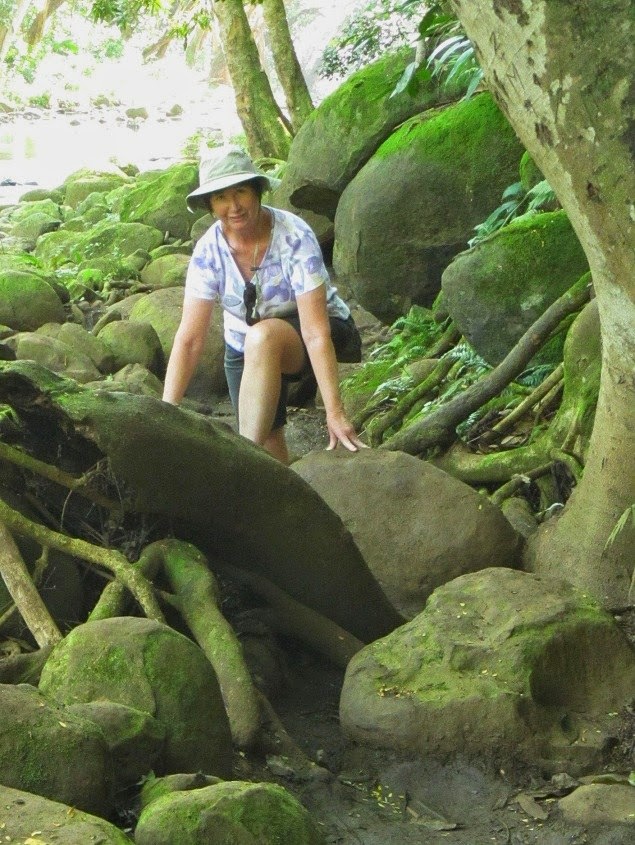 And there were a few water crossings.  The first one was at least 30 feet across in rushing knee-deep water, but we were too busy staying upright to take pictures. 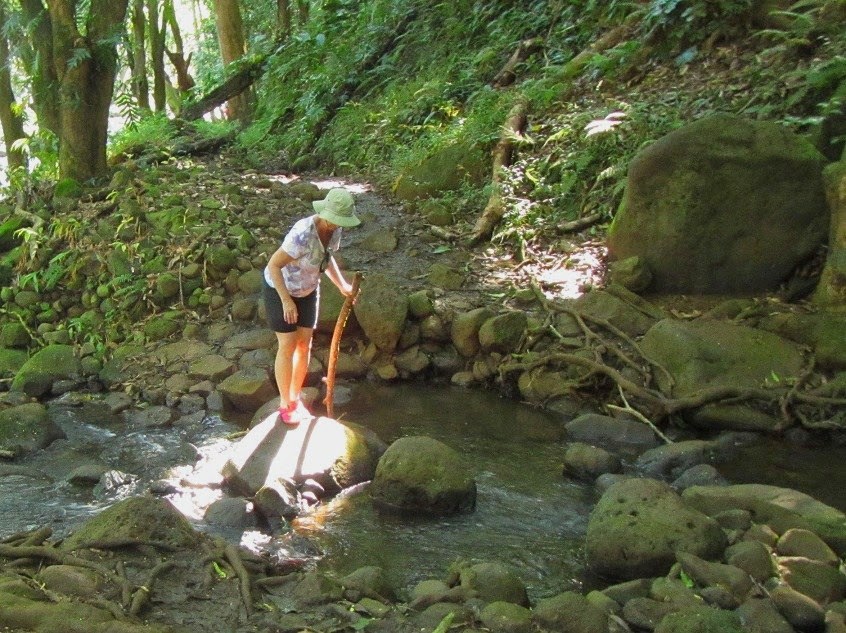 This is the King's or Queen's Bath - Diana probably knows which one. 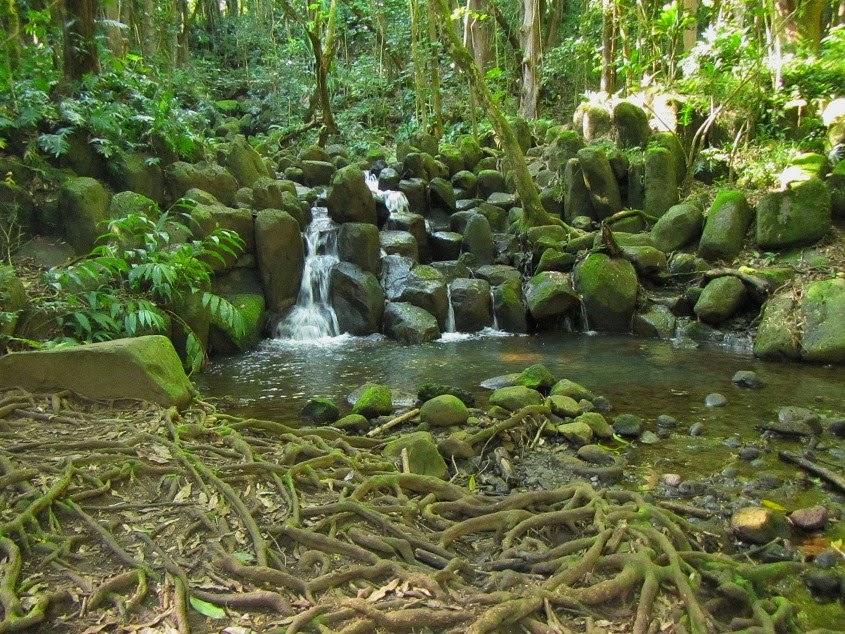 After about a mile, we arrived at pretty Secret Falls.  (Shh, it's a secret.) 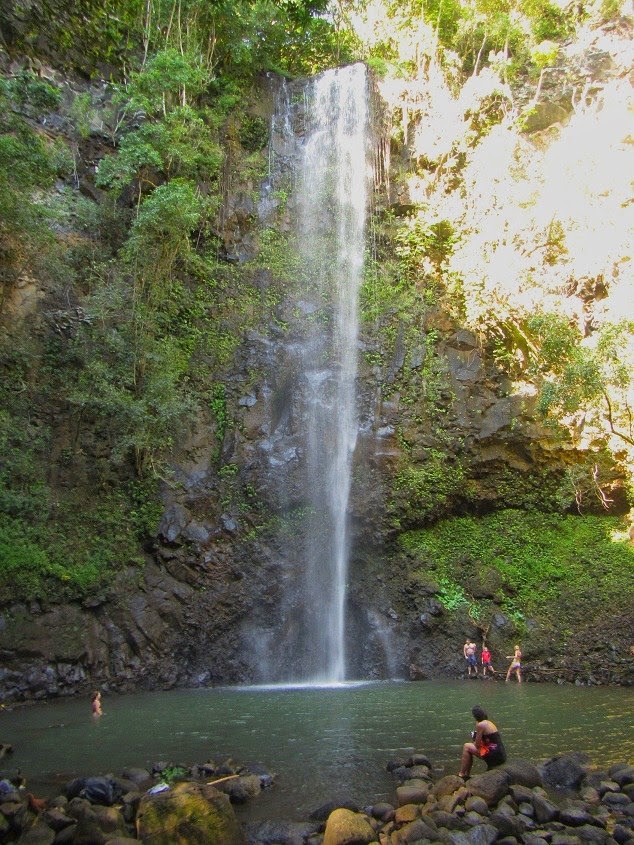 With all its resident Kauai chickens. 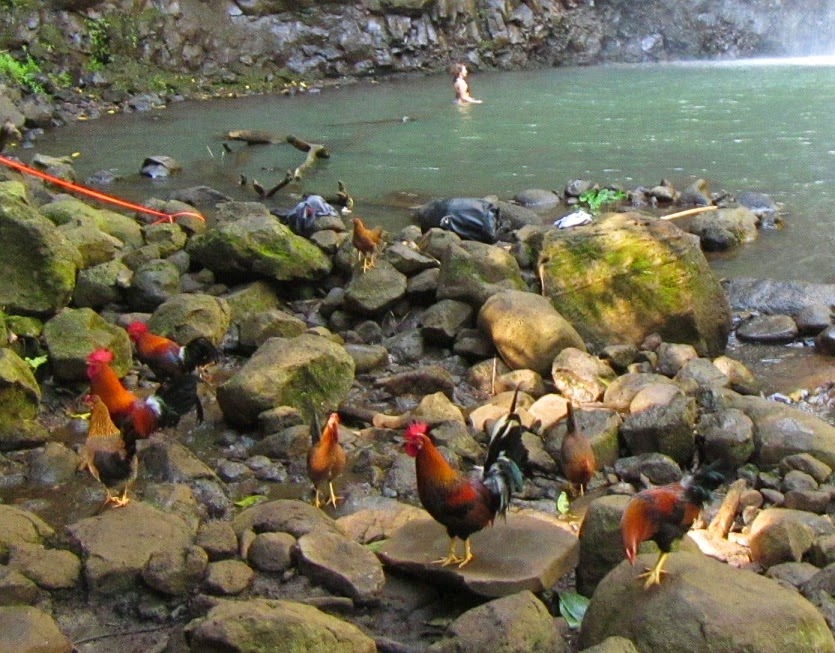 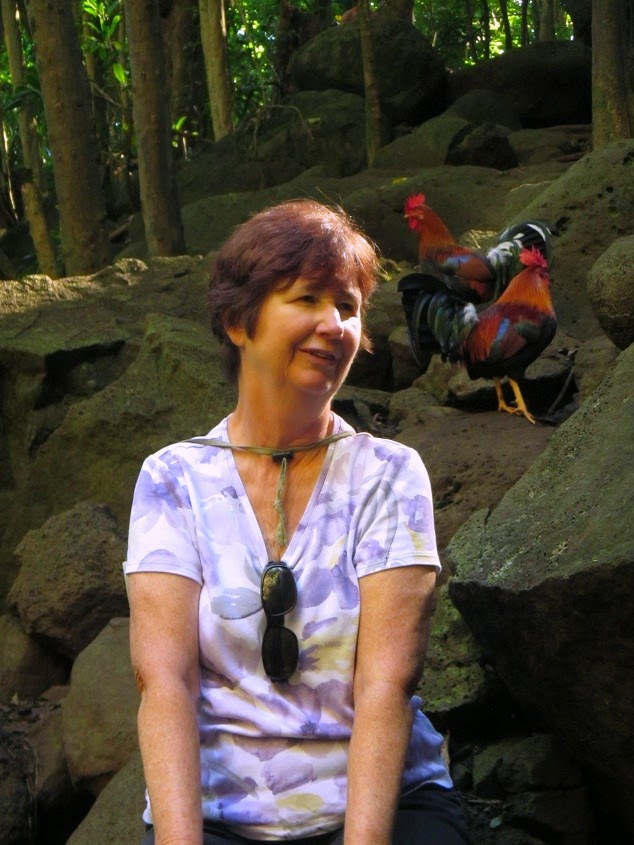 The hard part came when we tried to find the other half of the loop trail back.  We were lucky to come across the trail we had taken out, but not where the loop was supposed to meet it.

Next we canoed to Fern Grotto where we had to get out of (and back into) the canoe as it sat next to a rather high dock.  I'm glad nobody was taking a movie of that!

After a short walk, there was lush Fern Grotto. 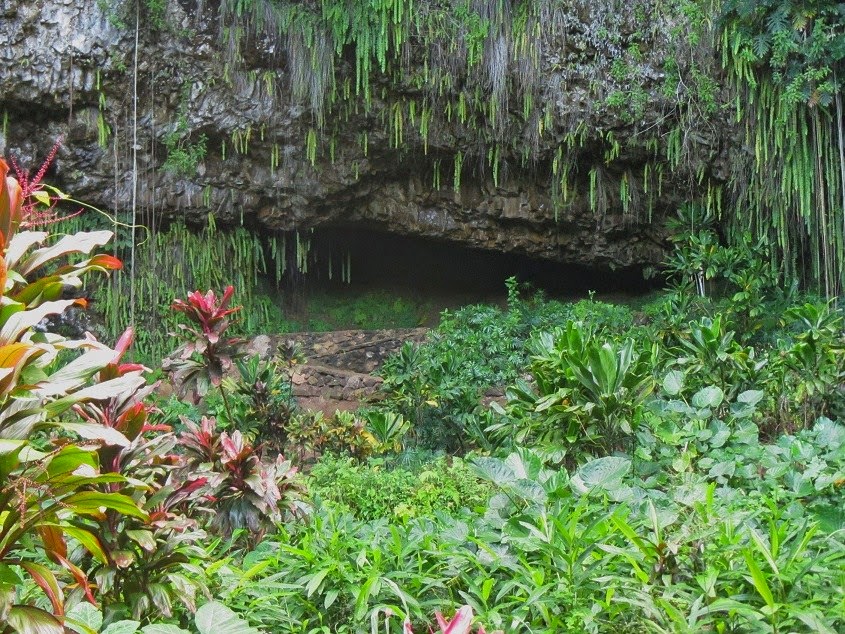 Those are Boston Sword Ferns that give the grotto its unusual look. 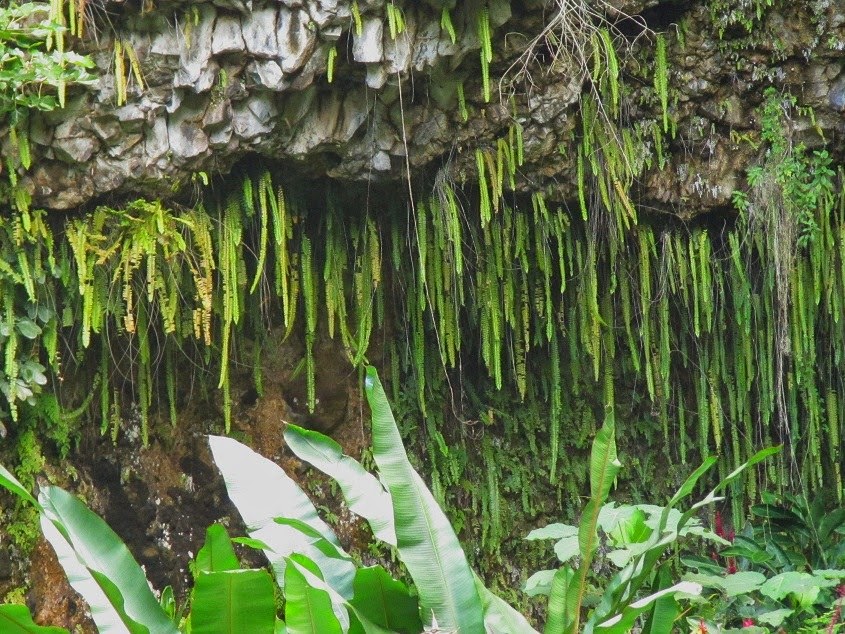 All that hiking was done in our water shoes.  I had just bought mine at Walmart for the unbelievable clearance price of $3!  I can't imagine why they would be so cheap.  LOL 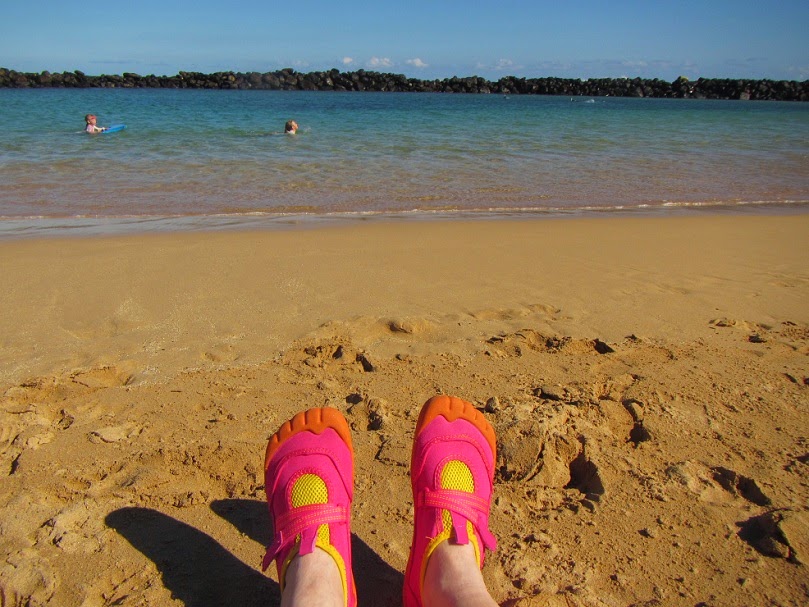 And I did finally go snorkeling.  We went to Lydgate Park where there is a section of the water blocked off with a rock wall.  (See above)  Just right for me.

Here I am all ready to take the plunge. 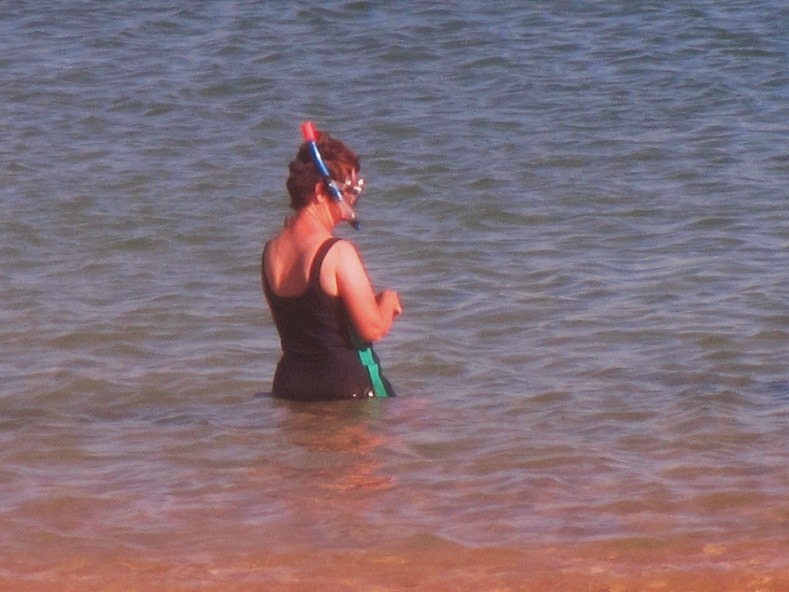 Diana was supposed to take a picture of me in the act, but she was distracted by some pigeons and by the time she looked again I was done.  But I  saw little blue fish, big blue fish, and little striped yellow fish.

This concludes our wonderful week on Kauai.  It was all I could have hoped for - a true tropical paradise.
Posted by Barbara and Ron at 8:00 PM