Traveling the Back Roads

After saying goodbye to our friends near Show Low, we headed east on US 60. It's a really nice road with no big trucks, but there were several wide loads. Go figure. Anyway here are some of the high points along the way.

Literally a high point, Pie Town, New Mexico, is located at the Continental Divide. It's obviously named for its main source of income. And yes, I begged Ron to stop. Besides being a restaurant, this was the library and the Chamber of Commerce! 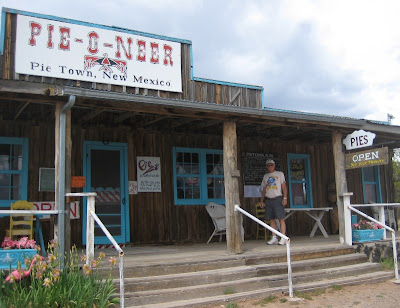 The owners were very nice and volunteered to take our picture enjoying the blueberry pie. Sadly they were out of ice cream - don't go on a Monday. 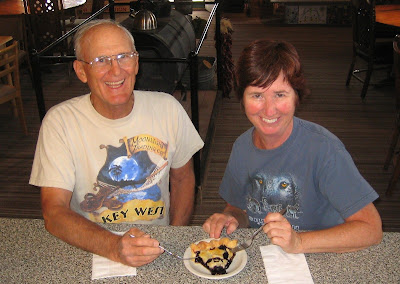 We stopped for a night at Datil Well National Recreation Area and, ignoring the threatening weather, took the lovely 3 mile loop hike. 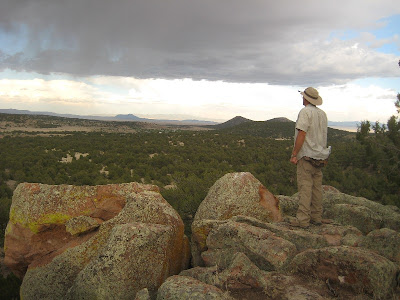 I was thrilled to see and get a shot of this guy. I think he's a horned toad, but correct me if you know better. Doesn't he look angry? 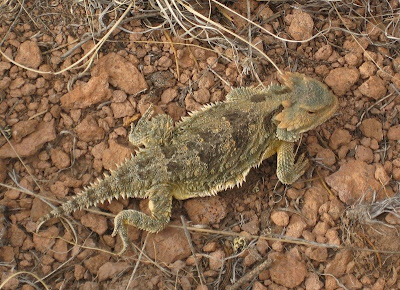 Continuing east the next morning, we stopped at the Very Large Array. They have a nice visitor center and a walking tour. It was much more interesting then I thought it would be. Contrary to the story line of the movie Contact, they are not listening to space, but seeing it with radio waves. The VLA consists of 27 dish-shaped antennas that are connected together to form a single large radio telescope. They are in a Y pattern and can be moved into different configurations using transporters on railroad tracks. In the smallest configuration the antenna are all crowded within .6 kilometers (2000 feet) of the array center. In the largest, they are spread out to 21 kilometers (13 miles) from the center. I would have loved to see the tightest configuration, but we weren't that lucky. Here's the best picture I took. 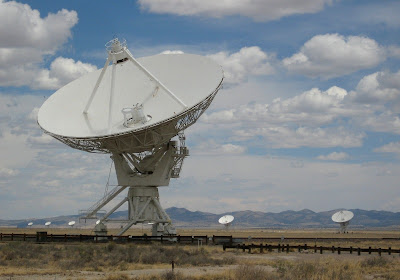 And here's the one in the visitors center that I would have liked to have taken. (Ignore that reflection of my flash.) 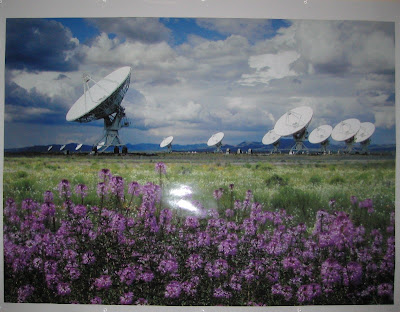 Each dish is 25 meters (82 feet) across. Ron was kind enough to pose for size. 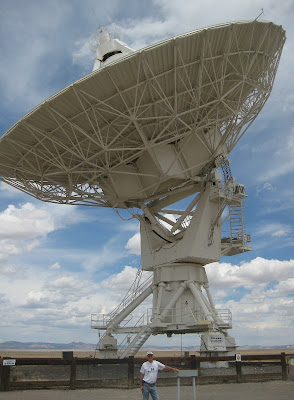 After the VLA, we passed through the town of Magdalena. Although we didn't stop, they do have a great hook. According to the visitor guide, the "Lady on the Mountain" is a natural rock formation that resembles the profile of Mary Magdalene. I just have to wonder, "Why not any woman?" and "How do they know what Mary Magdalene looked like?" Next time we'll have to stop.
Posted by Barbara and Ron at 11:10 PM