So we're in that tiny strip of Wisconsin famously known as Door County and have two days to see everything.  We decided to tackle it systematically and see the east side and north tip one day and the west side the other.  If I knew how people post those route maps, I'd do it.

First I have to say that Door County is not my favorite place.  Driving along the shore roads, all you can see are trees and glimpses of houses that are on Lake Michigan (east side), or Green Bay (west side).  The only places that have a view of the water are parks and town harbors.  Having said that, of course we did find interesting things to see.

The first stop was Whitefish Dunes State Park where we followed a trail through the trees to some nice viewpoints along the shoreline. 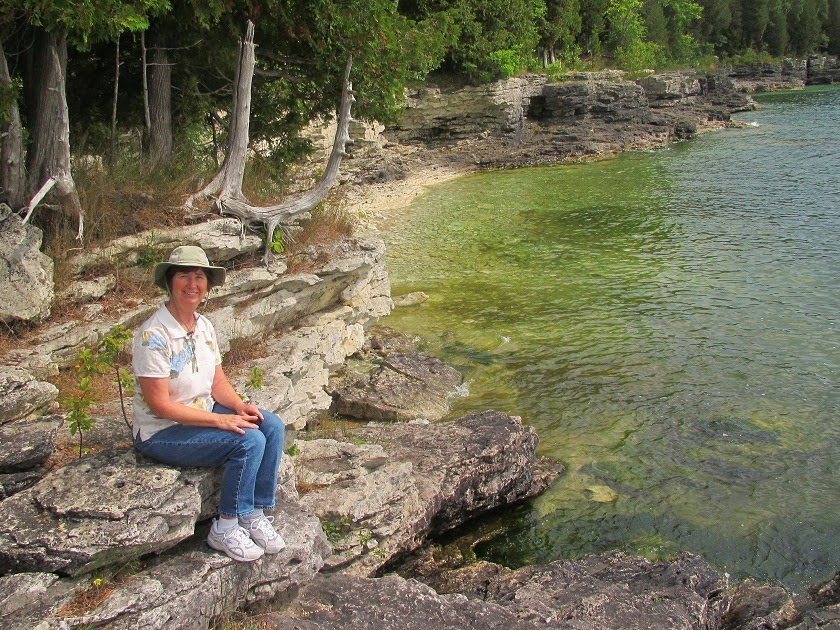 The wave action has undercut a lot of the limestone creating interesting gurgling sounds even on a calm day.  I wonder what it would be like during a storm. 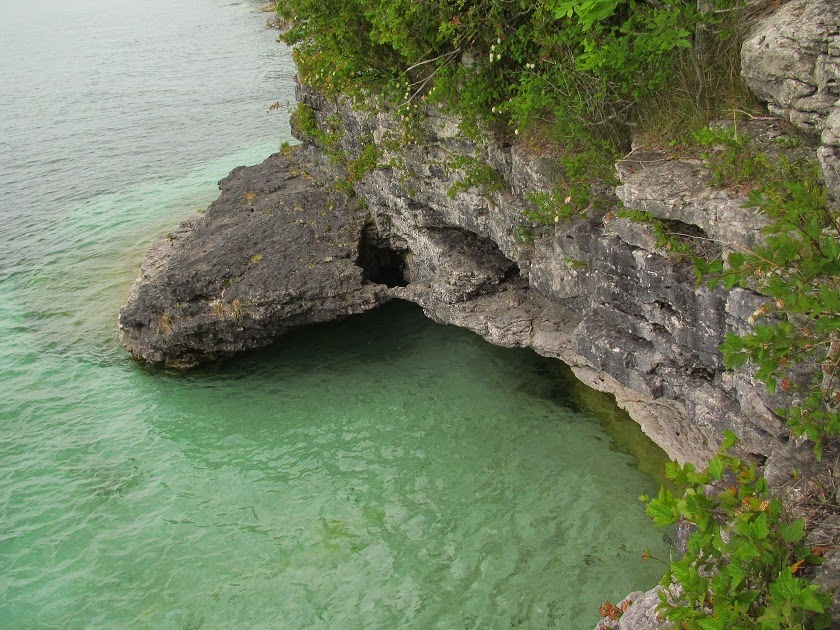 Take a good luck because soon we'll be back in the woods. 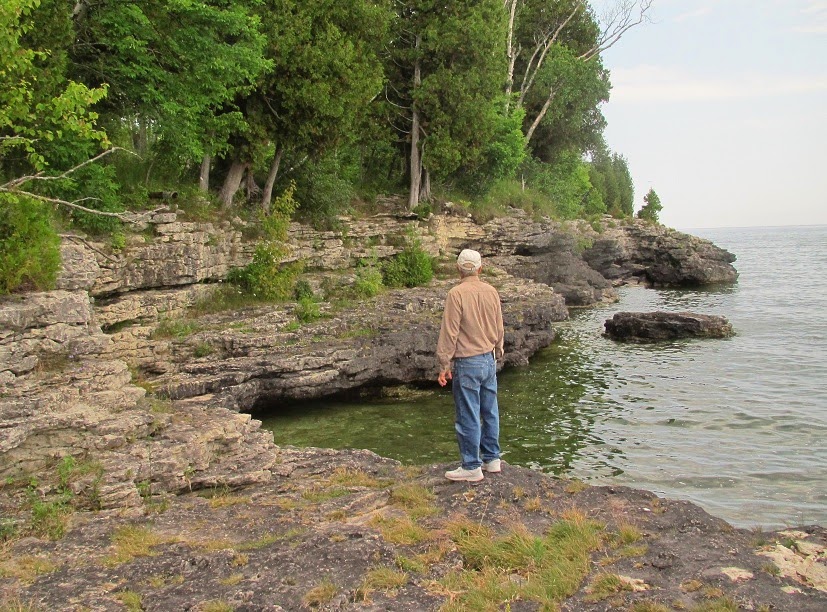 Then it was off to look for more of the 11 lighthouses.  The Baileys Harbor Rangelights were particularly interesting.  Consisting of lower (foreground) and upper (way in the background) lights, ships would line the pair up for safe entrance into the harbor. Here's the plaque on the lower light with more information. 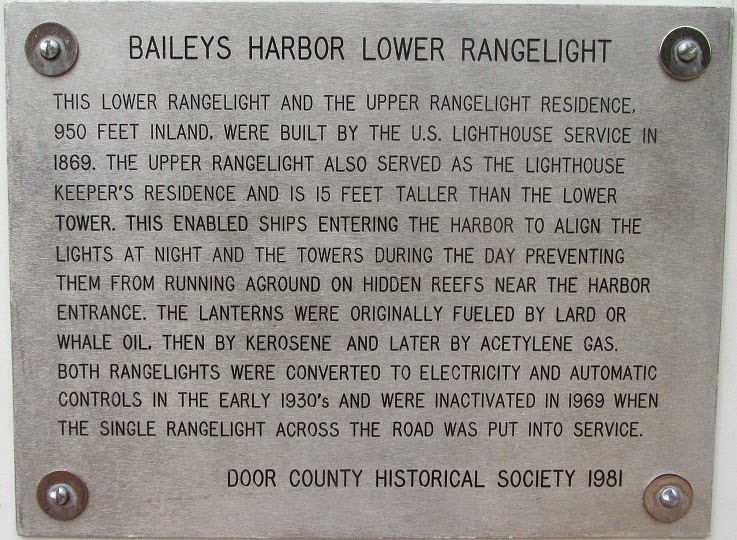 Some of the lighthouses were impossible to reach like the Old Baileys Harbor Light. 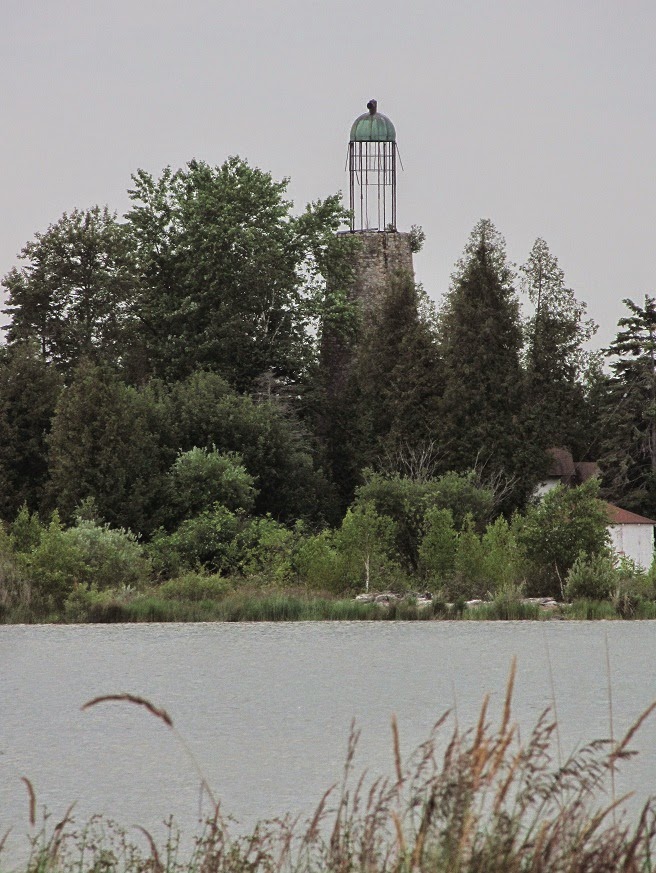 And the Cana Island Lighthouse charged money to get any closer than this.  I object to that on principle. 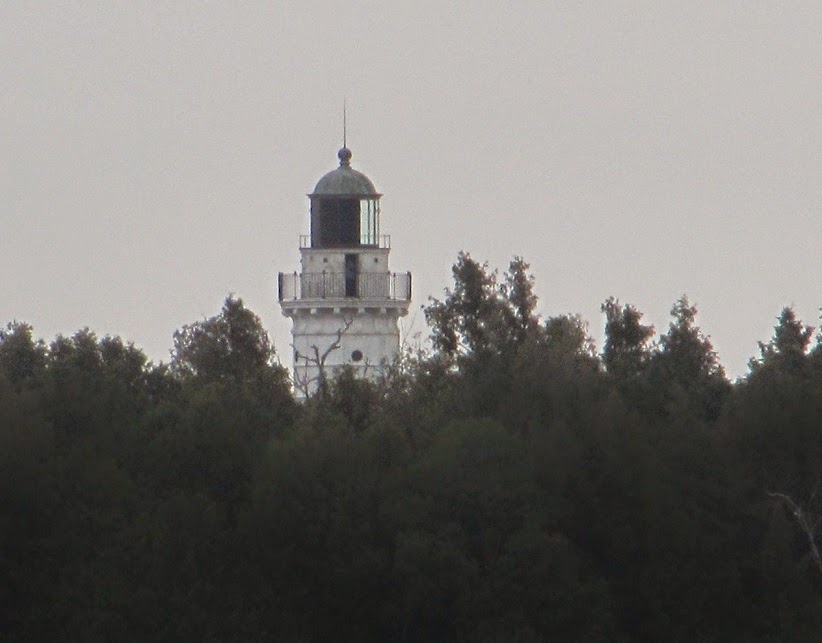 Next up was Sister Bay.  Is that a lighthouse? Nope, just a decoration. 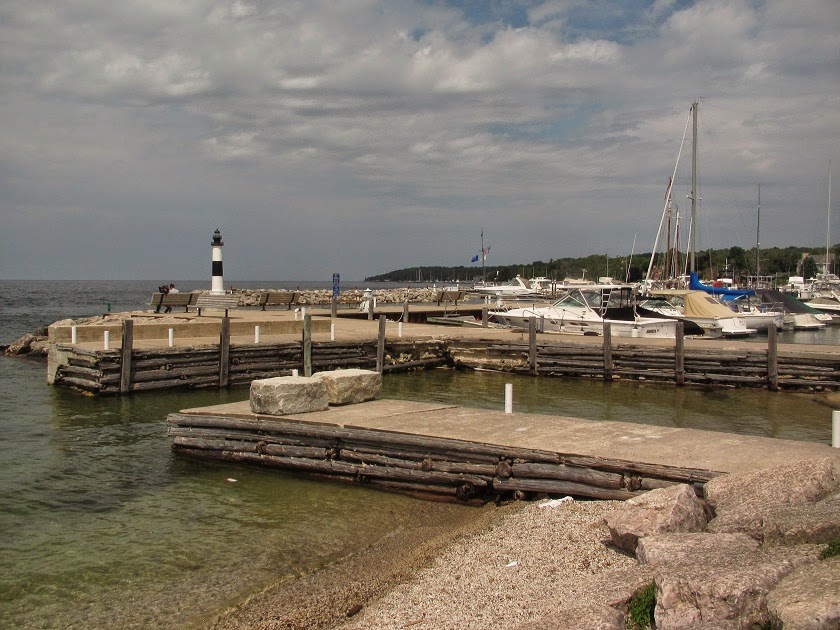 Sister Bay was packed with tourists, all here for one thing. 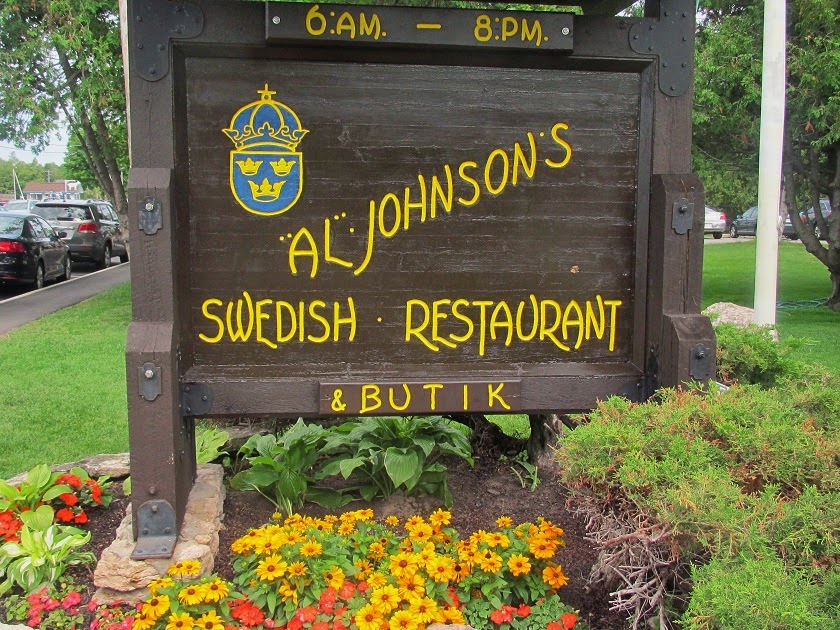 The restaurant is famous for their goats on the roof. 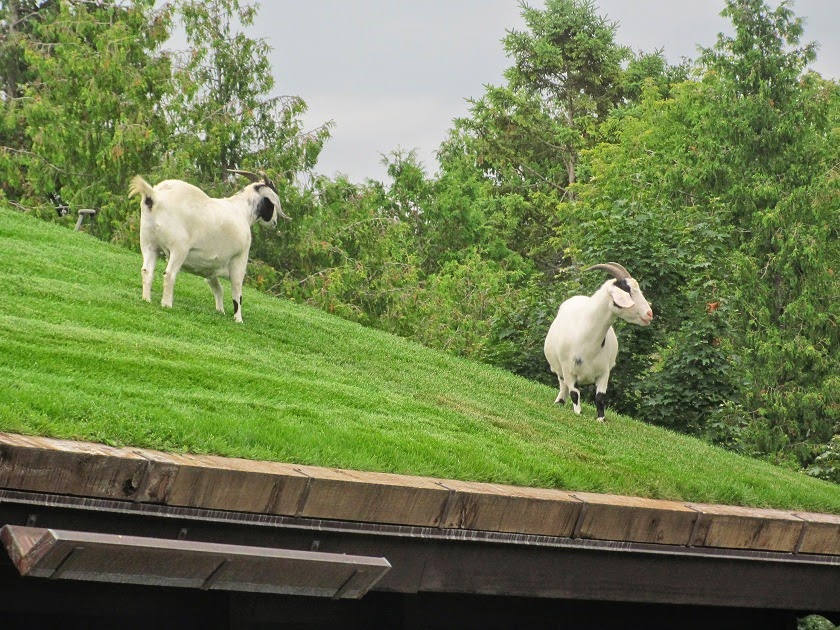 (I thought the grass looked fake, but they actually mow it because the goats don't eat it down uniformly.)

We waited an hour to be seated and had some delicious Swedish pancakes and meatballs.  The waitresses are all dressed appropriately. 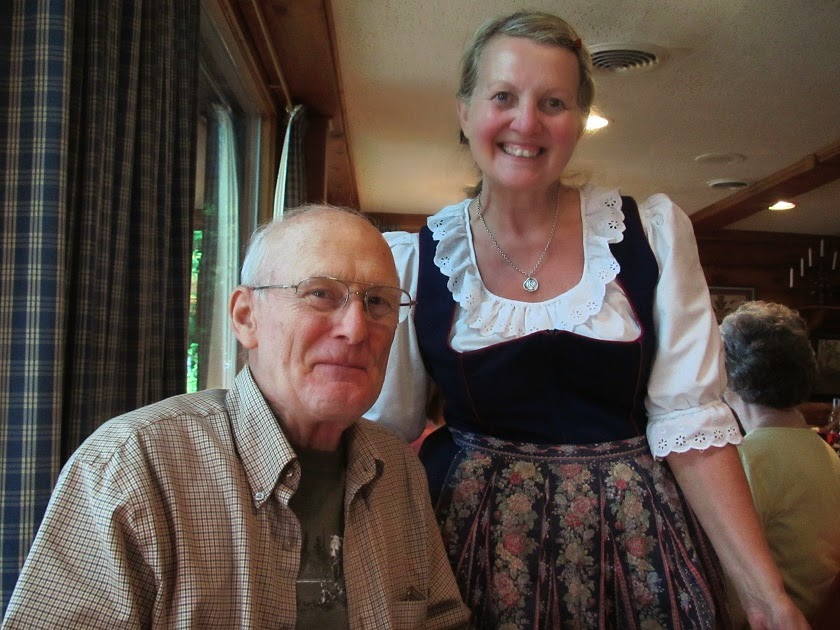 We continued north and followed a road that seemed like a joke - unbelievably crooked for no reason. 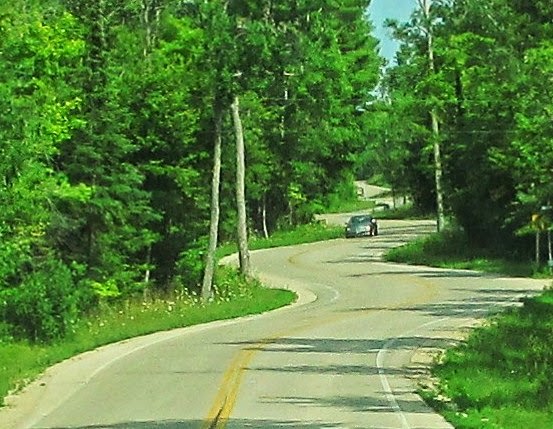 At the ferry dock, we looked across Porte des Morts Passage (even I can translate that as Death's Door.) I believe this is one of the Plum Island Rangelights. 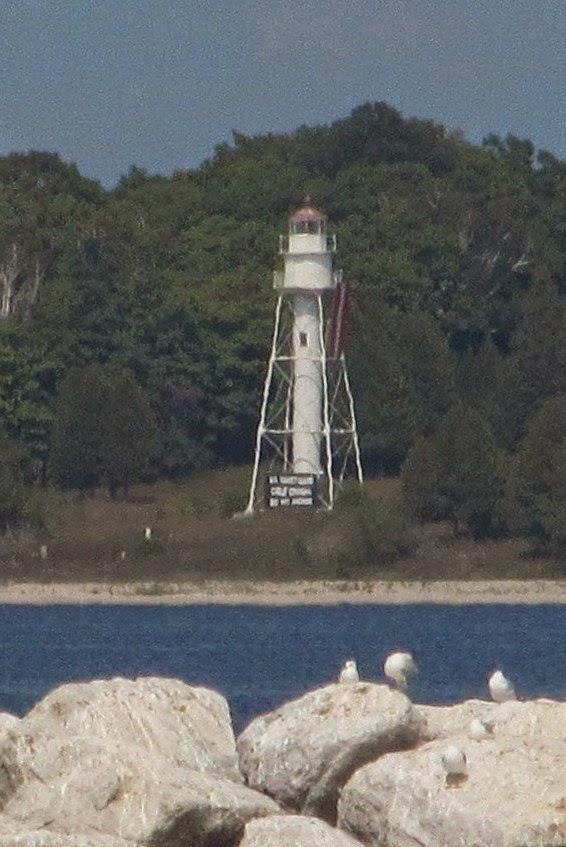 We could barely make out the Pilot Island Lighthouse in the distance. 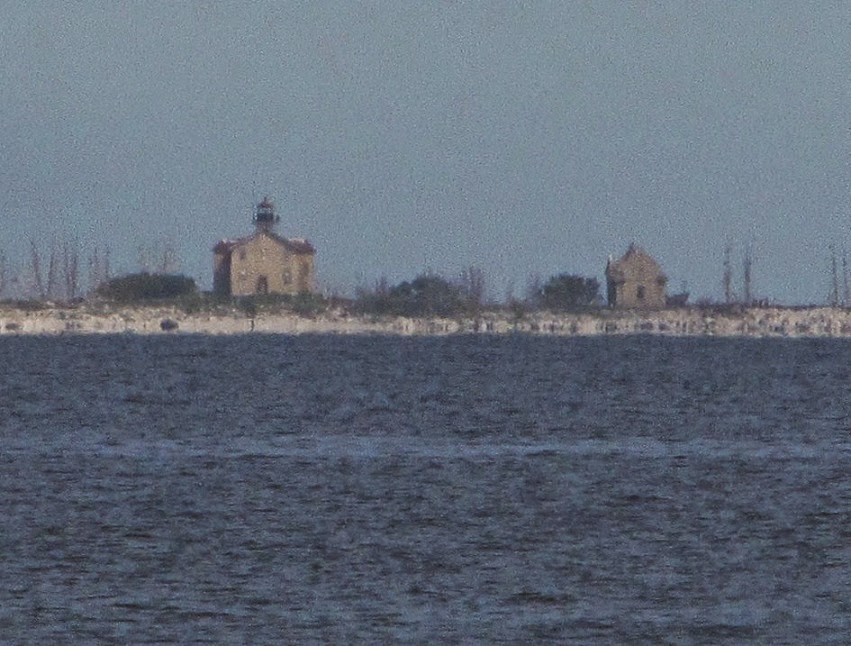 Look, Brenda, Bea's is still in business!  It's surprising the vice squad didn't shut her down years ago. 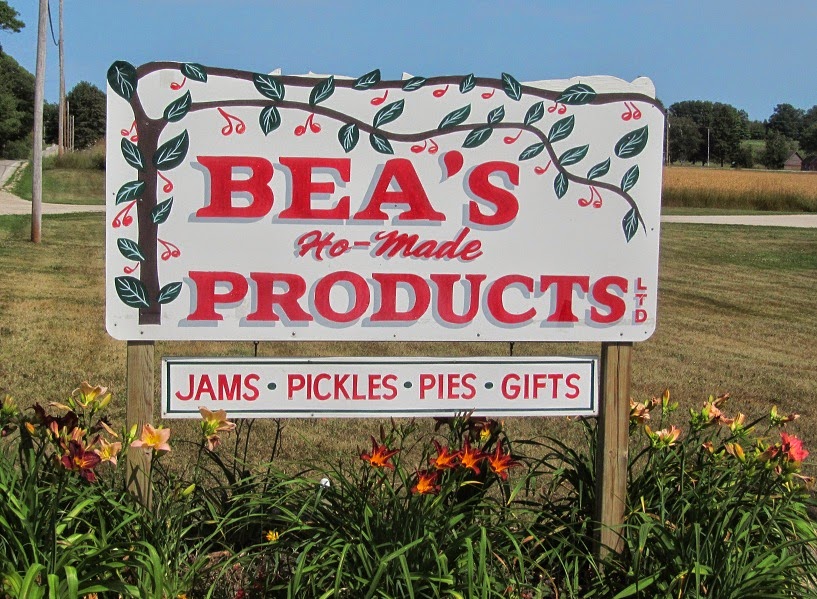 On our way back south, we found this unique chapel.  Located on the campus of Lawence University, the Boynton Chapel was built in the style of a late 12th century Norwegian stave church. 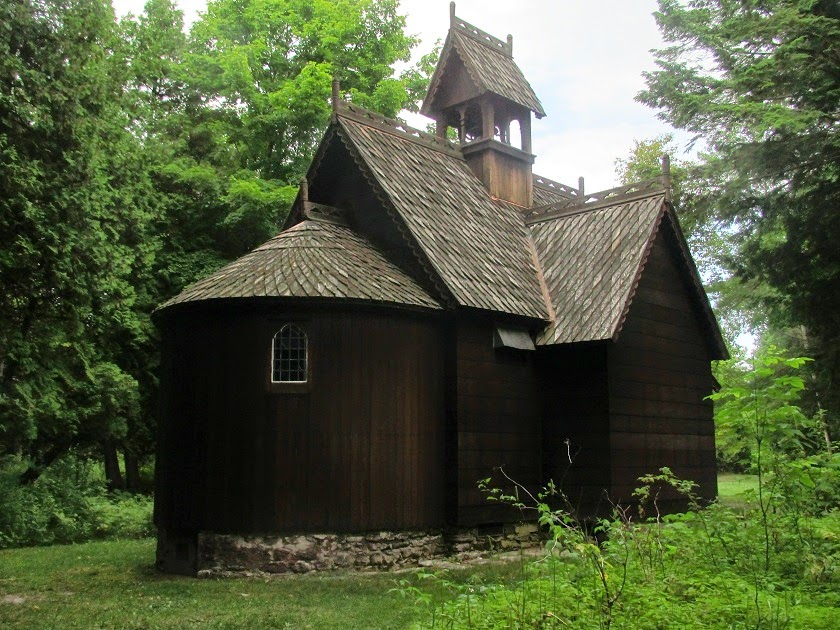 If we had been just a little earlier, we could have had a tour. 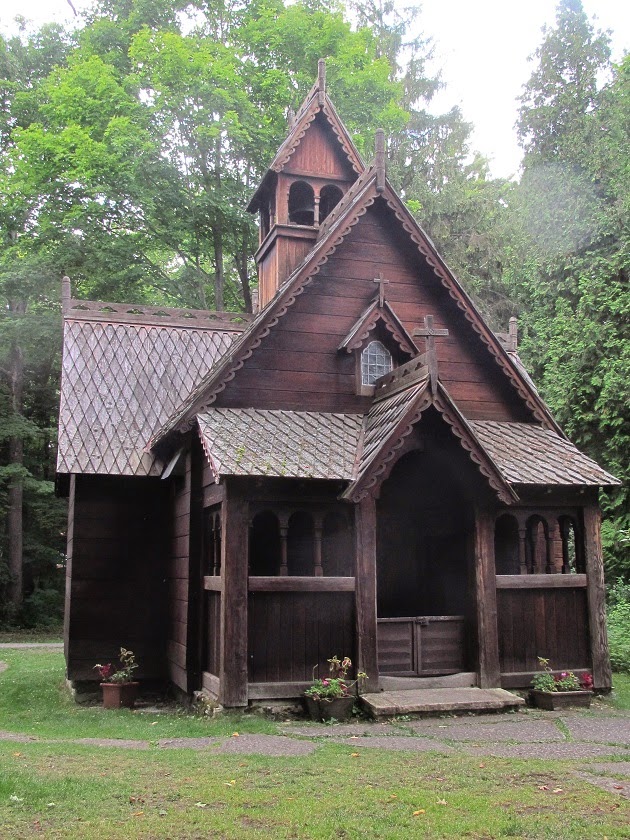