The House on the Rock

On previous visits to Wisconsin, I avoided stopping at the famous House on the Rock, thinking that it's just a tourist trap.  Finally, with Ron's encouragement, and since we were staying within a few miles, I agreed to go.

Driving in the entrance road, I was afraid my worst fears would be realized.  These giant planters with their weird critters just made me groan. 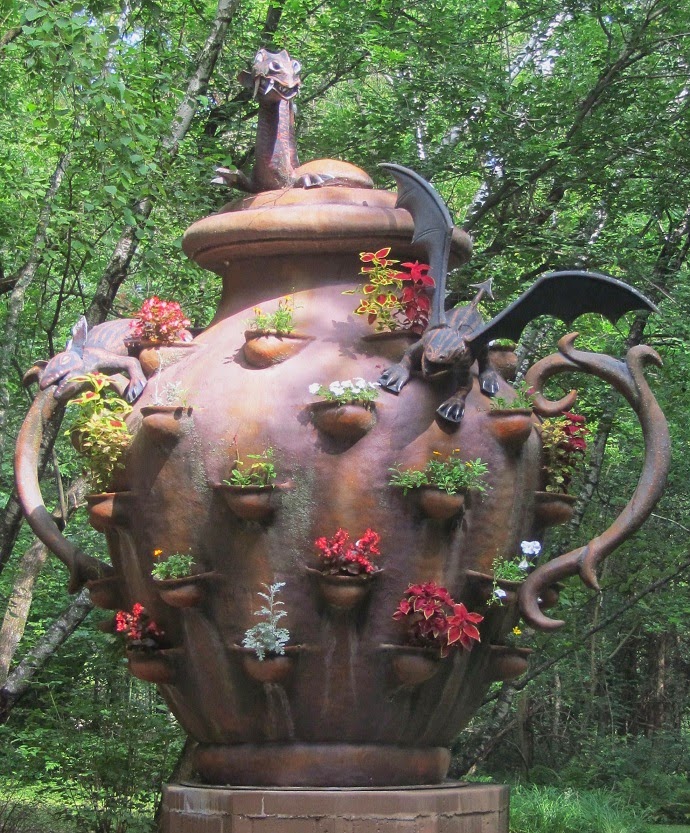 The House on the Rock was designed and built by Alex Jordan.  He started giving tours for 50 cents because people stopped to ask about the unusual house perched atop a rock pinnacle.  The trees must be a lot taller now because you can only see a small part of it from anywhere along the road.  It's also a lot more expensive now with the self-guided tour divided into three sections for $12.50 each, or all three for $28.50 ($26.50 for over 65.) Because we knew we would not be back, we went for the whole enchilada. 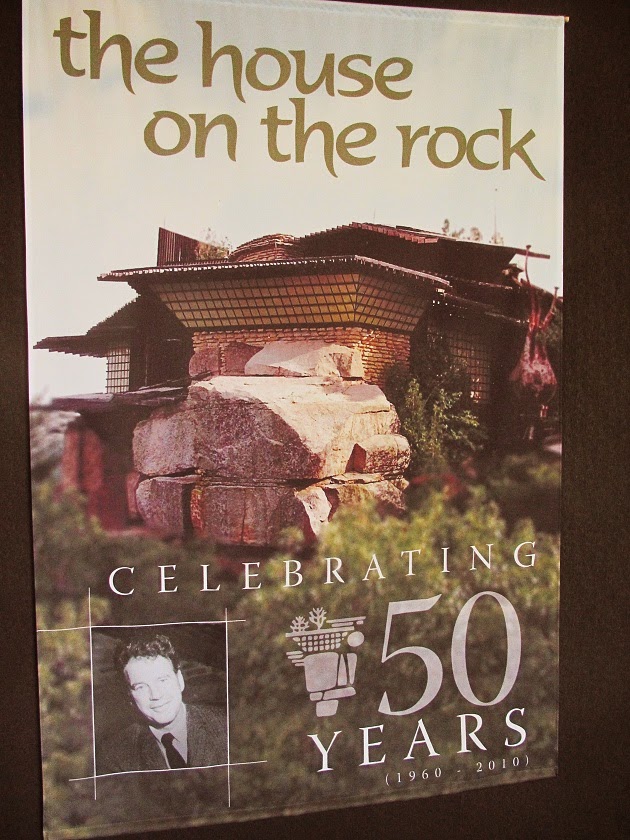 The first section of the tour includes the Alex Jordan Center and the house itself.  I warned Ron that if he read every sign in the center, we would never finish our tour.  I snapped this picture of the visitors center and the water flowing beneath it, framed by these cool shutters. 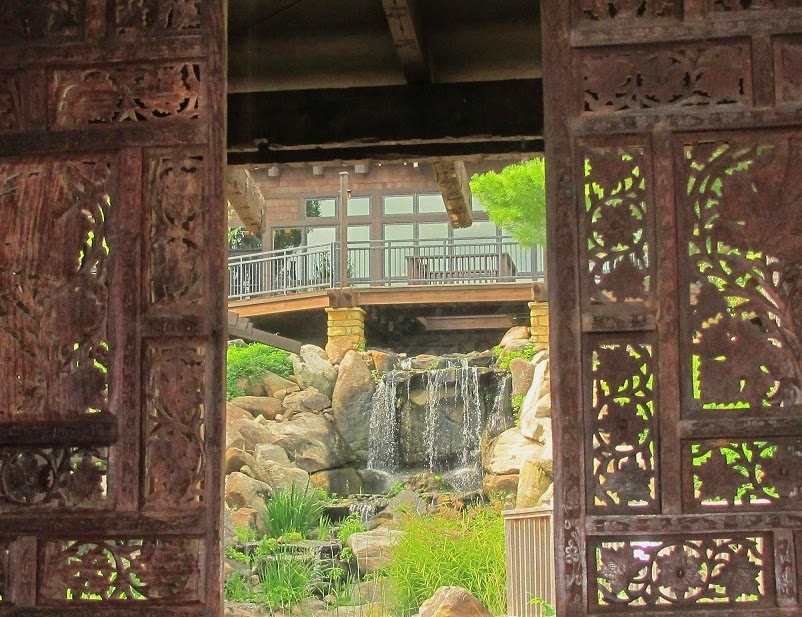 Then we were off to see the house.  The style is reminiscent of Frank Lloyd Wright and may have been inspired by his work.  On the other hand, it may have been a case of Mr. Jordan thumbing his nose at Wright.  The rooms have low-ceilings and are laid out in a maze-like way. 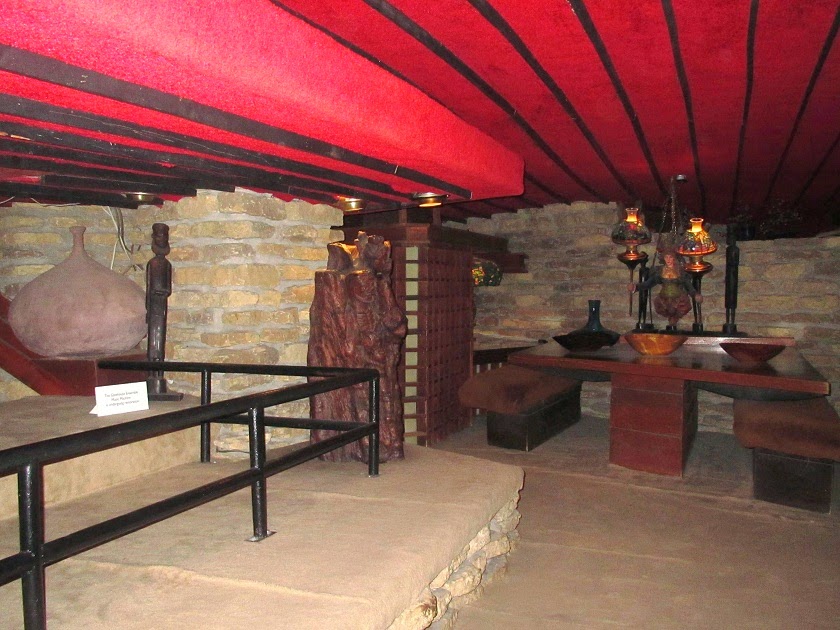 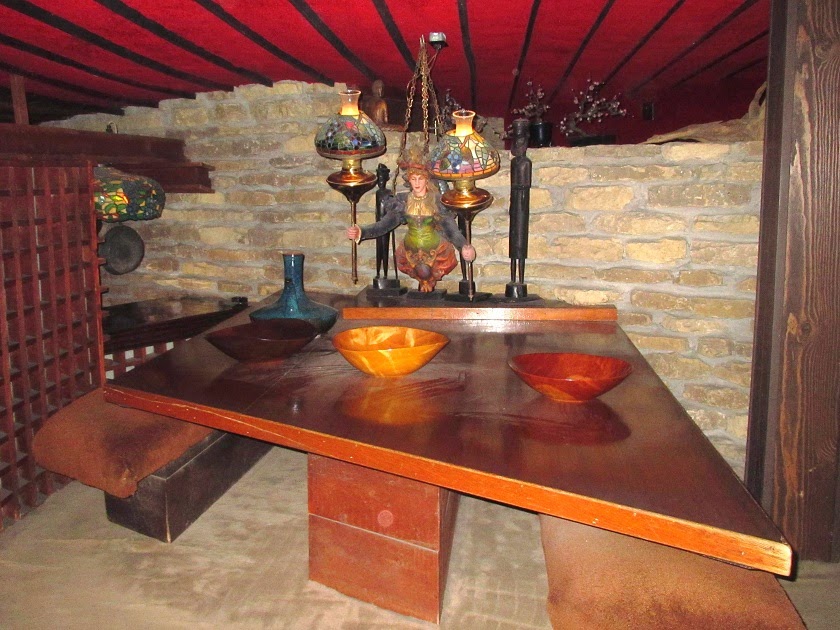 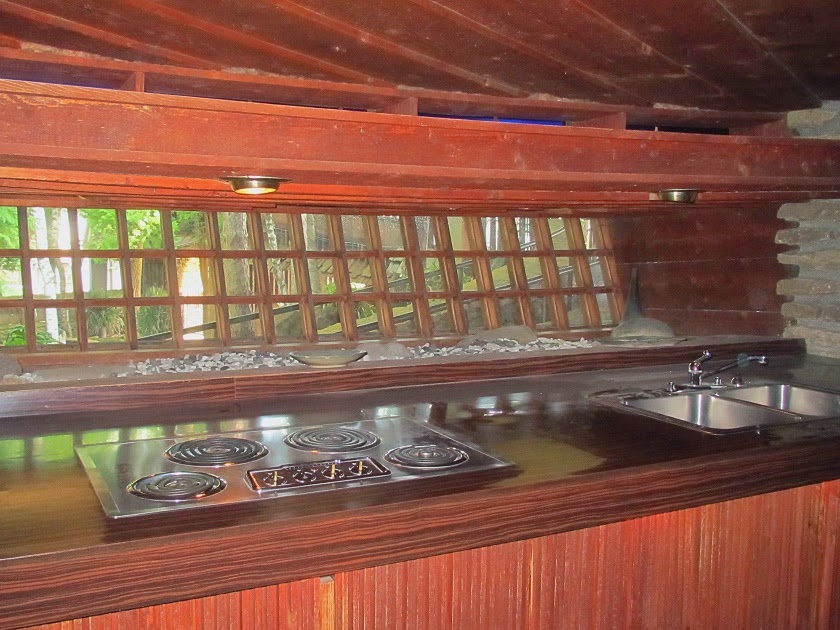 While crossing a connecting walkway, we had a nice view of the lovely Japanese garden. 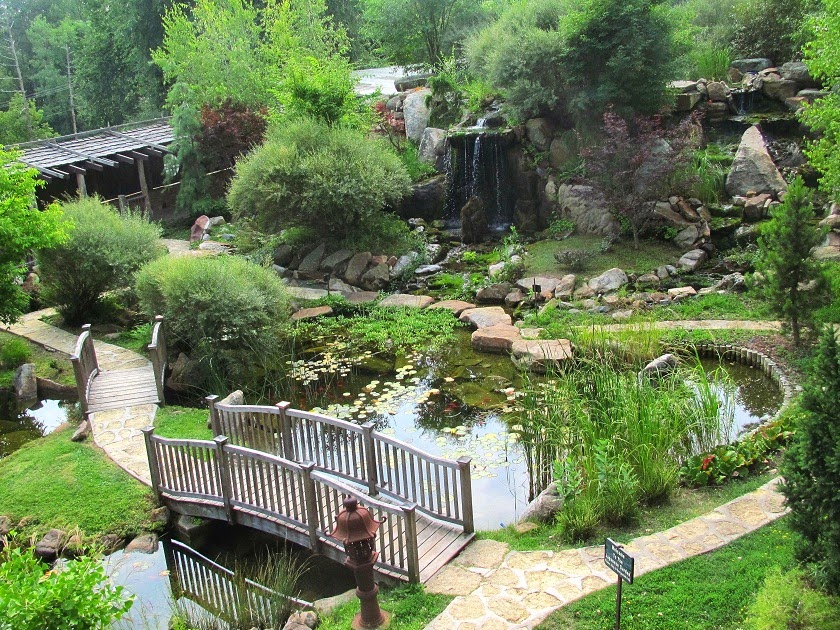 Then we entered another part of the house or was this the guest house?  We were confused by this time. 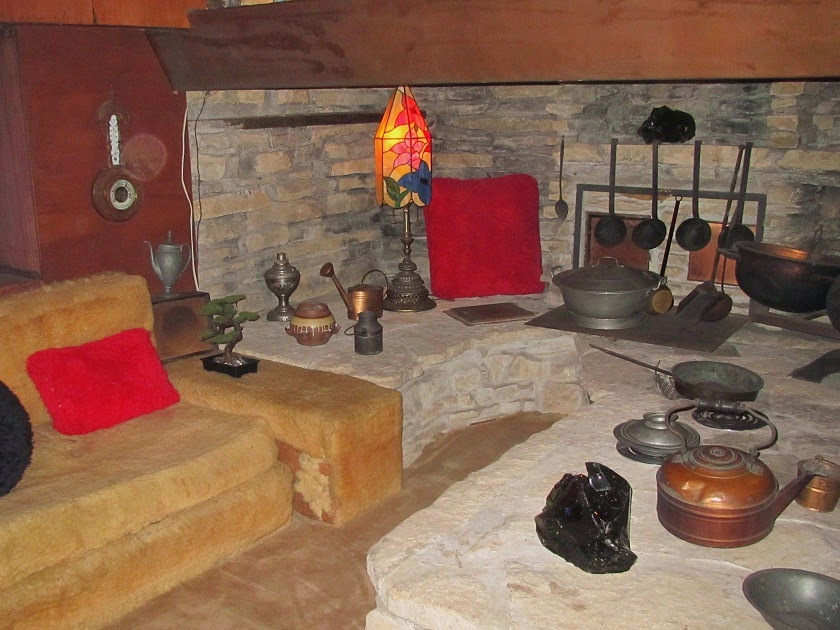 However, by far the most impressive piece of architecture is the Infinity Room. 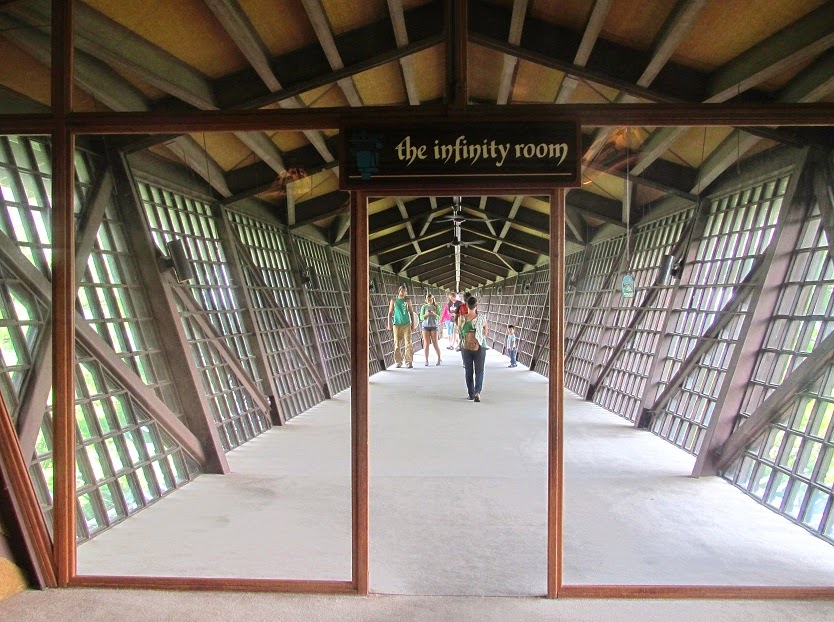 It extends 218 feet from the house with no support. 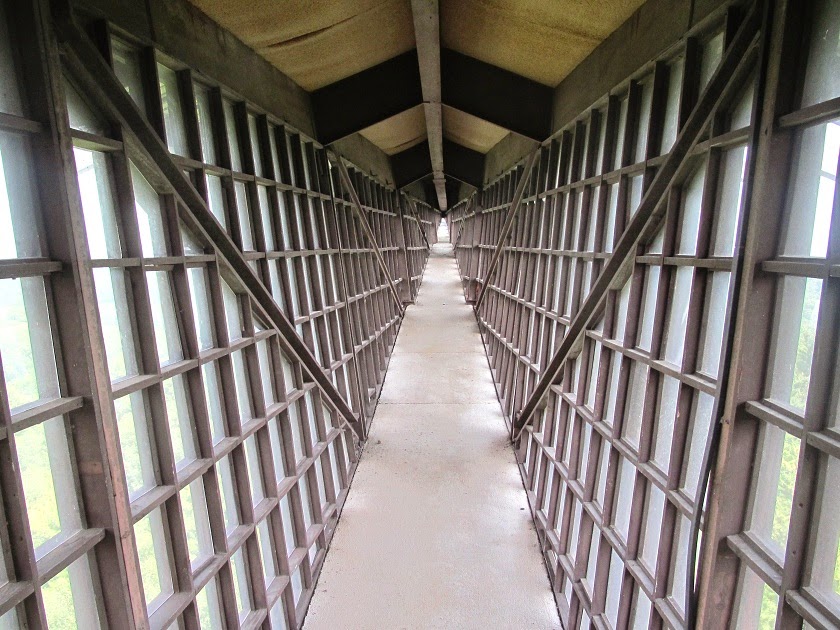 This is out of order, but here is a picture from the viewpoint about a mile up the road. 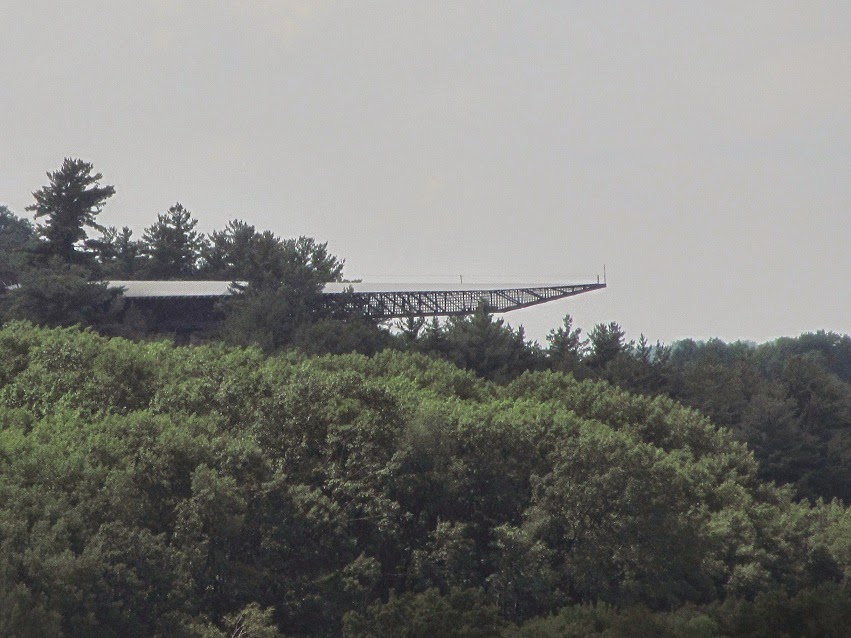 Continuing the house tour, we wandered through room after room, most of which appeared to be sitting areas. 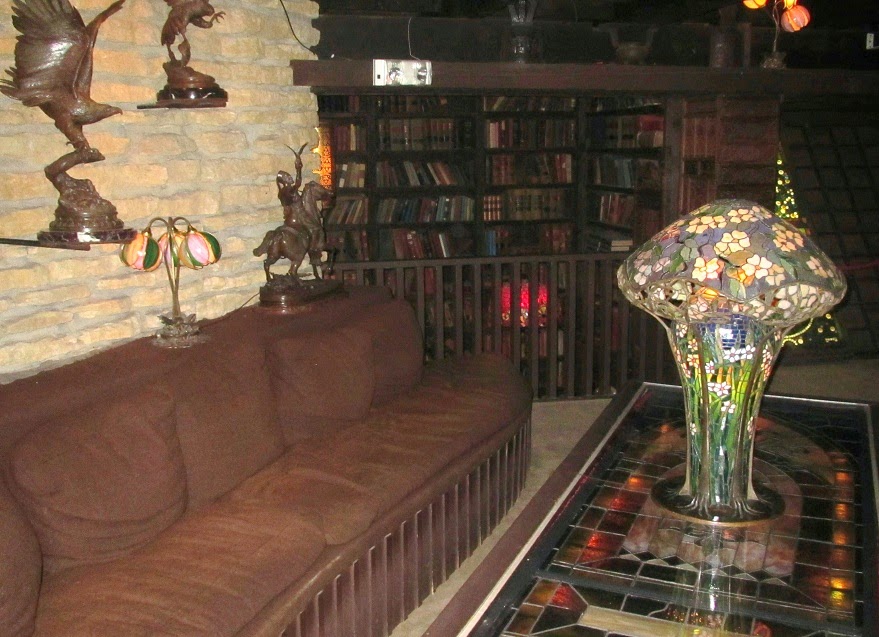 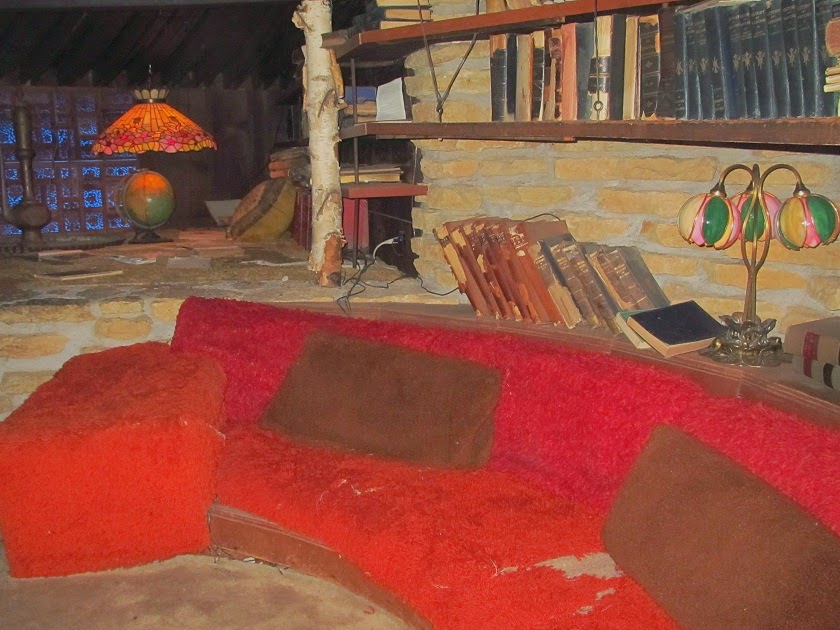 Heads spinning, we were soon out of the house and on our way to Section 2.  But that's another post. 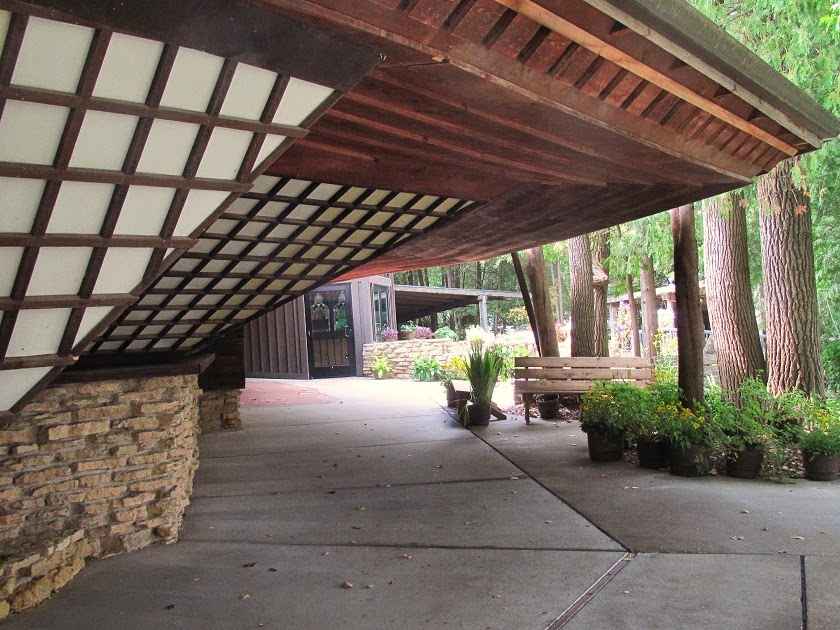