Love it or hate it. I do really love it and the fact that you can boondock with an awesome view, but I'm afraid it won't be that way for long. They are building a huge hotel and a new RV park with full hookups. You know what that means - no more boondocking. I'll be sorry to see that end, but I still won't hate it - that was just to get your attention.

I had to capture my first sight of Monument Valley as we drove in last Thursday. (This is another shot out the front window.)

The entrance fee was $5 each and $10 to 'primitive camp' in what is basically a parking lot with a few picnic tables and fire rings. Great for us! Especially since we could park facing the nearby 'mittens' formations. The West Mitten seemed to fill our windshield but was really about a mile away. We immediately took the Wildcat hike which left from our camping area and was three miles around the West Mitten. Everything was going really well until about mile two when the wind started blowing. And it blew! All the rest of the day and into the night. Even with all the windows shut, we have grit everywhere.

At sunset, I drove up the road a bit and got this of the West and East Mittens (why not left and right?) and nearby Merrick Butte. I guess it would be clearer if there wasn't all that sand blowing around.

As I was turning away to leave, I noticed Mitchell Butte was looking pretty fine. 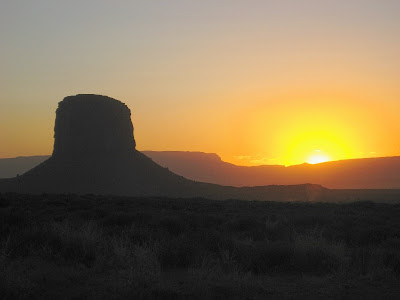 Get ready to be amazed! The next morning, I got up before dawn to watch the sunrise. Although I guess I shouldn't be too impressed with myself since it came up about 7:20 - not exactly the wee hours. I did step outside instead of taking this out the front window, but this was our view. 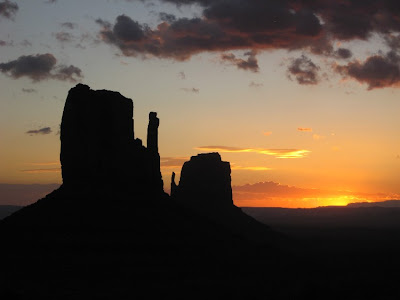 And remembering my lesson from the night before, I took this out the side window just as the sun hit. 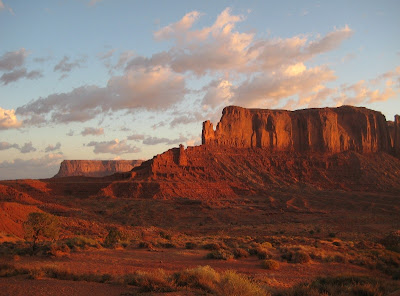 Although everyone tried to talk us out of it, we decided to take the Saturn on the loop road. We figured if the road was too bad, we would just turn around. We did learn that the worst part was at the beginning, so once we crawled over that part, we felt pretty confident. I always forget how funny we must look in certain locations. I thought people were looking at us because we took a car with 2 inches of clearance on a high clearance road, but maybe it was the kayaks. Ya think? 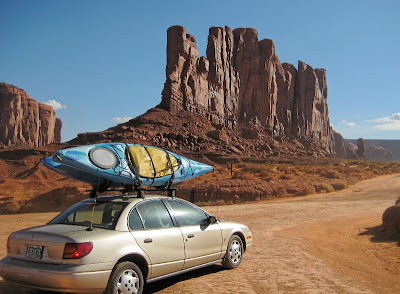 This is John Ford's Point (the famous western movie director.) For a small fee, a local will pose out on the point with his horse. It would make a cute picture, but it's a nice view even without him. 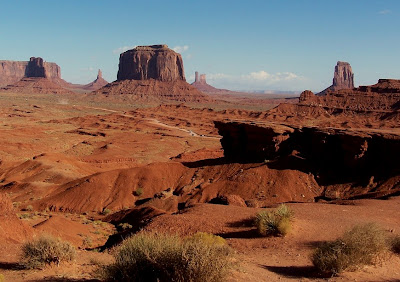 About halfway around the loop, the wind picked up again and the rest of the pictures are pretty hazy.

Once again the wind blew and blew - the rest of the day and all night this time. The next morning we decided to get out of that sandy parking area and moved 22 miles south to Kayenta. The Burger King in Kayenta has a very nice display on the Navajo Code Talkers who were so important to our efforts during World War II. I knew Ron would be interested and they also have a huge lot for RV and truck parking. Since the wind was still bad after lunch, I suggested that we stay the night and even had an idea for the afternoon. About 20 miles west of Kayenta and 10 miles north is Navajo National Monument. The monument protects three of the largest cliff dwellings of the Ancestral Puebloan people. It's really something to see and once again I knew Ron would be interested. So I sent him off with instructions to take pictures, not remembering how impossible a task that is.

This dwelling, called Betatakin, is bigger than you can imagine from a photo. Because of the sun's angle, I had to lighten it and if you click on it, you might be able to see some of the structures inside the shadow. Good luck. 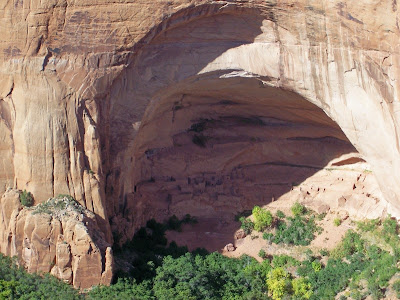 This morning the wind was still blowing and, although I was against driving in 60 mph gusts, Ron was chomping at the bit. So we moved 125 miles east to Farmington, New Mexico where the wind finally died down about 8 this evening. Whew! I can see why the pioneers went crazy from the wind. At least I think I heard that someplace.
Posted by Barbara and Ron at 4:23 PM