As I reported in my last post, we are parked on BLM land outside of the Needles section of Canyonlands and have been having some terrible weather. Saturday and Sunday were both really c-c-cold and rainy. I didn't think they had rain around here. It looks pretty dry.

Yesterday was Sunday and those of you who know Ron know what that means - Sunday breakfast. Since we are not exactly in a town, we drove 17 miles south to Monticello where they have a nice restaurant. I had been there years ago (about 12) and it was a quaint family business. The dad cooked, mom waited tables, and the kids bussed. I didn't ask if it still was owned by the same people, but if so, the kids have grown.

Their menu had the following picture accompanying a sweet legend about a horse named Bally who was accidentally killed on this mountain. He was all black with a white face. Do you see him in the picture? 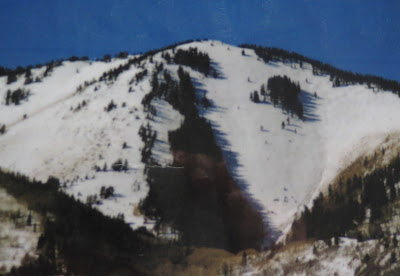 If you don't, don't feel badly. Ron and I didn't see it either. Once the waitress pointed it out, it became obvious. The main black part is his neck, the white is his face with one eye, and you can even see his ears. (I guess his other eye is in the black part since the legend didn't say anything about him being one-eyed.)

After a delicious meal, we decided we couldn't just sit around another day and wait for it to clear up, so we drove out to Needles Overlook - ten miles north of the road we're parked on and 22 miles west. When we reached the end of the road, we discovered that not only were the clouds above us, they were also below! 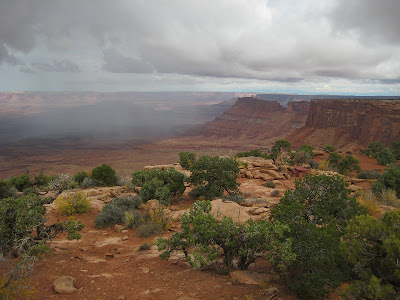 It was quite a view even with the clouds. Something this vast can't be captured with my little camera. 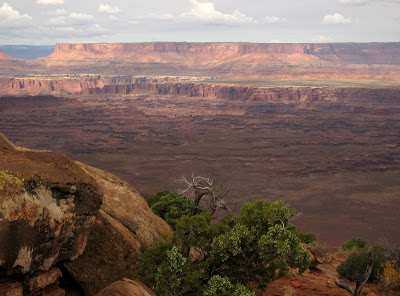 When we arrived home, the RV was momentarily in the sun, but more storms were on the way. 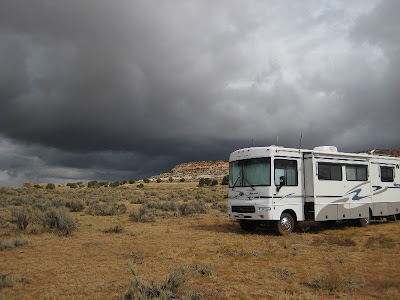 But today we awoke to a beautiful, sunny day. Canyonlands has some lovely hikes through the Needles district - one of the most popular is to Chesler Park. Although it's 5.8 miles round trip, I was up for it. Ron never needs encouragement to hike, so off we went. After an initial climb from the parking lot, the trail isn't too strenuous as it passes colorful formations that give the area its name. I don't usually see objects in the rocks, but I did think the one on the left looked like a dog. 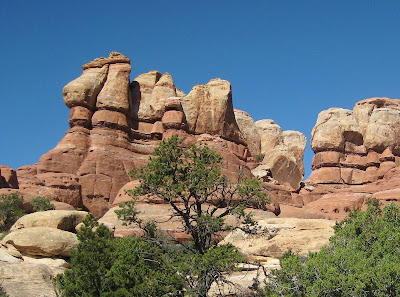 Here's Ron waiting patiently for me (as usual.) I'm okay as long as I don't have to go up or down a hill or see a photo op. 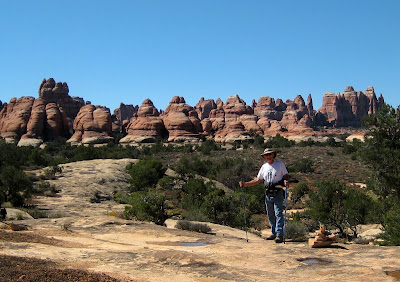 We climbed down into Elephant Canyon and back up the other side. 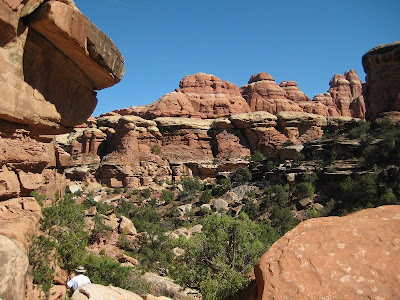 And we went through this slot canyon - pretty exciting. 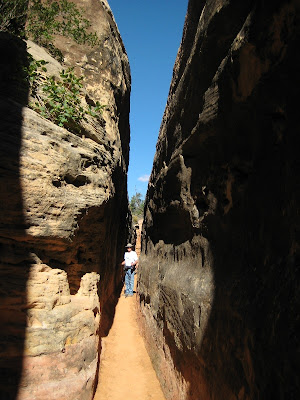 Just before the last 2/10 of a mile, we reached a place that just blew me away. The formations were all around us and incredibly beautiful. I took a movie to post here, but when I got home I discovered that all I got were my feet! And to make it worse, I was so involved in taking the movie that I didn't get any pictures. You'll just have to go see it yourself!

Warning - one of those last 2/10 of a mile was straight uphill. We figured we had come this far, we should climb up to see the hike destination - Chesler Park. We were disappointed. I know that's terrible of me to say, but it was much prettier before that last 2/10. However it was a nice spot for our lunch. 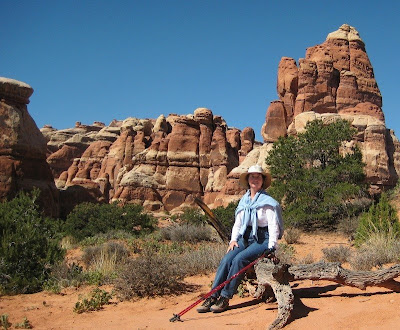