We spent the last couple of days exploring a couple of national monuments in northwest New Mexico. We, and probably a lot of others, have passed close by these parks many times without stopping and thought it was time to check them out. Like I always say, there's a reason these places are designated as national parks (or monuments.)

El Morro, Spanish for The Headland or Bluff, is a cuesta - a long formation with a gentle upward slope that drops off abruptly at one end. This is that end. If you look closely at the lower right, you can see some hand and foot holds left by the ancestors of the local Zuni Indians 700 years ago. 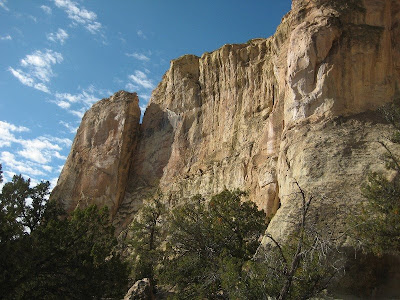 Okay, maybe a closer shot would be easier. The ranger in the visitor center told us where to look. His directions were something about to the left of the big tree. Humm. 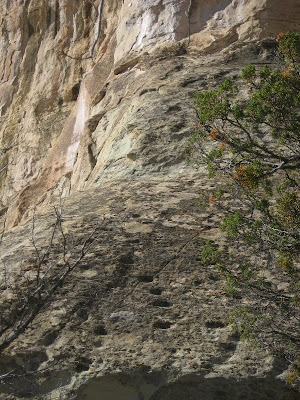 El Morro was visited by many travelers over the course of several centuries and this pool is the reason. It is filled with rainfall and snow melt, never goes dry, and holds 200,000 gallons of water when full. (It's hard to capture in a picture - I like this one of Ron's better than mine.) 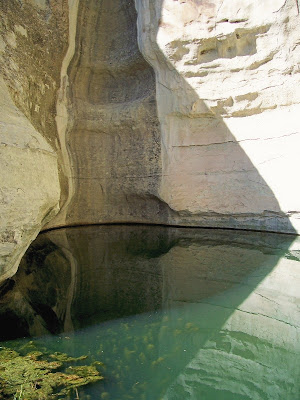 El Morro is also called Inscription Rock because of the many carvings. I thought it was fascinating to see signs of people of various centuries mixed together. Here is a petroglyph of bighorn sheep from the 13th century right under a Spanish inscription from the 17th. 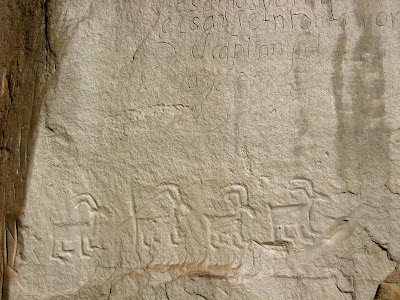 A lot of history is recorded here. This carving from 1692, documents the reconquest of New Mexico after a revolt in 1680. 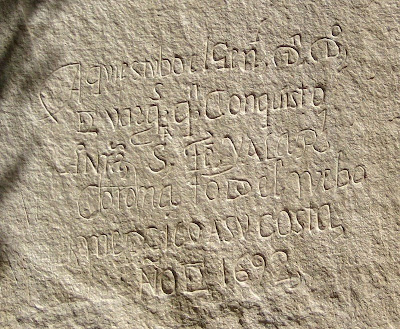 In 1849, two of the U.S. Army's topographical engineers recognized the value of the inscriptions and copied them for posterity. I wonder what happened to the copies. 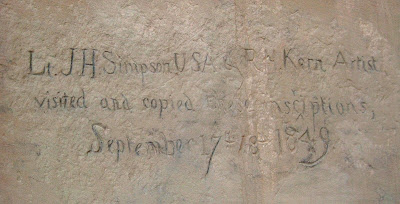 Others who left their mark included emigrants to California, Union Pacific railroad surveyors, and an Army caravan conducting an experiment to use camels in the Southwest desert.

Ron and I continued along the trail as it wound its way up to the top of the cuesta where we could view this lovely box canyon. 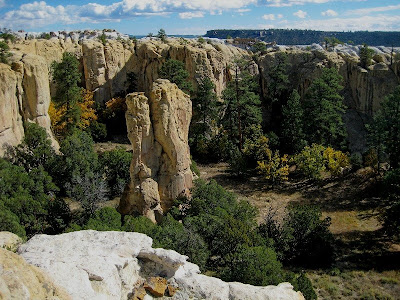 It looked so pretty and green, that I wondered if the Zuni Indians had lived in the canyon. But once we worked our way around the canyon we came to Atsinna Ruins. Although only a small portion has been excavated from the years of covering dirt, Atsinna had more than 850 rooms! They had quite a view from up there. 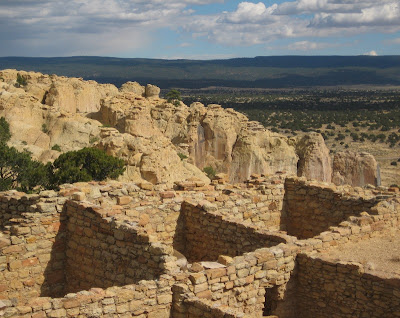 We stayed in the cute little campground in the park, only nine spaces and we were in the only one level enough for a motor home. But that one space couldn't have been nicer. 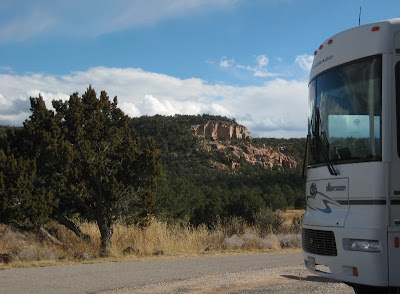 We also visited nearby El Malpais, which you can probably guess means The Badlands. It seems this area has had multiple volcanic eruptions, the last one only 2000 years ago. I wasn't about to walk through this section of a lava tube, but as I stated before, Ron is surefooted as a goat. 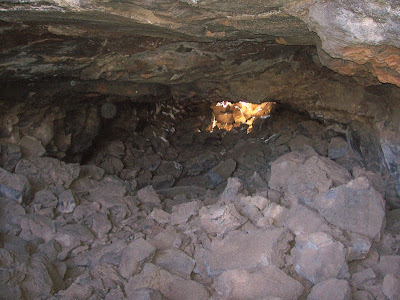 In almost the time it took me to walk the overland route, he scrambled over all those rocks. Here he is climbing out the other end. 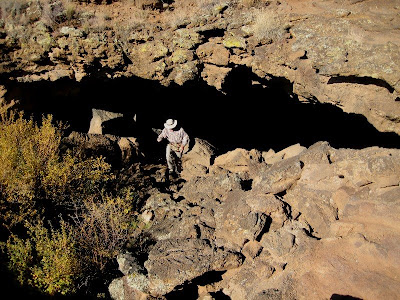 We also saw lots of collapsed lava tubes and hiked to El Calderon, a large cinder cone that erupted twice - once with black lava and once with red. It was too big for a picture, but we liked the red bushes mixed in with the lava. It looked like they were on fire from the heat. 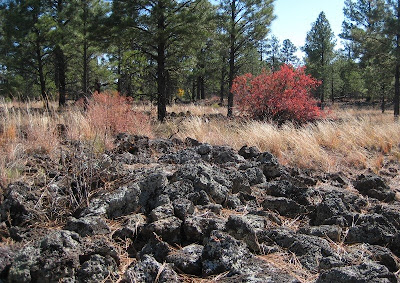