Or maybe I should say 'the other side.' The east entrance to Mt. St. Helens is less accessible and therefore not as popular. That's unfortunate because, in my opinion, it's much more interesting. Although the west side has that lovely observatory and the view of the Toutle River valley, the east has been left to recover on its own. You see the three distinct areas of devastation, created by the May 1980 horizontal blast from Mt. St. Helens.

After driving along a twisty road through beautiful old growth forest, you turn a corner and there it is - the scorch zone. In this first zone, which extends up to 17 miles from the volcano, the trees were instantly killed by a cloud of hot air and fine ash. You can see these ghost trees still standing after 31 years and the new growth since then. 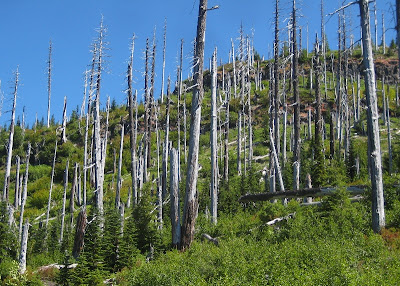 Next is the blowdown zone from 7.5 to 15.5 miles from the mountain. In this area, the trees were snapped off and lie pointing in the direction of the blast. 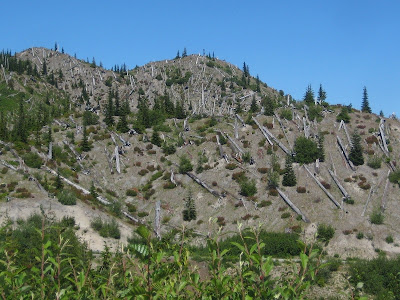 In the closest zone to the mountain, the tree removal zone, the trees were actually ripped out of the ground, roots and all. I was confused because there isn't much debris in that area, but the ranger told us these trees were not just ripped out of the ground, but were blown for miles. Sure enough, we did see them in the other zones, but I didn't get a good picture. Just imagine giant trees flying through the air!

You also get a nice view of Spirit Lake, which rose 800 feet in a tidal wave effect when the north side of the Mt. St. Helens collapsed into it. That snapped off all the trees on the surrounding hills and carried the logs back to the surface of the lake. Although a lot have since sunk to the bottom, you can see all the logs that remain floating to this day. 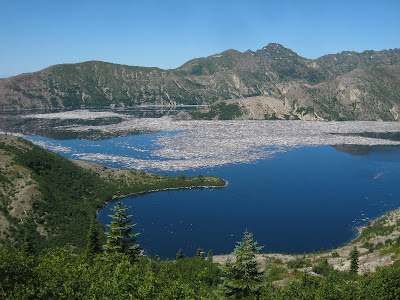 At the end of the road is a parking lot with a ranger who gives an informative talk and answers questions. That doesn't sound like much, but he was very good. But for those who just have to do more, there are 368 steps to the top of Windy Ridge.

The flowers weren't quite as magnificent as on the other side, but there were some nice patches. Here's nearby Mt. Adams as seen from about half way up the steps. 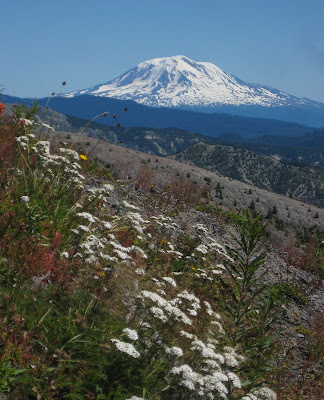 For those of you who don't want that much of a workout, I'll be honest. It isn't worth it. You get a view of Spirit Lake which isn't as good as the one from the viewpoint along the road. And you see Mt. St. Helens from 200 feet higher than at the bottom of the steps. It's just for bragging rights.

Here's the lady herself. But wait! What's that I see? 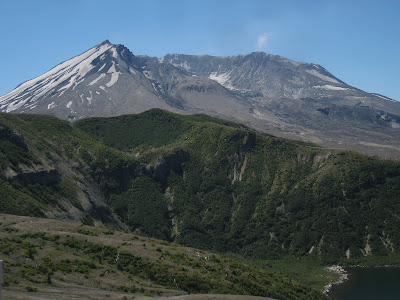 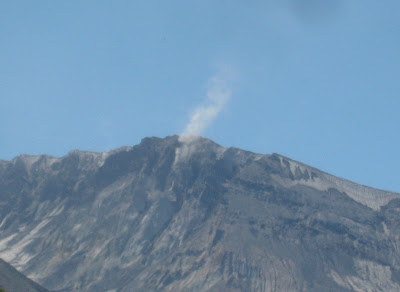 That's a lot of steps to run down. 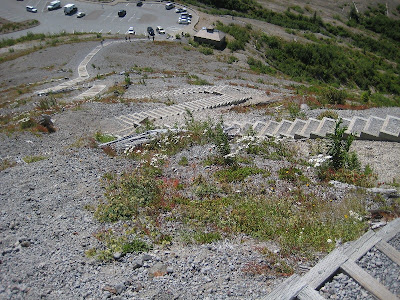 Before you ask, that was just blowing ash coming off the edge of the mountain. Although it does put out steam at times, that would come from the center.

Speaking of steam, here are a couple of steam engine pictures for my father. 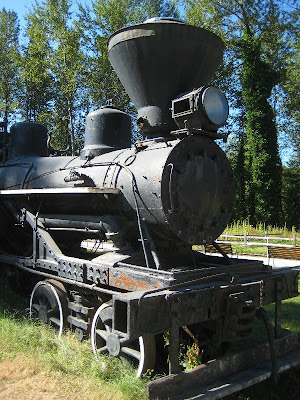 We found it in Elbe, WA, and I had to stand in the street to get the picture, so I couldn't get the whole thing in. Looks old. 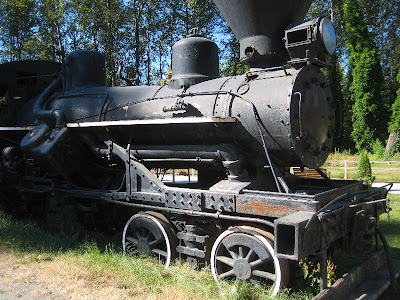 And in the 'what the heck' category, I want to know who rides in the lawn chairs? 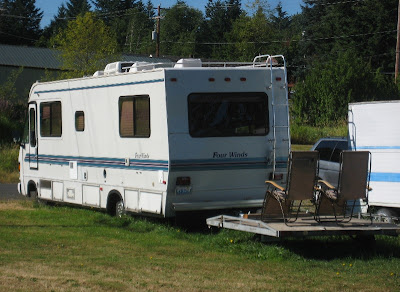