As I mentioned in the previous post, we stopped in Silverton mainly to visit nearby Silver Falls SP. The Silverton Elks kindly allowed us to park for two nights, even though their parking lot was minimal. Although we really appreciate their kindness, we don't recommend this spot to our fellow Elk RVers. We were right next to a busy corner with a four-way stop and the fumes gave us both a headache. Fair warning.

If not for that problem, we would have liked to stay longer. Silverton is another one of those cute Oregon towns and we were parked just a block off Main St. They have interesting murals all over town and we did a walking tour to see them.

This is my favorite.

On to the park which contains ten unique waterfalls that can be viewed via a trail along Silver Creek. I estimate the trail to be four to five miles and the best way for us to see everything would be to begin at the upper end and walk down stream. Unfortunately, we didn't have another car to leave at the lower end, so we stopped at different trailheads and climbed down to creek level and back up THREE times. But we did manage to see seven of the ten waterfalls.

This is the South Falls, the tallest single drop at 177 feet. The falls flow over basalt lava atop softer, older rock. This softer rock wears away creating pathways behind some of the falls. You can see little people on the path in this picture. 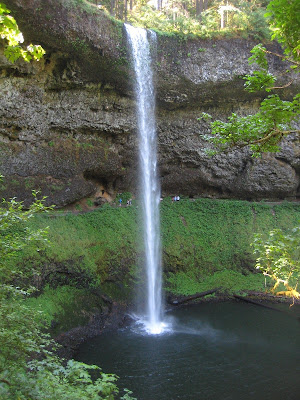 I think we might have become jaded with all the massive waterfalls we've seen. Although the height of this waterfall was impressive, Silver Creek, at least at this time of the year, doesn't have the shear volume of the McKenzie.

After walking behind the falls, looping down to the creek and back up, we headed for the next trailhead. Then it was down to the creek again where we wondered about this clearly over-constructed 3-foot bridge. Gorgeous, but how much weight did they plan on it holding? 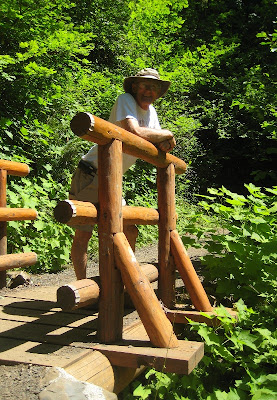 Ah, here's Middle North Falls. (Why not just Middle Falls?) We could get right next to this one, so it seemed more impressive and I really like all the greenery and the look of the lava walls.


On we went to Drake Falls, which was hidden behind some trees, but I was distracted by this flower. It looks like something in the pea family. 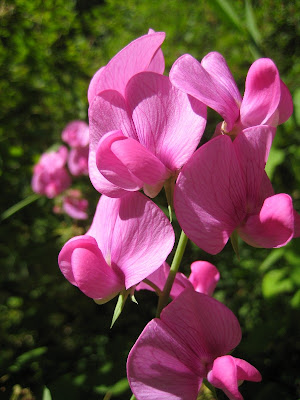 Next was Lower North Falls which was interesting because of how the water just shimmered along the rock. It would make a great waterslide - just watch out for those giant logs at the bottom. 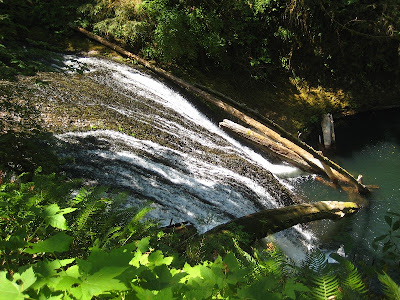 Ron and I decided to do the tourist picture in front of Double Falls. 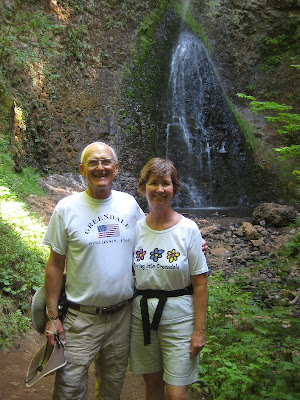 For sure we're not in the high desert anymore. Look at all the moss growing on this tree. 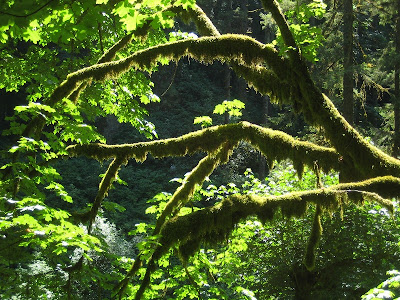 Finally we ended at North Falls with another hike down and up. I picked this picture to post because of the tree. The waterfall is 136 feet high and this tree extended way out of the picture. We estimated it had to be at least 180 feet, but what really amazed us was that it wasn't very big around. 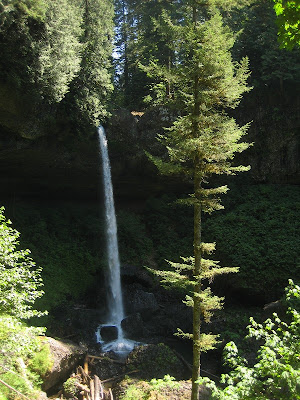 So what have we learned here? Go to Silver Falls State Park in the spring or early summer and take two cars. It is a special place especially for waterfall lovers.
Posted by Barbara and Ron at 11:24 PM