For a little clarification of our fabulous parking situation at the Balloon Fiesta, I shamelessly stole Donna's aerial view off her Facebook page.  For an account of their crewing experience, see Donna and Bob's blog here. 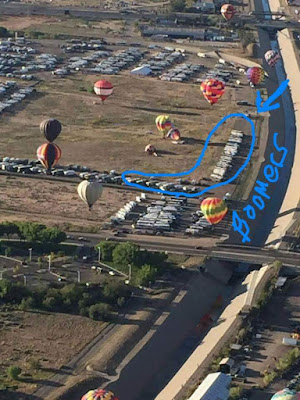 As you can see, we were lined up around an open field which was used by some of the balloons as a landing field.  Because we were over at the launch field both of the previous mornings, we never saw them fly overhead or land.  The third morning, as we were preparing to leave, we thought we might see some action.

Little did we know it was the day of a contest involving that same field.  The balloons were challenged to drop something (I should have found out what) onto a target in the middle of the open field.

I headed to the south end to watch them come from the launch field across Alameda.  At first it looked like all the balloons were headed straight to the field. 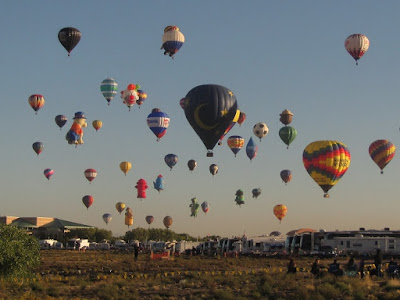 But alas, that fickle breeze shifted all of them slightly to the east. 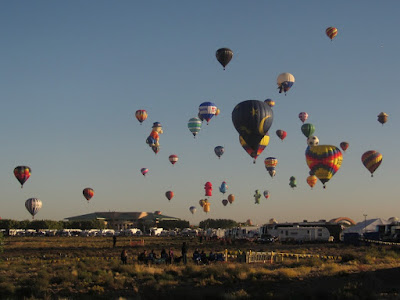 Moving round to that side, I watched as they all passed over the main section of the RV parking.
The dog balloon in the upper left did drop their object and I saw some ribbons falling.  I spoke to a spectator in the northeast corner and she said it fell on the hitch of the trailer next to her.  Good thing it didn’t bop her on the head. 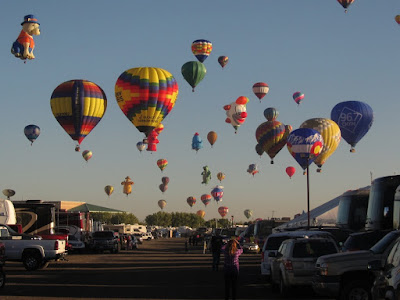 The one that came closest to where we were parked on the west side was this one that landed (I think just temporarily) in the canal behind us.  Our rig is second from the left. 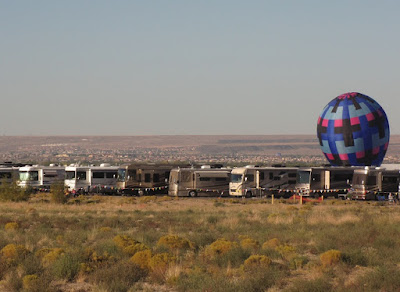 After all the morning excitement, we hitched up and continued our southwestward trek home.  We passed the Very Large Array (VLA) in Socorro County, New Mexico.  We didn’t stop this time, but it is a fascinating place reminiscent of the movie Contact. 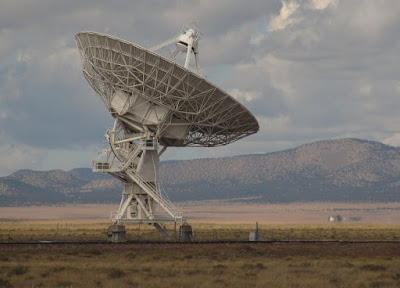 It’s a radio astronomy observatory with twenty-seven 25-meter antennae positioned on a Y-shaped track.  Each leg of the Y is 21 km or 13 miles long and the antennae are moved to different distances along the track.  The first time we visited, the units were very close together.  This time it looked like they were using all 13 miles of each leg.  You can barely see the next dish in line. 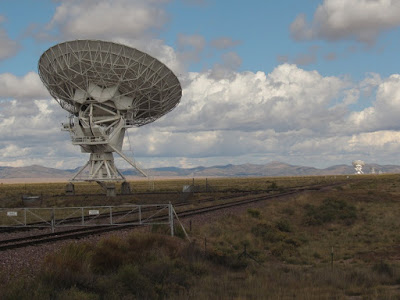 We stopped in Datil Well campground, where we saw this interesting historical sign.  Although it doesn't say it on this sign, they drove cattle along this route until 1971 and the CCC had built the local wells in the 1930s.  Somehow I don’t think of cattle drives as being that recent. 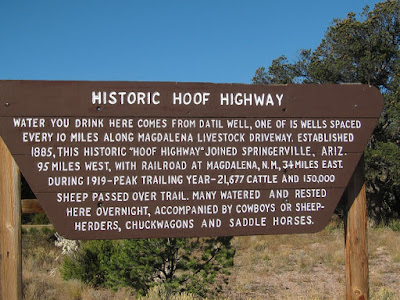