In an effort to catch up a bit, I’m going to consolidate our stay in Santa Fe into one post.  Never fear, though, since half of the time was taken up with mundane things like laundry and shopping.

From our parking spot at the Elks, we could see leaf color up in the Sangre de Cristo Mountains so we drove up to 9000 feet to take a hike among the tallest aspen trees I had ever seen.  But, sadly, they were still green. 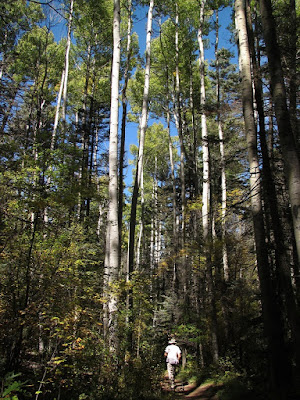 Sometime after my neck became sore from looking up, I noticed aspen leaves on the trail. 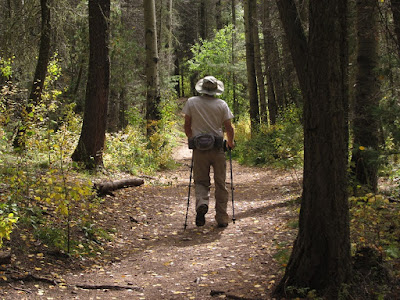 Hey! There are some colored leaves overhead! 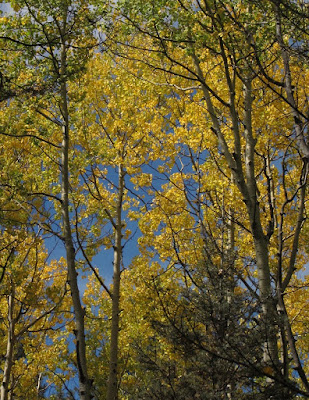 But we knew we could do better.  So after our hike, we drove even higher.  I love yellow aspens, but ones with some red are even better. 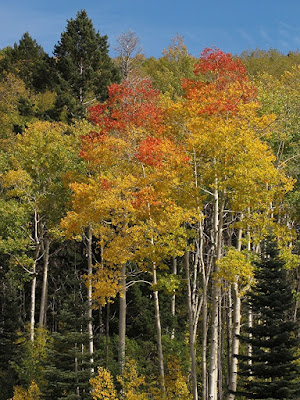 Then we rounded curve in the road and hit the jackpot! 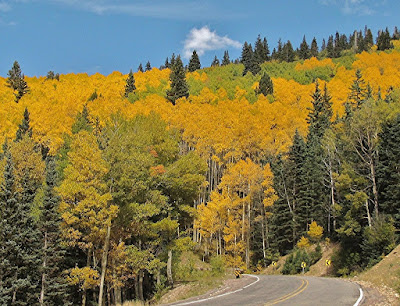 And the top of the mountain was a nice patchwork color. 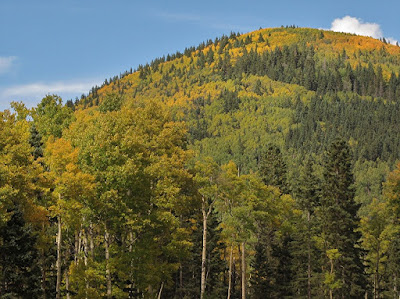 Another day we took the city trolley tour.  The guide talked knowledgeably about the town history and buildings, but spent a lot of time on Canyon Road where all the art dealers are located.  We saw lots of interesting pieces right from the bus.  I liked the way this sheep looked with the red Virginia creeper, 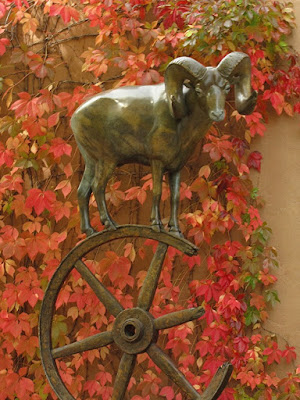 As well as this imposing Budda. 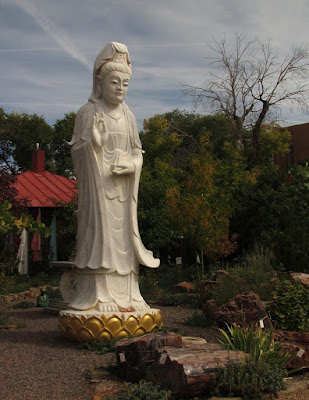 I thought this stately Native American looked appropriate next to the large cottonwood tree, 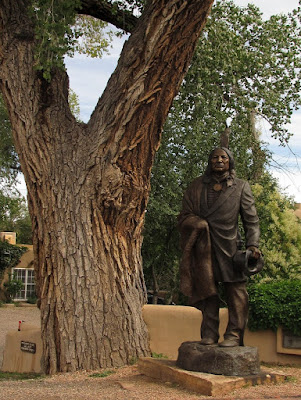 And I loved the recycled wolf, 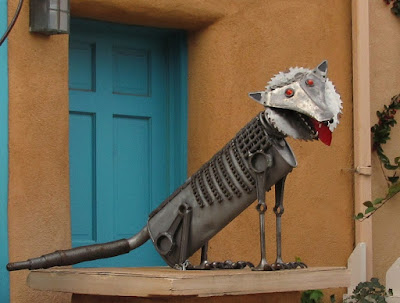 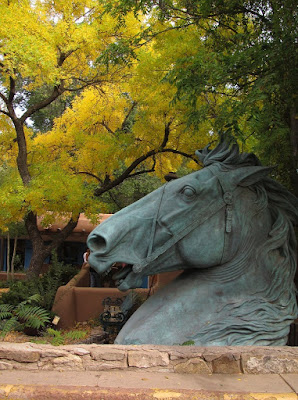 After we got off the trolley, we stopped for lunch where Ron had pretty blue corn tacos and I had . . . well, I don’t remember because I didn’t take a picture of it. 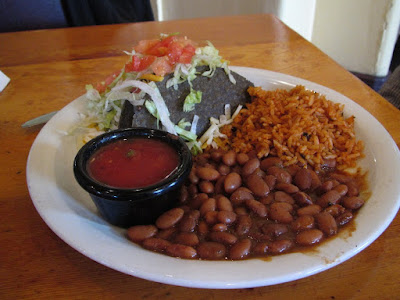 Then we visited a few places that the tour guide had pointed out.  The Cathedral Basilica of St. Francis of Assisi was built between 1869 and 1886 around an older adobe church, which was then dismantled.  The two towers were planned to be topped with 160-foot steeples which were never built. 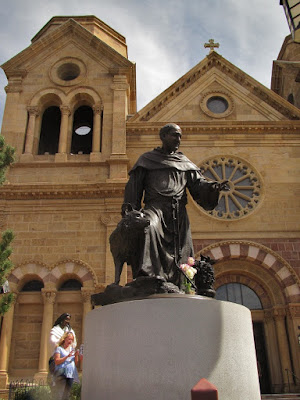 The magnificent bronze doors were added during the 1986 restoration. 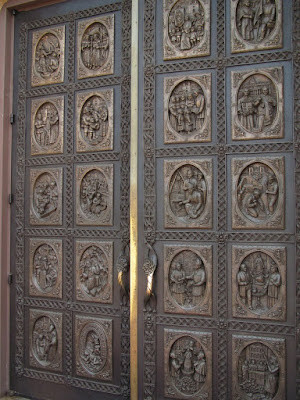 This is an active church with regular services. 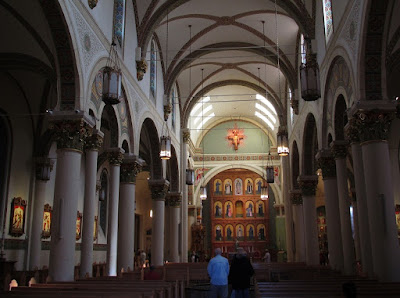 In a special alcove is the oldest venerated image of the Blessed Mother in the United States.  She was brought to Santa Fe in 1625 and placed in the parish church located in Santa Fe at that time. 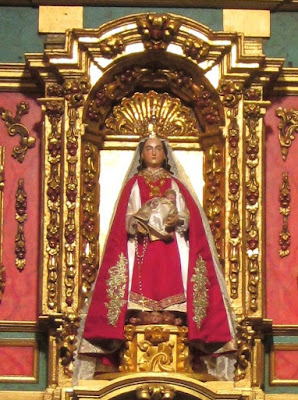 We also made a stop at Loretto Chapel, 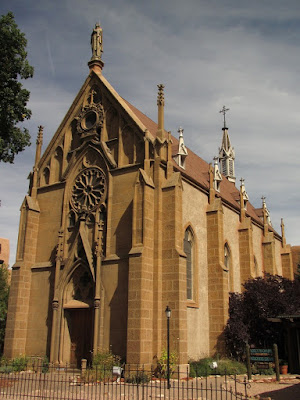 Which has been deconsecrated and bought by the Loretto Inn so they can charge visitors to enter.  The draw is the ‘Miraculous Stair’, so called because of the legend surrounding its construction and builder. 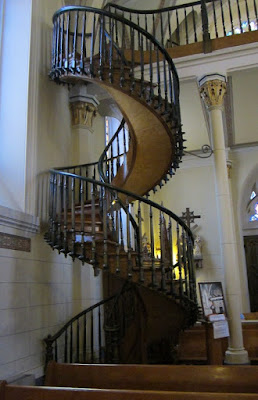 Our last stop of the day was the state capitol building which is unusual but fits in perfectly with New Mexico and especially Santa Fe architecture. 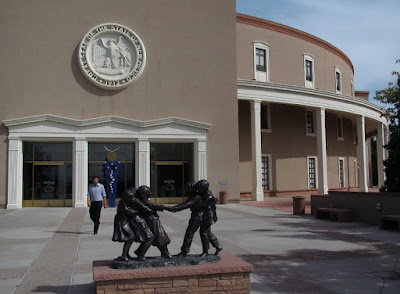 Although the building has no dome, there is a pretty interior rotunda. 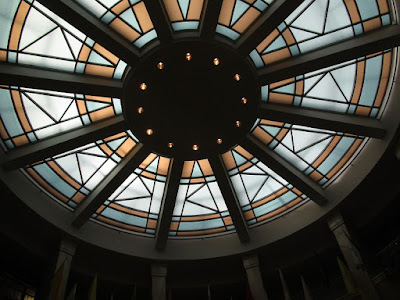 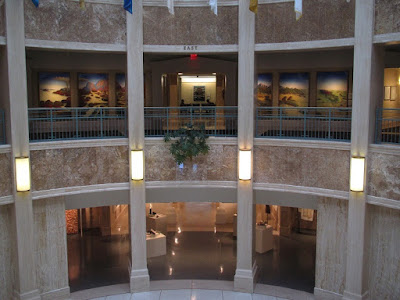 The building houses an amazing collection of art by artists who live and work in New Mexico.   We enjoyed viewing the beautiful artwork as we wandered around all the public areas.